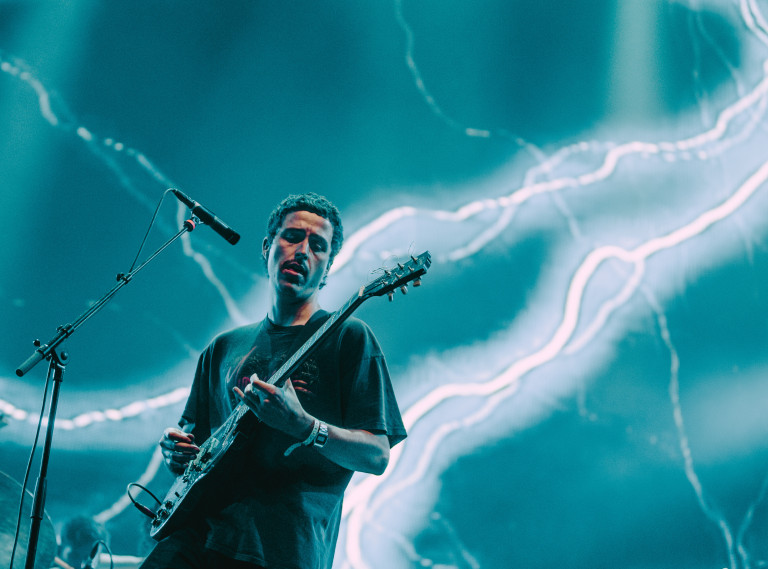 Peak festival season may be drawing to a close, but where the weather stays warm year round, outdoor music also continues to thrive. Desert Daze Music Festival, coming up in the middle of October from the 12th-14th, is proof of this. Held on a lakeside beach in Lake Perris, California, the festival provides a refuge from the traffic and hustle of Los Angeles, catering to fans of indie rock and psychedelia since its inception six years ago. Though not the 120+ local acts over 11 consecutive days of its first year, Desert Daze still hosts a swath of West Coast bands while attracting an increasingly impressive roster of international acts. Some of their biggest performers have included Iggy Pop, Courtney Barnett & Kurt Vile, Ariel Pink, Unknown Mortal Orchestra, Television, Thee Oh Sees, and Deerhunter, though their careful curation is bound to please fans of such artists with dozens of lesser-known groups. This year’s lineup of over 60 artists will be no exception, and the ascension of some select bands highlighted below can be tracked through the posters of Desert Daze’s past. Text: Dylan Lai.

This band hardly needs any introduction at this point. Hailing from Perth, Australia, Kevin Parker’s masterful creations smashed into the mainstream with 2015’s Currents, and though only a B-sides’ worth of material has been released since then, his popularity amongst fans and other artists has only grown. Parker records Tame Impala’s albums almost entirely himself, but his touring bandmates are all exceptional musicians, many with their own projects such as Pond and Gum (both also performing at Desert Daze) to which Parker sometimes contributes. Some say he singlehandedly revived psychedelia. Others say he bathes with his scarf on. See them live to decide for yourself!

Anyone who claims that “rock is dead” must be thinking of the bro bands of old, because these all-female rockers from Madrid inject their tunes with enough messy millennial bluntness to do more than keep it alive. The garage revival of the early aughts that radiated out from New York has apparently just reached Spain and awoken something in a new generation of bands. Fed up with hordes of their EDM-blasting contemporaries, the members of Hinds have turned their youthful energy instead toward singing about love and life outside the parameters of conventional romance.

This year marks the third time Warpaint will be performing at Desert Daze. The festival’s frequent support for the band is surely helped by the proximity to their LA base of operations, but it also speaks to their ability to make great music. As is expected for a female band, comparisons are made to the likes of the Cocteau Twins and Siouxsie & the Banshees, but the group’s sound also draws on modern R&B and even hip-hop. Seeing Warpaint perform so close to home at the festival that has fostered them since their beginnings is sure to be a memorable experience.

Last year, King Gizzard decided to put out as many albums as there are words in their name (including “the”). That second part isn’t actually true, but their five newest albums, each with its own musical concept, are no lie. Part of their productivity doubtlessly comes from the combined creativity of seven talented minds, but their numbers also translate to a boisterous live show and the ability to fully flesh out their arrangements on stage. Now is the chance to see them before they descend into another prolific hibernation.

Just months on the tails of his own double length release, Freedom’s Goblin, Ty Segall teamed up with his Drag City label-mate Tim Presley to put out a joint celebration of garage and psychedelic rock. Though it’s their second time collaborating on an album and the second time each of their names appears on the Desert Daze lineup, this year marks the first they perform at the festival together. Segall already has another album coming soon, so it wouldn’t be a surprise to hear more than a few unreleased songs on stage.

Pioneers of the meticulously crafted washes of guitar sound that established shoegaze as a 90’s mainstay, this band tours almost as rarely as they put out new music. That is saying something, since the last time they released anything was 22 years after their 1991 sophomore album, the legendary Loveless. They must have set an example, since fellow shoegazers Slowdive (who will also be at Desert Daze), took the same multi-decade break between the self-titled album released last year and their previous work. Petition to change the genre name to 22-gaze, anyone? MBV’s front-man Kevin Shields promised new music this year, and though the window of opportunity for that to be true is diminishing, the chance to see them live in October is a sure bet.

Desert Daze takes place in Lake Perris, CA from 12 to 14 October. Get your tickets here, and head here for more information. Listen to the official Desert Daze playlist below.