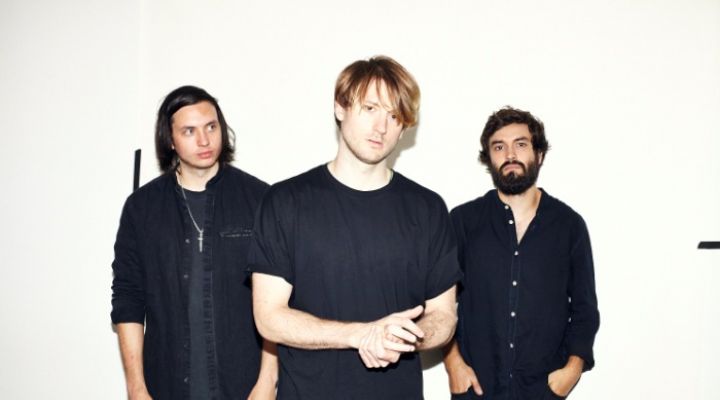 Dinosaur Pile-Up Talk Us Through Their New Record

UK trio Dinosaur Pile-Up have lately taken the world by storm, releasing a slew of grunge-heavy rock bangers in quick succession whilst touring Europe with the likes of Weezer. New album Eleven Eleven recently came out on European soil, having received rave reviews from critics the world over for their infectious blend of grunge rock. We caught up with Matt Bigland, Mike Sheils and Jim Cratchley backstage at the historic Paradiso in Amsterdam as they talked us through every song on the record.

11:11
“11:11 was the first song I wrote for the album that sounded like the new album. That was the first tune that made me go, “shit, that’s the sound of the new record”, or at least what I’d envisaged to be the new record. That only came from when I took it home as a demo. We’d also been fucking around with that riff in rehearsal, but we thought it was too stupid or heavy to do anything with. I took it home and played around with it, and it became that. Lyrically, 11:11 is a bit vague.”

RED AND PURPLE
“That started off as a wicked intro we all loved. We were dicking around with it for quite a while before anything came of it, and it’s actually one of my favourite songs on the album. It’s about feeling ostracized or isolated in some sort of way. It’s got a wicked riff, yeah.”

GRIM VALENTINE
“Now that I think about it, I can’t even remember when I wrote these songs. We can just describe the song, though. Grim Valentine is a simple song with a simple chorus. It’s heavy and melodic but straightforward at the same time. There are some discordant bends which we tried to get into a few songs, and they’re kind of dotted around the whole album. I wanted the solo to sound quite nonchalant, almost as if I didn’t give a shit. It’s weird that, doing a track-by-track. It makes me realize how vacant I am when it comes to talking about the songs.”

FRIEND OF MINE
“Friend of Mine’s interesting. When we came out of pre-production, Tom Dalgety (producer) was like, “you have some great songs, but just to double check: you don’t have any other demos at all?” Friend of Mine was one of those demos, and I’d always felt like it didn’t fit in with the rest of the album. There’s something about it which is different, almost tongue in cheek. Tom thought it was fucking awesome, and he basically told us that we had to do it. I wouldn’t have put it on the record otherwise. I’m glad I did, though, because it’s one of my favourites. It’s a really great tune.”

NOTHING PERSONAL
“Nothing Personal is a really intense track, a bit like Nirvana’s Territorial Pissings. It’s actually the heaviest bits of two separate songs spliced together. When we were in pre-production with Tom, we had these two songs which we loved different bits of. They were really fast, and Tom decided to cut them up and turn them into one proper track. Before he did this, I’d actually had trouble with one of the songs, so when Tom suggested to splice up the tracks I thought we should give it a go. We worked on that track really quickly; in fact, we tracked the drums alone for the whole record within two days!”

ANXIETY TRIP
“Anxiety Trip was one of the heaviest tunes that we had going into the record, but we only had a verse and chorus. Tom left us in the studio when we worked on it, and he said: “I’m going to leave for three hours, and when I come back I want you to have figured out what comes after the second chorus”. So he just left us, and we ended up just putting this insane breakdown on it which could have even been too heavy. We recorded it on the desk while he was out, and when he came in we put it on really loud and he just sat in his chair and put his hands on his face. He’s well into his metal, and he just started screaming “yes!” It was a weird moment to experience, because he was so into it. “That’s what you were meant to do!” he continued, which was really cool.”

MIGHT AS WELL
“When we were touring India, I was listening to Might As Well on the plane or in the van and I thought that the demo was really shit. The melody was really awesome, though. We spent ages trying to get the drop right, and then trying to connect it into the slightly-longer chorus. It was something about that demo, though; the song was there, but we just needed to realize how awesome it was. It’s really melodic, but the chord progression is really simple. It’s got all the signs of the band on it, all in the space of one tune.”

GIMME SOMETHING
“Short little one. It’s a punch in the face. I remember writing that and thinking that it was really cool. It’s only ninety seconds long, which is unbelievable. I was wondering if we would ever finish it, but we didn’t so we just put it on the album the way it was. It’s a satisfyingly standard rock song which builds up to an awesome end.”

BAD PENNY
“Bad Penny is our ode to Motorhead, because it’s basically a Motorhead song. Vibe-wise it’s heavy and unrelenting. In fact, it’s even got a reference to Motorhead in the song. I used to listen to Motorhead at stuff when I was a kid at school, and nobody else did which was weird. Anyway, it’s just another song about being ostracized or whatever and it probably has the best riff on the whole record. I love how it sounds like old-school metal, it’s real nice.”

CRYSTALLINE
“Crystalline is a really nice tune, I love the chorus. I got the name and idea for Crystalline during one of our American tours. We would always buy these really cheap bottles of water to drink on the road, and the brand is called Crystalline. I think I got the name from there, but I didn’t exactly realize it till a while later. I saw it the other day and I thought, “Fuck, that’s where it’s from!” It’s a softer tune too, it’s more melodic and sensitive. It’s about being dissatisfied with certain things, and the track itself really reminds me of Fleetwood Mac.”

WILLOW TREE
“I’d forgotten about Willow Tree. It’s so unrelenting, and it reminds me of Smashing Pumpkins. It’s a bit darker, isn’t it? It has a really sick riff. There’s a willow tree in a park down the road from my flat; it’s called Waterloo Park. When I wrote Willow Tree I was thinking about that particular tree. Trivia.”

CROSS MY HEART
“Cross My Heart is the bonus song, and it’s a bit different to the rest. It’s so removed from the album that I had to campaign quite hard to get it on there. It’s a floaty, almost dreamy song which is also quite sensitive. It’s so floaty and dreamy because I’d finished writing it on the plane back from Japan to London. Everybody on the plane was asleep apart from me, and I really wanted to sleep but I can’t sleep for shit on planes. You know how the sound on planes is really weird? That high-pressure turbulent sound makes everything sound really nasal, and I remember writing that tune about leaving Japan and our experiences out there. Something about leaving Japan made everything seem very nostalgic. It’s quite nice to listen to after you’ve been battered by the rest of the album. It’s nice, though, because I don’t want to be one of those one-dimensional bands who write all the same kinds of songs. You’ve got songs like Bad Penny; I love that shit, but I want to be able to do other things. I grew up on bands like The Beatles. You don’t always have to be heavy to write a killer tune. Cross My Heart is on there because it has such a different vibe to the rest of the record, and it’s definitely an area of music which we could explore more when we’re all broken from playing riffs all the time.”

Eleven Eleven is out now. Stream it below.