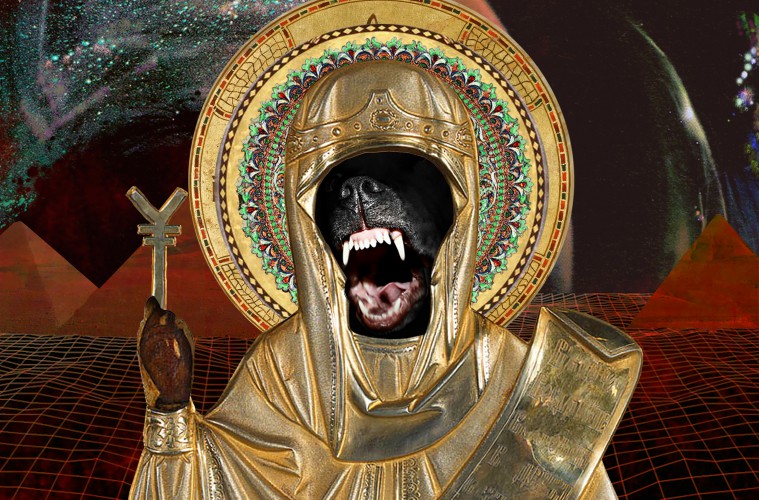 Technology is quite the double-edged sword, and DON BROCO know it. Their third studio album (conveniently dubbed Technology, a one-word title just like previous releases) arrives in a world so dependent on technological advancement and progress that you’d be a fool for assuming it’s always been this way. On the contrary, though; when Rob Damiani and co. put out their acclaimed studio album Priorities in 2012, social media was still a blossoming concept and MySpace existed in its old format alongside compatriots Facebook. Let’s not forget that Instagram was an alien concept to many, and that you couldn’t even tweet from your phone unless you sent it via an email. Fast forward six years, and all but one thing has changed: Don Broco’s ability to put out powerful music. Technology is the follow-up to 2015’s pumped up Automatic, and as with everything the Bedford quartet do it finds itself reflecting on the world we live in today in a way only they know how.

It’s important to note that Technology is not a direct concept album about why our phones are here to slit our throats in our sleep, or something else dystopian along those lines. Instead, the record is here to present a handful subtle pointers which underpin many of frontman Damiani’s thought-provoking talking points. The self-titled track opener, Technology, utilizes drum pads and Si Delaney’s clattering guitar lines to aid Damiani in his missives. “Don’t take a picture hourly, I’ve seen them all” sings the vocalist as he takes out time to bemoan social media’s ‘instant’ impact and the way in which it presents us with false ideals of the perfect life. “I had a friend, now he works out, I had a friend, can’t put his camera down” sounds like a sly dig at all of those guilty of sharing their every waking moment, something which very clearly irks Damiani. All of this is underpinned by tight beats courtesy of drummer Matt Donnelly and his rhythmic compatriot, bassist Tom Doyle. Over the course of the album they find themselves forming an incendiary duo whose main purposes are to accompany Damiani’s vocals and Delaney’s six-string wonders. Stay Ignorant invites the listener to contemplate straying away from technological overuse, with Damiani referencing the shooting down of satellites. It’s a heavy, in-your-face collection of noise which, despite all its grungy tendencies, finds plenty of room for Doyle and Donnelly to head down a funky, groove-laden path. T-Shirt Song is the third of five consecutive opening tracks which the band shared in advance, allowing Damiani to play with his hearstrings during the chorus. “I wouldn’t be who I’d be without you” he sings, leaving room for subtle vulnerability. It’s a powerful track, something which is largely down to the consistently strong guitar work provided by Delaney. It’s on Technology where the guitarist’s skills well and truly come to fruition, with his take on various different playing styles ticking all the right boxes. T-Shirt Song is the first instance of brass on Technology, something which might seem like an alien concept within the wider genre of music Don Broco operate in, but which Damiani and co. execute with bombast.

The first three tracks on the record all followed similair, slightly predictable (in a good way) formats, but all of this is thrown out of the window on the tongue-in-cheek Come Out to LA. One of the first talking points here is the fact that the bulk of vocal duties have been handed over to Donnelly, whose autotuned vocals play on the “everyone can be a star in Hollywood”-concept. “Come out to LA, write a few songs, maybe you can stay, stay in Hollywood” forms the basic foundation of the track’s lyrical content, with EDM-lite synths aiding Donnelly ahead of a destructive chorus. Damiani takes over in the chorus, his voice sounding somewhat altered and warped (technology, huh?). Come out to LA’s simple and digestible formula allows Donnelly plenty of room to express his own creative freedom. Its subject matter, as you can probably anticipate, concerns the state of ‘making it’ in Hollywood and how you can always “fake it” if things go awry. There’s plenty of truth to their missives on this track, which goes to show how predictable and formulaic the American entertainment walhalla can be. Pretty brings things down to a more personal level lyrically, with Damiani now in control. Its riff hits you harder than a battering ram, and there’s some manic synths in and amongst the mix which add an extra sense of musical malice. Damiani describes an encounter he had with a girl who seemed perfect, until he heard her standpoint on particular societal issues. “I have mostly been spending my time with this person I don’t like, just because they’re very good looking” he sings before Delaney takes over with some top class riff action. It’s one of the best tracks on the album, and possibly one of the best things the Bedford quartet have ever put out. The Blues introduces pulsating bass stabs early on, with drum pads and some synth lines vaguely making themselves known in the background. The track powers along at a slower pace to its predecessors, still packing a punch in its lyrical delivery. “Got to play it cool, play it cool” declares Damiani during the bridge, one which places emphasis on deliberately autotuned vocals and underpinning handclap beats. The anthemic and impactful Tightrope follows, with the story behind this track’s lyrical development definitely worth noting to fully understand its context. Speaking of the stadium-ready track in an interview, Damiani described a story of his mother discovering the existence of a family member nobody knew about. The emotional impact of this story is reflected in Damiani’s vocal delivery, which sounds equal parts fragile and powerful. “Won’t you stay a while?” he asks during the chorus, his message hitting home harder than anything else on the record. Everybody, which by now has cemented its status as fan favourite, contains the next big riffs on Technology. It’s also the first track on the album to make good use of the famous cowbell, an instrument which Don Broco definitely learnt to love on this record. “No one’s ever seen me like this” declares Damiani ahead of the ‘chorus’ (read: Delaney Riff Machine), one which doesn’t focus half as much on Damiani’s vocals as it does on killer riffs. If there were ever a Don Broco song which’d make you want to punch someone, then Everybody is that song. Its brutal combination of the DRM, waspy synths and pounding rhythms make for the perfect pit opener. Nothing else on Technology even comes close, not even the cowbell-centric rhythms on Greatness; it’s a wonder to witness such a laughable percussive object used so tastefully. “I’ve gotta get outta here, you’re dragging me down” sings Damiani on Greatness, a track whose main focus lies in an arena rock chorus and powerful riffs. “Give it to me, all your fucking greatness” continues Damiani, sounding both vengeful and optimistic in his approach. It precedes one of the record’s best tracks, Porkies. This is the sound of an extremely angry Don Broco, with the tone set from the off by means of grisly bass stabs and pulsating synths. “You’re gonna lie to me anyway” declares Damiani instantly, his vocals heavier and darker than ever before. There’s not much to say about this track apart from that it’s exactly the kind of song you need if all you want to do is punch a hole in your bedroom wall. Doyle’s bass licks midway add a sense of tentative contrast, before Delaney’s powerful riffs enter the frame once more. “You’re gonna fuck with me anyway” growls Damiani, rallying himself up for a fight as he leaves no stone unturned.

As the album heads towards a close, Got to Be You allows for some room to tone things down and inject emotion into the album. There’s some distinctly U2-esque about the guitars on this track, with Delaney’s opening strums sounding like they’d be right at home on anything circa The Joshua Tree era. Not that this distinct sonic likeness should take away from the track’s overall quality, though; Got to Be You is the first proper instance of Don Broco’s collective fragility and emotion, something which is spearheaded by Damiani’s lyrics and some Bastille-lite background chants. Everything well and truly comes together when  ̷T̷h̷e̷ ̷E̷d̷g̷e̷  Delaney returns with some more jangly guitars towards the end, making for what could’ve been a perfect album closer but instead serves as a breather for Technology’s closing trio. The Chili Con Carne-referencing Good Listener utilizes chopped up vocal samples and party-starting riffs (think The Blackout, but less destructive), bringing the album right back up to speed and throwing some carefree vibes into the mix. Damiani references flawed Facebook friend suggestions as he opens up about his daily likes and dislikes, rounding off each verse with a sarcastic “thanks a lot for listening to me”. It’s one of the more tongue-in-cheek tracks on the record, even if it still carries some kind of conceptual purpose which falls in line with the album title. Penultimate track￥ reintroduces Good Listener’s chopped up vocal samples, making some solid use of them and allowing them to form the track’s backbone. It’s one of the more formulaic tracks on the album, even if the aforementioned vocal samples help it stand out to an extent. The tribalist percussion and blues-y tones which kick off Something to Drink signify that the end of Technology is in sight, with Damiani’s raw and unedited vocals standing out on a song which doesn’t hit as hard as you’d hoped. The record comes to a close on a poignant observation by Damiani, one which looks forward more than it does reflect: “We’ve had a bad year. Forget and erase it”.

On Technology, Don Broco have proven exactly why they’re considered one of Britain’s best bands by many a renowned critic. Although its fourteen-track running length could be considered by some as being a tad too long, it does allow the Bedford outfit to take the listener on a long-winded journey. Damiani’s lyrical content has only improved over time, with his personal insights on technological progression (or regression, however you wish to perceive it) and everyday observations really standing out. From the regret which greets him when spending time with unsavoury-yet-attractive types (Pretty) to recounting an emotional family story (Got to Be You), and via plenty of social media criticism (Technology & Stay Ignorant), Damiani has managed to exercise his creative skill sublimely and elevate it to the best possible level. The same goes for the rest of his band, whose own personal skills have definitely been put to the best possible use on Technology. Guitarist Si Delaney’s riffs hit harder than ever before, with the unrivalled Donnelly & Doyle rhythm section forming a solid backbone to proceedings. It may only be January, but don’t be surprised if Technology ends up topping year-end lists and elevating Don Broco to heights higher than anyone could have previously imagined. Technology comes out tomorrow (2 February) via SharpTone Records.