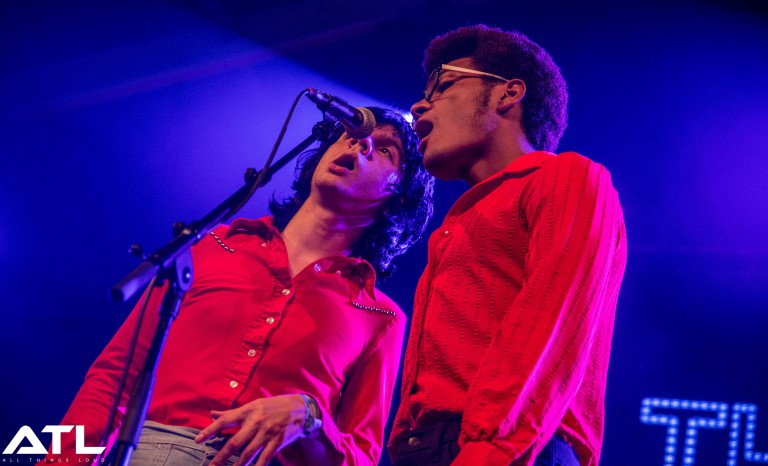 Down the Rabbit Hole: The 15 Best Performances

Last weekend saw the Dutch vicinity of Beuningen transform into a hippie paradise for the fourth edition of Down the Rabbit Hole. The weekender, which now welcomes some 25,000 visitors, saw sets across a broad range of genres and styles which proved that there really was something for everyone. We’ve rounded up the 15 performances which, in our eyes, were the best all weekend. Find out why below.

15 HAMILTON LEITHAUSER
What we said: “Down the Rabbit Hole’s final day was all about small and new surprises, amongst them native New Yorker Hamilton Leithauser, whose blend of indie, folk and country sparked a large crowd at the tiny Fuzzy Lop stage. Leithauser and his Texas-based band put out new album I Had a Dream That You Were Mine last year together with Vampire Weekend’s Rostam, leaning heavily towards it for the duration of the show. His set turned out to be more than just a bit of early-day filler; rather, it was an exciting example of what today’s future headliners may look like in the coming years.”

14 BONOBO
What we said: “The bulk of the evening seemed to have been reserved by forward-thinking electronic music, starting with producer Bonobo and his eccentrically stunning live show, one which was bathed in lucid video screen productions depicting surreal landscapes. These visuals accompanied Bonobo’s set well, with the man himself (the British Simon Green) positioning himself towards the back of the stage as his band took centre stage. New album Migration (out now via Ninja Tune) translated very well into the packed Hotot, one which was longing for more after Green and co. left the stage.” 13 DE STAAT
What we said: “Torre Florim and co. have been considered by many as Down the Rabbit Hole’s very own house band, making some sort of appearance on and offstage every year. This year, they were onstage as they took to a manically packed Vurige Veld to rock the smallest stage on the whole festival site. The stage shook from left to right during set opener Witch Doctor, which demonstrated De Staat’s ability to cause carnage everywhere they go.” 12 MODERAT
What we said: “Apparat and Modeselektor hybrid Moderat had the honour of headlining the festival’s first day in flourishing style. The trio took to the stage just before 11pm as they were bathed in layers of smoke, throwing popular track A New Error into the set early on and sending out a signal of defiance to all other acts appearing throughout the day: Moderat will make you move like no other. And they seemed to this with little difficulty.” 11 TEMPLES
What we said: “Kettering psych outfit (and modern day cult heroes) Temples took new album Volcano to a decently-filled Hotot for a mid-afternoon set which ticked all of the right boxes. Set opener All Join In incited the psychedelic heavens to erupt, with technical issues not stopping frontman James Bagshaw from giving it his all as the band powered into early cut Colours to Life. It must be admitted that the band’s live show has seen better days, but that looks like something which can be attributed more to the sparse and relaxed crowd than the band themselves.” 10 JULIA JACKLIN
What we said: “Australian songstress Julia Jacklin opened the day with her serene voice over on the rehomed Fuzzy Lop stage, which has been relocated to a far flung corner of the ever-changing festival site. Last year’s debut album Don’t Let the Kids Win featured heavily, with an early highlight appearing in the form of the twinkling Leadlight, a track perfectly suited to Jacklin’s serene voice.” 9 CAGE THE ELEPHANT
What we said: “Kentucky rockers Cage the Elephant caused the first major bout of chaos of the day, bringing the critically acclaimed Tell Me I’m Pretty to life in front of a packed tent. Set opener Cry Baby instantly enabled the sleepless guitarist Brad Shultz to descend into the crowd, making his way deeper into the tent with every wailed, Mick Jagger-esque note that came out of vocalist brother Matt’s mouth. There’s an air of rawness to Cage the Elephant’s live show which is seldom seen in alternative music anno 2017, with new acoustic album Unpeeled set to showcase a more sensitive side to the band when it comes out at the end of July. There are many directions in which this band could go in, however onwards and upwards seems the only logical one.” 8 POND
What we said: “Aussie hotshots POND took over the Teddy Widder stage during the later stages of the afternoon, having recently traded their oddball psychedelia in for a healthy dose of pop-infused rock which did nothing in holding back chaotic frontman Nick Allbrook. Allbrook, formerly of Tame Impala fame alongside fellow POND member Jay Watson, descended into the crowd during second track Elvis’ Flaming Star, a groove-based rock’n’roll banger far removed from the music POND makes nowadays. Newer single Sweep Me Off My Feet made for an anthemic moment in the set, before older, scuzzier cuts all featured in sharp succession. They may not be the direct heirs to the Australian psychedelia throne, but they certainly come close.” 7 SOULWAX
What we said: “The Dewaele brothers in Soulwax took their exciting production to a packed Hotot for what looked to be the biggest party of the day, and one which definitely didn’t go unnoticed. Kicking off their set with the pulsating Do You Want to Get Into Trouble?, Soulwax managed to get fans old and new moving at the click of a finger. They chucked popular single Krack in early on, setting the tent on fire with its manic drop and exquisite production value. Soulwax are already being hailed as the band of the summer, and that should come as a surprise to absolutely nobody.” 6 MAGGIE ROGERS
What we said: “Maryland vocalist Maggie Rogers opened the day on the Teddy Widder stage, proving an early highlight with her sickly sweet voice and eye-catching dance moves. Donning an outfit somewhat reminiscent of Arcade Fire’s Regine Chassagne, Rogers took to the stage in support of new EP Now That the Light is Fading, which is purported to be a precursor for her as-yet-untitled third studio album. Early set highlight Dog Years injected some tender emotion into the show, one which saw the 23 year old pull a decently sized crowd.”

5 SLAVES
What we said: “Punkers Slaves closed out the first day in rowdy fashion, utilizing the political commentary on new album Take Control to provide Beuningen with show-stopping renditions of the scuzzy Cheer Up London, synth-infused STDs/PHDs and manic closer The Hunter. Laurie Vincent and Isaac Holmes tend to do everything in their power to get the crowd moving, and they did so last night with minimal effort and maximum impact, just like they always do.”

4 DE LA SOUL
What we said: “If there’s one thing that Down the Rabbit Hole’s final day made sure of, then it was the abundance of party moments across the board. Long Island rappers De La Soul brought their huge live band to the Hotot for a celebration of everything good about rap and hip-hop, with the collective making good use of headliner Oscar & the Wolf’s catwalk as they descended into the crowd on various occasions to pit left and right against one another in a loudness war. There’s very little about De La Soul that you could dislike, regardless of how hard you try.” 3 BENJAMIN CLEMENTINE
What we said: “One of the day’s superb highlights came courtesy of obscure part poet/part vocalist Benjamin Clementine, whose entire Teddy Widder set oozed with class, serenity and an absolute feeling of being part of something. Backed by a band all clad in white and blue boiler suits (including a five-piece choir), the vocalist descended upon his grand piano wearing what looked like silver carpet. It certainly added to the sheen surrounding this man, who managed to get the entire tent chanting along to set highlight Condolence. Perusing the stage like a madman, Clementine raised his arms up high as he got different parts of the crowd involved at different times, proving once and for all how much of a fantastic showman he is. Who knows where he’s headed, but it sure is good.” 2 THE AVALANCHES
What we said: “One band who have spent quite some time building up momentum is the Australian sampling machine we refer to as The Avalanches. Seminal studio album Since I Left You dates back all the way to 2000, with its equally intriguing and ground-breaking follow-up Wildflower seeing the light of day last summer. Live, The Avalanches transform their sample-led tracks into a party fit for all by incorporating vocal appearances by MC Spank Rock and vocalist Eliza Wolfgramm, both of whom accompany core members Robbie Chater and Tony Di Blasi with effortless ease. Set opener Because I’m Me demonstrated the best aspects of the band in one doo-wop themed track as Spank Rock ensured that nobody stood still, not even for a minute. Classic tracks Since I Left You and Frontier Psychiatrist made for the biggest responses, especially for an act whose appearances on Dutch soil have been few and far between.” 1 THE LEMON TWIGS
What we said: “Another band who have become no strangers to controlling a crowd, despite their young age, are The Lemon Twigs. Brotherly duo Brian and Michael D’Addario bounce off each other like no other sibling team, with debut album Do Hollywood throwing things back to the golden days of the 60s and 70s. Early highlight These Words saw lilting keys (courtesy of Danny Ayala) and rhythmic bass (courtesy of Megan Zeankowski) combine to form a solid part of the Twigs’ coherent whole, with a handful of new songs from their upcoming EP also popping up throughout the set. There’s no doubt that the D’Addario brothers are two of music’s modern day maestro’s, so here’s hoping that we hear from them as time goes by and as these young lads mature into fully-fledged artists.”