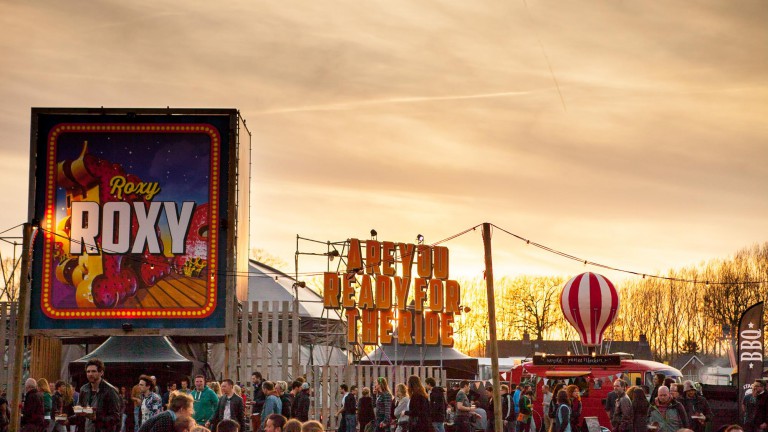 Enter Shikari Cause Carnage During Second Day of Paaspop

Following a cold, mud-drenched opening day, Paaspop Festival continued with stunning performances from Enter Shikari, MY BABY, De Staat and headliners The Prodigy. The festival’s second day was a sunny one, having also sold out fully halfway through. With so many people onsite, it was all but guaranteed that chaos would ensue for the day’s most anticipated sets. This chaos started early on when Dutch outfit HAEVN took to the Jack Daniel’s Stage shortly after 2pm, packing out the tent to the rafters for their recognizable blend of synth rock, most of it leaning heavily towards darker, demure indie. The band only have two songs to their name, yet it hasn’t stopped them from selling out the Paradiso and being hailed as one of this year’s success stories. The set may have been tight musically, however it lacked a certain sense of enthusiasm which other bands utilized so well. One of these bands was Portugal & Angola’s very own Throes & the Shine, who embraced summer vibes for their eclectic mix of party rock, salsa and African dance rhythms. The four-piece, who all wore colour-coordinated outfits which matched their music, initially took to an empty tent, with the show ending in front of an extremely full tent. It wasn’t jam-packed, but the overall sense of party vibes and euphoria echoed throughout the whole room. The two frontmen spent plenty of time running around the crowd, energetically pulling off the likes of Batida’s funky percussion rhythms and Tuyeto Mukina’s party atmosphere. Towards the end, the quartet successfully orchestrated a sit-down which (almost) everyone took part in, before taking a massive crowd selfie as everyone pushed forward. As mid-afternoon sets go, Throes & the Shine definitely ensured that not a single soul remained static during their 45-minute long set.

Throes & the Shine weren’t the only party-centric band on duty in Schijndel yesterday, with the Barcelona-based Che Sudaka swiftly following over in the Phoenix. Combining some more DJ-focussed elements with punky reggae rhythms, Sudaka managed to get a good chunk of the crowd involved for a while. It was evident that not everyone was into it, yet that’s what you get in a tent which is way too big for a band. Had you also put Che Sudaka in the Roxy, then its screen-covered roof would have quite literally been blown off. It wasn’t a party for everyone, though. Over in the Apollo, pop RnB ‘sensation’ Jess Glynne performed her first festival of the year in front of a packed tent. There may have been a lot riding on her hotly-anticipated set, but Glynne herself probably didn’t know that whatsoever. Over the course of her soulless hour, Glynne did little to excite the crowd as she quite literally went “through the motions”. It’s a shame, because Glynne has a great, instantly recognizable voice. Her live band definitely didn’t have an off day, but she certainly did disappoint the masses in Schijndel. Back in the Phoenix, Dutch/New Zealand outfit MY BABY incited a shamanic ritual over the course of their chaotic 60-minute set. Frontwoman Cato van Dijck has an absolute killer voice, with her accompanying band (brother Joost and guitarist Daniel Johnston) keeping the pace going at a constant, progressive rate for the whole set. MY BABY pulled off one of Saturday’s stand-out performances, showing Schijndel that you don’t need a seven-piece band and a whole load of extra’s to make the show exciting (take note, Jess Glynne).

During the early evening, Indian Askin had a go at entertaining a full Jack Daniel’s Stage, although their whole show was bugged by quite off-putting sound issues. From the moment bassist Jasja Offermans took the stage, it was almost impossible to hear anything that was happening under the overpowering sound of her bass. Musically, the band pull off grunge-y rock with hints of indie and shoegaze, all of which accompany frontman Nelson Ayala’s hard-to-hear voice. Indian Askin have so much potential, however the sound let them down at Paaspop in what could have been a memorable show. Over in the Phoenix tent, De Staat performed a show of colossal standards, so much so that it took most people over half an hour to even enter the tent. New album O is one of the best albums released by a Dutch band in a while, with their live show further accompanied by a visuals screen. The pulsating Make Way for the Passenger was a late highlight in the show, before a bouncy Sweatshop led into set closer Witch Doctor. Just like its viral-hit video, menacing frontman Torre Florim jumped into the crowd and summoned a massive circle pit to commence around him. It was absolute chaos, leaving the floor in tatters as a figurative herd of Elephants stamped across it to Witch Doctor’s hard and heavy beats. De Staat are soon to become Holland’s biggest band, without a doubt.

Following De Staat on the same stage were St Albans’ quartet Enter Shikari, a band who are able to guarantee absolute carnage wherever they go. Paaspop was no different, with their visuals-heavy set making for the most spellbinding show of the weekend so far. Just like their show at Lowlands last year, the Rou Reynolds-fronted band left nothing in their destructive path as they performed a career-spanning set. Opening on a reworked version of debut album track Enter Shikari, the four-piece instantly kicked into the track which made it all happen – Sorry, You’re Not a Winner. “Let’s go back to where it all began” declared Reynolds beforehand as he descended into the crowd and broke the stage in the process. Accompanied by a visuals screen, Shikari did nothing other than slay Schijndel for a full hour. Older cuts No Sleep Tonight and The Jester appeared in passing to the delight of manic fans down the front, before newer tracks Slipshod, The One True Colour and The Last Garrison presented themselves as true musical and visual masterpieces. Guitarist Rory Clewlow spent the end of the show in the crowd atop a wooden crate as fans held him up, with the band behind him pulling off Reso’s recent remix of bouncy single Anaesthetist. Enter Shikari cause carnage wherever they go, and Paaspop was no different. For anyone who enjoyed the new remixes which Shikari debuted during their set, the We Are Electric stage proved a perfect follow-up for the rest of the evening. Modestep, Noisia and Pendulum all appeared across the evening, creating a Drum and Bass wet dream for many. Sun-kissed metalheads Deafheaven spent an hour hypnotizing the Jack Daniel’s Stage as they toured Europe in support of new album New Bermuda. The record utilizes chaotic shoegaze-meets-metal, with frontman George Clarke’s deathly howls echoing through the room like a creepy spiritualist ritual. The Prodigy closed out the day in front of an absolutely packed Apollo tent, with MC Maxim having returned to the stage following a brief stint in hospital. Last year’s The Day is My Enemy was the focus of the set, its tracks sprawling in and amongst classic hits Smack My Bitch Up and Firestarter. The Prodigy may be well into their career already, but they still have a constant stream of surprises up their sleeve which they could unleash on a crowd at any given time. If anything, their set at Paaspop proved that they’ve definitely still got it.

The third and final day of Paaspop concludes with performances from Refused, Hollywood Undead and Underworld.