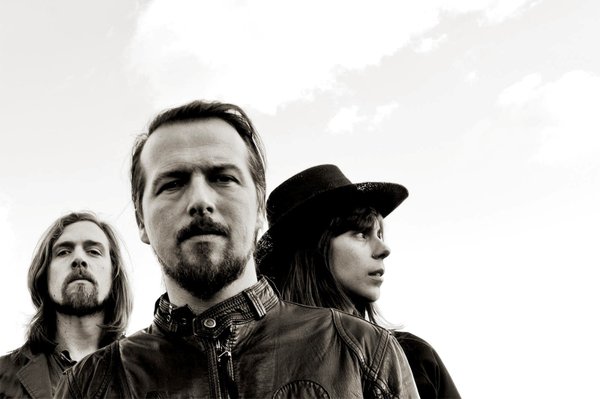 2016 is a big year for Dutch outfit Drive Like Maria. In and amongst a whole load of touring, the trio will be releasing not one, not two, but three separate EPs. Put together, all three sets of music are supposed to combine and form one coherent album, with the first set, Creator, out this coming Friday (15 April).

Creator, which subsequently precedes some of the band’s biggest shows yet, runs for twenty minutes and opens on Nighthawk’s darker, eerie guitar lines. “It’s time to let go” sings frontman Bjorn Awouters alongside this, with the track slowly building up in lyrical and musical intensity. The lilting guitars suddenly start to carry some more weight, before everything dies out and returns in the form of in-your-face riffs and pulsating rhythms. “I think we need to talk” continues Awouters as his band, Nitzan Hoffman and Bram van den Berg, accompany him. The rest of the track is a stop-start affair which eventually climaxes in a closing section that bears resemblance to Queens of the Stone Age’s most powerful desert rock passages. The fuzz reigns supreme in the end, being one of the few constant occurrences across the EP. Keeps Me Going makes use of a pulsating drum beat and light guitar opening, before the verse sees Awouters gritty vocal underpinned by occasional guitar stabs and progressive basslines. The chorus leans heavily towards anthemic proportions, lending itself to bigger venues than the ones Awouters and co. are about to (hopefully) sell out.

Penultimate track Sonny sees the instruments come together one at a time, with Awouters urging everyone to “hurry” as the “storm is coming”. It’s a slow burning rocker, once again sounding akin to Queens of the Stone Age’s desert rock heights. If Josh Homme was aware of Drive Like Maria, he would probably invite them on tour immediately. Or not, because a band like Drive Like Maria might not even need to rely on big stars in the future. They’re going to be one of them. EP finale Tiny Terror is a good example of this, spanning seven minutes in length as it goes from grandiose strength to strength. “Melancholy rides a pony up and down the boulevard” sings Awouter during the first part of the track, one which flitters between straight-up alt and powerful stadium rock. As the track comes to a huge and victorious ending, it’s becoming very clear that Drive Like Maria have way more to offer where this comes from. Creator’s follow-up, Preserver, will be released in September before the final instalment, Creator Preserver Destroyer, will come out in January 2017 as a full album. It’s an ambitious and time-consuming project, but Drive Like Maria know exactly what they’re doing. And boy do they do it well.

Creator will come out on Friday (15 April) via Caroline Benelux. Listen to Nighthawk below.