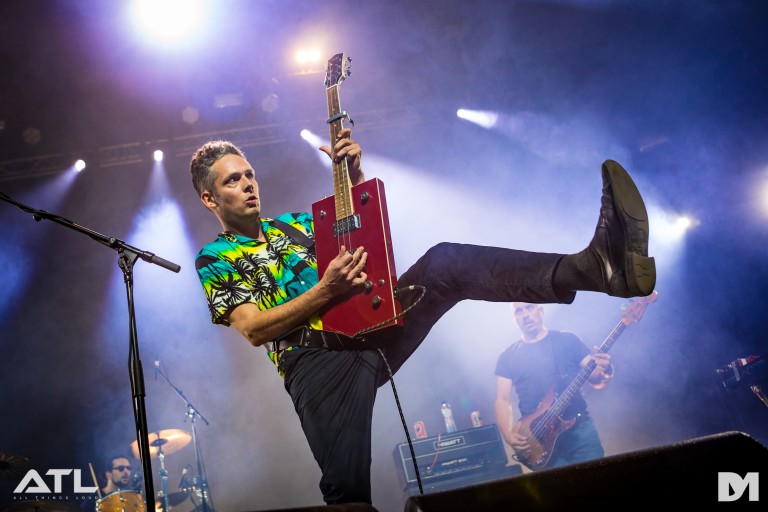 January has arrived, which means that the countdown to Eurosonic Noorderslag can well and truly begin. With seventeen days to go until Groningen plays host to some 40,000 visitors and 5,000 European industry executives, we’re taking a look at some of the less obvious artists who are worth your time later this month.

Limburg’s finest, Afterpartees, have been away for a while. Debut album Glitter Lizard came out back in 2015 and saw Niek Nellen and co. get quite far as they kickstarted the Dutch garage rock revival. Now, nearly three years later, they’re back and ready to conquer once more on new studio album Life is Easy. The record takes their familiar garage rock vibe out for a ride once more, however this time round there’s an added gloss and sheen which has somewhat replaced their initial rawness. Live, they’ll be preparing to tear the house down in Groningen, something which only they know how to do best. As Dutch bands go, you really cannot go wrong with a hefty dose of Afterpartees, so make sure you don’t miss out. Friday, Lola, 23:00

Now, you’ve probably heard of Alice Merton. Or at least her smash hit, No Roots. Having racked up more than 50 million streams on Spotify alone (plus 47 million video views), it’s safe to say that the English/Canadian vocalist is well on the way up. Her groove-laden mix of indie pop and funk is complemented by her sickly sweet voice in a way only she knows how. There won’t be much stopping Merton once she hits the stage in Groningen later this month, so it’s best time to prepare yourself for a year in which we’ll undoubtedly hear a lot from her and her extremely soulful voice. Thursday, Huize Maas, 20:45

Dutch fuzz punkers Charlie & the Lesbians are one of the many local acts set to shine during Eurosonic, with this Eindhoven outfit forming part of the renowned Rock ‘n’ Roll Highschool. Expect a set filled with gritty riffs, gnarly vocals and brutal rhythms, because that’s exactly what these guys do best. And the best part? You can catch them not once, but twice on the final day of Eurosonic Noorderslag! Saturday, Vera, time TBA & Saturday, De Oosterpoort, 02:30

Rotterdam’s finest, Iguana Death Cult, have quite the live repertoire under their belt. During an extremely successful 2017, in which they released the acclaimed The First Stirrings of Hideous Insect Life, Jeroen Reek and co. appeared on the huge stages of Lowlands and Best Kept Secret, having supported Australian behemoths King Gizzard & the Lizard Wizard a year prior. Now, they’re ready to grab 2018 by the horns and kick it off in style with not one, not two, but three sets at Eurosonic Noorderslag. Friday, Lola, 00:00 / Saturday, Plato, 17:00 / Saturday, De Oosterpoort, 01:45

“Hypnotic analog dance music” are the four words which prolific musician Nic Mauskovic has used to describe his latest project, The Mauskovic Dance Band. And he’s not wrong, because TMDB is by far one of his most energetic and perkiest projects to date alongisde the Latin-tinged Bruxas, Turkish collective Altin Gün and his role in Jacco Gardner’s live band. Allow Mauskovic and his dance band to take you on an edibles-worthy journey as they transform Groningen into a psychedelic, afro-Caribbean paradise. Saturday, De Oosterpoort, 01:45

Now, Millionaire aren’t exactly the first band you’d think of when it comes to the next big thing. That’s because the Belgian rockers have been around quite some time, having first burst onto the alt rock scene back in 2000. They’d been active up until 2008, having worked with Queens of the Stone Age’s Josh Homme on the grisly Paradisiac. Now, they’re back with new album Sciencing in tow to come and teach Groningen a lesson in grunge-laden stoner rock. Friday, ESNS Play, 22:40

Swedish duo Pale Honey are one of the most promising Scandinavian acts set to take to the stage in Groningen this month, with their infectious riffs and catchy vocals already getting tongues wagging back home in Gothenburg. Their cover of ABBA’s classic Lay All Your Love On Me is one of their most intriguing works, seeing them transform the disco classic into a brooding, downbeat alt rock cut. Sophomore album Devotion came out last year, with 2018 set to be the year that Pale Honey well and truly conquer. First stop: Groningen. Wednesday, Huize Maas, 21:30

Belgian singer-songwriter Tamino has already made quit a name for himself in his home nation, with his sultry vocals and sole acoustic accompaniment already making their way across Belgian airwaves for the duration of 2017. A set at Rock Werchter firmly cemented his status as genuine up-and-comer, and now he’s making the trip over to Groningen to achieve similar successes on Dutch soil. Allow Tamino to draw you in with his hypnotic voice, because once he’s got the listener in the palms of his hands he won’t let go. Thursday, Stadsschouwburg, 21:25

Multi-instrumentalist Will Heard has been tipped as one of Eurosonic 2018’s big stars, and a quick listen to his Spotify Top 5 will prove exactly why that’s the case. In a market where singer-songwriters rule the roost, it can often be a tough task to stand out; Heard, though, looks like he’s totally ready to swoop in and make his way to the top with effortless ease. Tours and collaborations with Rudimental and Anne-Marie already form out a part of his impressive CV, although the real proof of his worth will come when he hits Groningen in a couple of weeks. Friday, Groninger Forum, 23:00

Closing out our third set of Eurosonic recommendations is indie punk starlet Yungblud, whose riotous live shows and unmatched energy have already seen him hailed as one of this year’s ones to watch. You don’t need to look far to find out why, because the mere three tracks on his Spotify page demonstrate enough potential to pave the way for a lengthy career. Think Jamie T and Arctic Monkey’s northern swagger mixed in with a hint of RAT BOY’s attitude, but then on steroids. Friday, Huize Maas, 22:15

Eurosonic Noorderslag 2018 takes place from 17-20 January in and around the Dutch city of Groningen. Head here for more information, and listen to our playlist below.