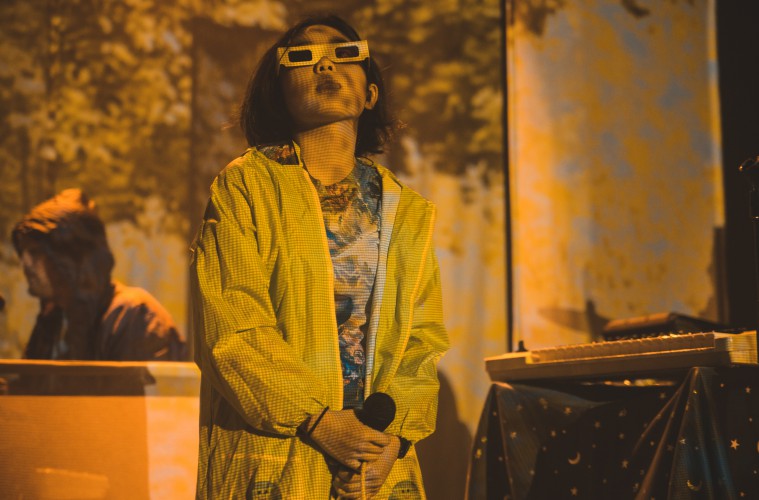 Eurosonic’s final day came to a close last night by means of snowy conditions, however this didn’t do much to deter the northern hotspot of Groningen in achieving its aim of providing revellers with the best new music there is to savour in this day and age. On a night where some of the year’s ‘bigger’ names looked set to steal the show, it turned out to be the unlikeliest performances which made for the best responses.

Electro pop collective Superorganism kicked off the evening at the Machinefabriek, with the period before their set spawning a queue which stretched all around the block and back into the centre. And quite rightly so, because there is something extremely special about this unique septet. Frontwoman Orono’s sickly sweet vocals, accompanied by three backing vocals and a tight live band, spearheaded the night alongside her dry wit and humour. Superorganism are the kind of band who tick all the right boxes, whether it be musically or visually. Set opener It’s All Good kicked off proceedings in a captivating manner, with the set’s peak coming in the form of unreleased track SPRORGNSM, taken from their upcoming self-titled debut. “I wanna be a superorganism” repeat the band’s trio of backing vocalists, with wispy beats and a lilting guitar line giving the track that little bit extra. Set closer Something For Your M.I.N.D., the track which gifted them with their breakthrough last year, served as a memorable moment in a set full of quirky surprises. If this isn’t Superorganism’s year, then something is definitely wrong. One bad who sadly didn’t live up to the hype, though, were Manchester’s Pale Waves. Their melancholic brand of indie pop (essentially an offshoot of The 1975) did little to make waves in the cold and murky surroundings of ESNS Play, with frontwoman Heather Baron-Gracie and her band looking much like they’d rather be somewhere else; which is a shame, because the potential is there – it just hasn’t been found yet. Austrian trio NIHILS didn’t find themselves being one of the week’s hottest tips, but based on their enigmatic performance and large Mutua Fides crowd, you could assume that they just laid down the building blocks for a big career. Gloomy synth lines and pulsating percussive stabs found themselves littered throughout the set, strategically placed in and amongst Ramon Riezouw’s vocals. It thus shouldn’t come as a surprise that their remix of own track Help Our Souls has been streamed tens of millions of times. Still, though, it didn’t seem like a big enough milestone for the Mutua Fides stage host to mispronounce the track name in hilarious fashion. Over in the Vera at the supposed graveyard shift time of 1:15am, Cardiff grime/nu-metallers Astroid Boys performed their first show of the year in exquisite fashion, giving the full room something to mosh to as they demonstrated exactly why it’s worth getting even more excited about grime and its respective offshoots in 2018. Set highlights Foreigners and Dusted seemed to do the job for the quintet, so much so that the line to get into the legendary club stretched out all the way down the street. Good job for a band whose appearances on Dutch soil have been few and far between. Eurosonic 2018 has now ended, but tonight Noorderslag takes over in the city’s Oosterpoort from 8pm onwards.