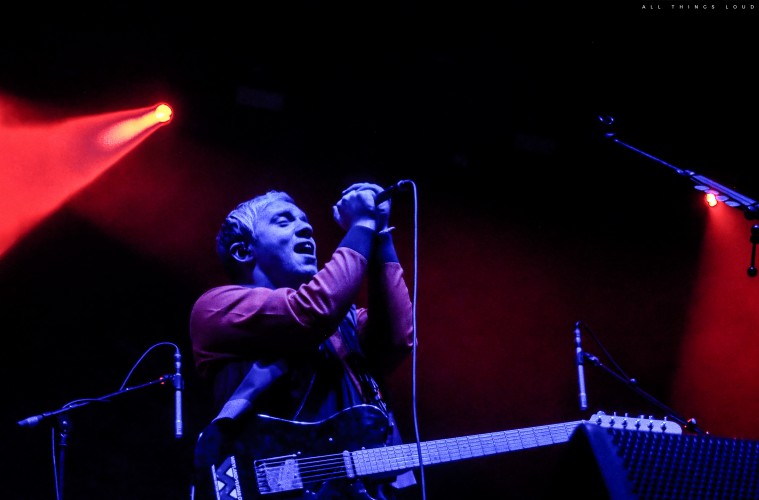 Everything Everything: “The world feels absurd at the moment”

It’s been a busy twelve months for Everything Everything. As we sit down to chat with frontman Jonathan Higgs and drummer Michael Spearman, the band are just gearing up to play a huge show supporting Foals at Amsterdam’s Heineken Music Hall. Having released new album Get to Heaven the last year, Higgs and Spearman talked of the record’s (supposed) lyrical chronology, the importance of visuals, as well as various on-tour food essentials. “Point it right at my dick” jokes Higgs as soon as he makes eye contact with our visual recording device, swiftly changing tack and talking of the so-called lyrical chronology present across Get to Heaven’s tracks. It’s a claim which has been made by many Everything Everything fans, and has thus subsequently become an intriguing point of inquiry. Drummer Spearman isn’t so sure about the chronology present, though, claiming that anyone who has found some sort of order is “mistaken”. Higgs partly counters this claim, stating that he feels some chronology is present. “I do think there is a conceptual order there in how it’s about someone who’s become disenchanted and draws some kind of ideology which leads them to committing horrible crimes before doubting it. That’s basically the story of the album” explains the frontman, further adding that this is as specific as the concept gets, save for some particular events. In a review which preceded Get to Heaven’s release, BBC journalist Mark Savage described the album as being “full of Ebola, missing airplanes and the rise of UKIP”. However, Higgs claims that this wasn’t specifically intentional and that the band weren’t predominantly planning on writing songs about these topics from the off. “These things did make me feel certain emotions, but I didn’t write songs about specific diseases. It’s more about feelings and moods, because I don’t really know what I’d say about Ebola” he jokes as the pair both laugh.

We eventually narrow our focus on Get to Heaven to two tracks in particular – the summery Spring / Sun / Winter / Dread and the poppy Regret. The former came about from a little “riff thing” thought up by guitarist Alex Robertshaw, with Spearman explaining how the song was changed around quite a lot before Higgs got his melody-ready hands all over it. “We gave the track to Jonathan and he put a melody over it. It’s quite an interesting way to work, really. We just really liked the first thing we did with it” he added, before asking whether or not Higgs had included the track’s repetitive sequences. “Yeah, it’s just the chorus again and again” answered Higgs, before discussing the lyrics. “Most of the lyrics were written all at once, which is kind of rare. I wrote about some old-fashioned insults, such as being a baboon” he began. Higgs felt that using baboon to insult someone was “very modern sounding”, declaring that it shows how “people haven’t really changed throughout time”. Comparing its past use to slagging off his friends in 2016, Higgs continues to explain how he came upon the idea to refer to people as barbarians. His backstory on the word barbarian also included an explanation about its birth, which he claims came about from the way in which foreigners were always believed to be saying “bur bur bur bur bur”. This supposedly became barbarians, and it was even almost selected as an album name over Get to Heaven. Regret, on the other hand, was the result of a “silly little thing” Higgs used to sing at home. “My girlfriend would sing this really stupid, but catchy, tune. One day I just went into our studio and recorded it” he explained. He recorded the vocals almost entirely in a traditional, before worrying that the rest of the band would “come in and fuck this up”. However, they didn’t. Instead, they all agreed that it just “worked” and only tried replacing a few things here and there. Although the band were sure it was a great song for them, they were initially wary of the track being “too traditional” for their liking. They don’t seem to mind, though, as the track has “done great things” for them. When it comes to the approach which the band took on Get to Heaven, Higgs claims that guitarist Robertshaw wrote a bunch more on this record as opposed to previous ones. Allowing him to do so “added so much more flavour to proceedings”, adding that they threw caution to the wind in terms of being able to actually perform Get to Heaven’s songs live. “Should we keep it live or not?” was one question the band asked themselves often on 2013’s Arc, with this decision being left until later in the process this time round. Musically, Spearman claims that the band had a lot more confidence in themselves on this record, as opposed to the more nervous times they would’ve encountered for previous releases. Still, he adds, there was nothing “majorly different” about the way in which they approached writing and recording Get to Heaven. “We didn’t hold back as much, but we are getting better at what we already do” declared Higgs confidently, and quite rightly so. Get to Heaven is the band’s finest record to date, and it’s also been their most successful. Spearman concludes that the band took more risks this time round, too. “Some of the songs hadn’t ever been played before we recorded them” he explains, giving off the impression that, in some circumstances, it was all very touch-and-go for the band when they were in the studio. Of course, the visual side is just as important for a band like Everything Everything. Onstage, they all wear matching red boiler suits, whereas their artwork is either extremely thought provoking, or brash and in-your-face. The ideas for their ‘art’ tend to come from general themes: lyrics, connections and thoughts. The album artwork for Get to Heaven features a cartoon image of Captain Scott dying in the arctic, his facial features over-exaggerated and more colourful than such subject matter would have you imagine. “For this record, we wanted something which was comically horrific, and had some elements of religion and power” explained Higgs, with Spearman adding that a BBC documentary he’d watched about faith healers had influenced him. “There’s a lot on the record about how people are going to desperate measures in desperate times” he says, before referring to Adolf Hitler as an example. “Back then, people were like “oh yeah, we need this guy because we’ve got this problem”, and then all of a sudden these people become radicalized which is a bit scary. The world feels absurd at the moment”. Higgs jumped in to add some musings about the concept of Martyrdom being involved in Hitler’s rise, adding that these kinds of things were important in forming a visually appealing artistic core on the record. The respective music videos were in turn less intense and more about the band “just having fun”. Away from the studio, the band have just wrapped up a lengthy tour with Oxfordshire quintet Foals. This is just a small part of their Get to Heaven album campaign, even if it does look set to reach a shedload of new fans across mainland Europe. “We just love playing to new people, and this tour has been great for that” explains Higgs, adding that they have a “special relationship” with their mates in Foals. “We’re in a similar boat to them” he says, before Spearman sarcastically interjects that they’re “in a little dinghy next to Foals’ warship”. Both bands are often talked about in similar circles, even though they’re each at a point where they’ve strayed away from their basic sound and both gone in separate sonic directions. “We’re basically trying to not be a shit band, even though we’ve been forgetting that recently” laughs Higgs. The duo both agree that their show at Glastonbury was their favourite show of the album campaign so far, particularly due to the fact that the record “had just come out and people were already singing along to it”. “Glastonbury is a special, and emotional, place” concludes Spearman, before Higgs jokes that the emotional part is due to everyone being tired and “getting fucked up on the first day”. As we reach the end of our discussion, Higgs and Spearman take out time to answer questions which were submitted by their fans. The first question concerns their favourite food essentials on tour, to which Higgs only has two words: “Namaste Nepal”. Although this restaurant is in Manchester, Higgs backs up his choice by claiming that they “try to stay away from Italy and go to Japan or China”. “Italy is too easy and fattening” he continues, laughingly adding that it “makes you feel like shit”. The usual KFC’s and Burger King’s receive special mentions, even if the band do try and resist the service station temptations when on the road. The second question asks which countries, in a good way, have the weirdest crowds. Higgs’ first answer is China (“they don’t know what to do with a band at all”), with Spearman adding that crowds there (and in Japan) are very respectful. “Between songs they’ll clap a little bit, and then there’s some silence” he explains as he impersonates one such fan. Higgs adds that “the respect for disrespectful rock ‘n roll is weird”, claiming that there’s a real clash of mentalities. “You’re supposed to shout at the band and tell them they’re shit” jokes the frontman. The final question which was selected for submission concerned the band’s favourite moment(s) while writing Get to Heaven. The pair both unanimously agree that “finishing it was great”, with Higgs adding that the transformation album opener To the Blade made also being a standout moment. The original demo had lilting arpeggio’s, which were eventually swapped for low guitars (“I was distraught”, claimed Higgs) and a lack of harmony. Now, To the Blade is one song which the band are all extremely proud of, just like the rest of Get to Heaven. On this record, the band proved yet again that they are one of the quirkiest and most intriguing groups of our generation. Their wide scope of styles and unique visual understanding have set them apart in a world where standing out has become increasingly tougher. Nobody knows yet what’s next for the band, but it’s undoubtedly going to be bigger and better than anything they’ve done before.

Watch the video for Spring / Sun / Winter / Dread below.