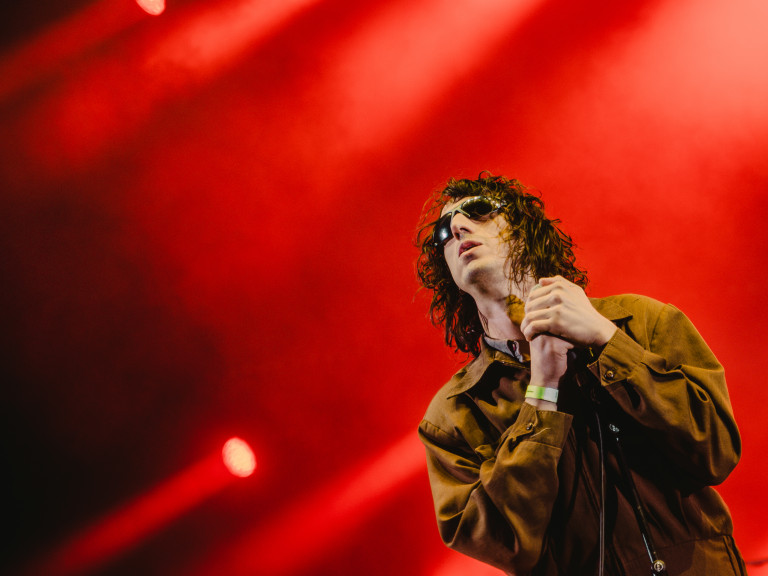 It’s not always easy being the main man in one of Britain’s most raucous and chaotic bands. Lias Saoudi has been through hell and back at the forefront of London’s Fat White Family, with new album Serf’s Up (due Friday) serving as somewhat of a full circle record for a band whose on and offstage reputation used to put even the gnarliest to shame. Not anymore though, because Serf’s Up signals a change in attitude from Saoudi and co., and it’s a compelling one to say the least. Jack Parker caught up with Saoudi over the phone.

Hey Lias. How are you doing?
Yeah, yeah. Good, good.

It’s been three years since Songs For Our Mothers. What’s new?
Pfoe, that’s a big question there. What’s new? Well, we went up north to suffer penance for our sins. We moved to Sheffield for a couple of years to reconfigure spiritually, psychically, financially and chemically. We’d just had lots of time to realign our ideas about ourselves and think about what we want. We wanted to absorb the people up there, read books and step away from the cataclysm of the six years that came before that.

Why Sheffield?
I’d been up there with The Moonlandingz, and I’d always been part of a tight knit musical community there. We needed to get away from London! We’d gotten his new deal from Domino, but it wasn’t as though they were going to pour money down the drain for us. We fired Saul (Adamczewski) at the time and so we had to reconfigure. Saul was our musical director for the most part. A house in Sheffield also costs the same as a room in Brixton, and so we lived in a post-industrial part of town.

Serf’s Up is the new album, and it’s a good one. It’s an ambitious record to say the least. Did you go into sessions with a vision?
I think it was as a reason to what we did before. We wanted to do something that felt more, you know, pop? We all love listening to pop music but we never felt bold enough to approach it like that, in such a different direction. It was basically just a long period of experimentation and us throwing ideas at the wall to see what would stick. Cocaine and heroin were both removed from the picture, and replaced with acid and ketamine to enter a more visionary state. The big idea was to do something more rooted in pop.

On previous albums of yours looked at political leaders and cult figures in detail. Goebbels, Harold Shipman and Ike Turner to name just three. Serf’s Up doesn’t really take this approach, at least not explicitly. Is there a reason behind this?
They’re still there, but indeed not explicitly. Kim Jong Un’s fascination for his weaponry is on the song Kim’s Sunsets, whilst I Believe In Something Better is about Ted Kaczynski as if he were some modern day green environmentalist. There are still similar concepts at work, but it’s also more personal. It’s always been about personal stuff in a way, but now I’m trying to shed my layers of sarcasm and irony as I become less anxious.

You mentioned Saul being fired earlier. What’s the deal with him now?
So Saul came back to the band after nine months. We did the Insecure Men record together, and I wrote most of the lyrics on that. I flew out to Sean Lennon’s house to make that album with him. When there we talked about him coming back and doing a Fat White Family thing, but that took a while to manifest. Without Saul we tried to fill that gap, and it was a challenge. Nathan (Saudi) and I started writing more melodies, so we had the best of both worlds in a way. We had to get away from that dominating personality; Saul was quite dictatorial up until that point. He had to work around our ideas when he came back, and then he discovered this pragmatism about himself which he didn’t know he had within his autistic sensibilities.

The record is far more polished and groove-based than before, but it still retains that typical Fat White Family sound without compromising your ability to progress. That’s bold, no?
You set yourself up a challenge every time you make a work of art. When we started out as a band we only had ourselves to amuse, which is why we wrote about bombing theme parks and pedophilia. Then people started listening to us, so we had to do something about that. That’s when we wrote stuff about Goebbels’ love letters, because that was still quite comical to us. But what’s the provocative thing to do now? Making an articulate body of pop work, it seemed. We’ve done the spitting in the face of decency a lot now, so we wanted to do something palatable. It didn’t feel like a big, bold move to us; it felt more as though it was our duty to explore new terrain and move forward.

Your live show in the early days was definitely far from ’normal’, but in recent years it has become less chaotic. Rock en Seine last summer, for example, was slick. What did your close friends think of some of your weirder onstage antics?
I think people thought it was quite funny, a bit of a joke maybe. We certainly didn’t take it that seriously. It was like a freakshow, y’know? We started in our living room in Peckham, myself, Saul and Nathan. We’d write folk and country songs and then we used to play them at an acoustic night up the road. We’d go there every week with these new little songs, and we didn’t think much else of it. It would keep growing and growing, and it’d become more chaotic with members joining. Eventually we couldn’t do it anymore as we got kicked out of the acoustic club. It was a very organic, DIY approach to doing things. We didn’t think of it as a career or ambition, it was just for our own amusement. The people around us were part of that. They would take pictures, put on live nights and lend us a studio here and there. It was a community thing, and moving to Sheffield was about getting back to that with none of the bullshit and hard drugs. Just music that we want to make, and forgetting about all the noise, hype and crap that had soured it for us.

So does that hedonistic lifestyle still seep into the world of the Fat White Family?
I mean, I’ve personally slowed down. I’m 33 now, and when I started I was in my mid 20s. My life would be unliveable otherwise. I kind of enjoy my life, and I feel incredibly grateful for the opportunities I’ve been given. To be able to work on these big projects and have people fund that, it’s a fucking blessing. It would be indulgent and brattish to continue using hard drugs like I used to. When the last album campaign ended I thought that we’d put way too much work into it. My attention towards hedonism has shifted a bit. I can’t speak for everyone, though; there’s always going to be a heroin problem in this band. There’s always going to be someone who is battling that, but it’s about how you manage the situation and the maturity with which you approach it. I’ve had a proper long time to get clean now. I used do a lot of coke, speed and MDMA, a lot of uppers. I was always coming up or going down. I even go to the fucking gym now! I just want to cut the bullshit and make it all about the music. Have those difficult conversations, regardless of if they’re right or wrong. I want to offer myself up for humiliation if need be, but still keep it about the music. We’ve managed to pull through an abyss of self-destruction, pain and paranoia. I want to make the most out of it, and show gratitude to all of these opportunities I’ve been given. Serf’s Up is due 19 April via Domino.