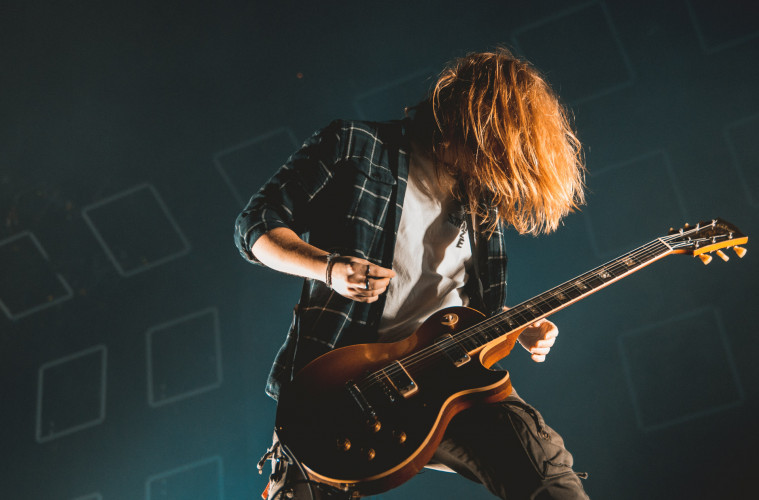 My Favourite Album of the Decade: Nothing But Thieves’ Joe Langridge-Brown

Here at All Things Loud, we’ve spent the last few weeks reflecting on our favourite music this decade. Alongside that, we’ve also asked a number of artists to tell us all about their favourite album of the 2010s. Today, Nothing But Thieves guitarist Joe Langridge-Brown introduces us to his ultimate #1: Get to Heaven by Everything Everything.

“Find me another album that can juggle subject matters such as extreme violence, the rise of ISIS and reptile conspiracy theories, marry them to a frenzied alternative pop album AND manage to make it sound exquisitely rich and exciting. You’d struggle. My favourite album of the decade is Everything Everything’s Get To Heaven.

Everything Everything were label mates with us at the time of its release. I use the term ‘label mates’ loosely, as it was more a case of our band fanboying over theirs, admiring from afar both their work and the god AWFUL stage outfits they were employing at the time. Eventually we managed to persuade Johnathon Higgs to come on stage with us at a show in Manchester, which we’ll always be grateful for.

Get To Heaven is an album which I can revisit again and again. And I do. It manages to transcend listening habits – the holy grail of being an album that you can sit with, consider and absorb but also something to put on when having a few beers and fancy a drunk dance. The song No Reptiles, in my opinion, is a modern day classic. Briefly breaking away from the agitated chaos that occupies most of the album, its simplicity and unusual build towards its finale is mesmerising.

The musicianship on Get to Heaven is noticeably impressive. Everything Everything manage to create layers of textured synths whilst falling short of congested nonsense. The album also has choruses – a skill which I think is surprisingly underrated. Finally, and in the context of the decade, it’s not a hugely well known album, which makes me look as if I know what I’m talking about. So cheers, boys.

Honourable mentions go to The War On Drugs’ A Deeper Understanding and Arctic Monkeys’ AM.”

Listen to Get to Heaven below.