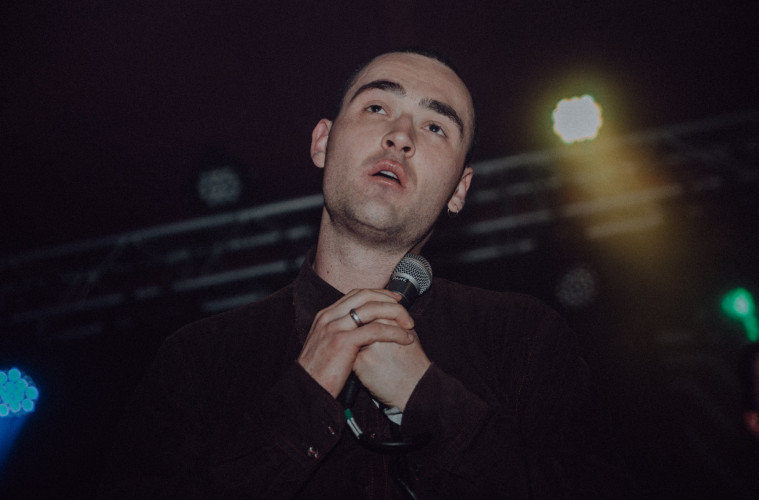 When I Have Fears: In Conversation With The Murder Capital

What does it take for a post-punk band to stand out in a year where there’s a new hype act on every street corner? For every politically-charged IDLES or poetic Fontaines DC, there’s at least another ten bands waiting to pounce who’d have trouble differentiating themselves from the crowd. Dubliners The Murder Capital don’t need to worry about this luckily, blending frenetic rhythms and riffs with overtly emotional lyrics. They’re a band for those dealing with the tougher aspects of human emotion, and tomorrow they put out debut album When I Have Fears. Jack Parker caught up with guitarist Cathal Roper to discuss the album, their hype factor and standing out in a world where everyone wants to stand out.

Hey Cathal. How does it feel to be in one of the most exciting punk bands of 2019?
At the moment it doesn’t feel like that. We just like the way we’re doing all of our gigging, releasing songs and waiting to see what happens when the album comes out. I don’t feel the hype too much, even though we hear a lot of it coming from other people.

You kickstarted your year with a blistering show at Eurosonic. Outline for me how the seven months have been since then.
Since that show in Groningen we’ve finished the album, and we’ve just been doing loads of shows and planning the release. It’s been a big learning curve for us, as there’s a lot of stuff on your first release that you learn by gigging away and trying to get your band out there as much as possible. It’s been a big, crazy seven months.

At what point did you all look at one another while recording and think, “Yeah, this is done”?
After we recorded everything we needed we had these two intense weeks of mixing and listening. It was a long few weeks of listening to it over and over before getting new mixes back. We had to figure out where the compromise between the five us were. We still wanted to have that arc of the album with a lot of attention to detail.

Was it tough finding that compromise?
It was difficult, because each of us had to be happy with just working towards that point. It’s the same as with our writing, we don’t stop until we’re 100% satisfied.

Of course. It took a while for you to actually bring anything out. Did you leave it long intentionally?
Not as intentional as everyone thinks we did, no. We were just of the mindset that the next thing we released had to be of the highest quality. We had so many songs at that time which just weren’t quite there. We put the video [SOMA Sessions] up in April, but there wasn’t anything else we were fully happy with until June. It took us a while to write stuff we were really sure of wanting to record while we became comfortable with writing. Some band members changed too, and so that played quite a big part.

So why Feeling Fades first?
I think that was just the song we had at the time that we’d wanted to release the most. It was something we were very, very proud of so we were more than happy to release it. We got the chance to record with Flood (The Killers, U2, Foals) and so we asked ourselves what we could do with him when we took that opportunity. We knew straight away it would be Feeling Fades, and that that song was going to be grand. At the time we only had four songs for the record, so it wasn’t a hard decision.

What did Flood bring to the table as producer?
He really wanted to work with us! And we were, of course, excited to work with him. He would let you be creative and let you go with it; if you found things difficult or wanted to change stuff he would be empathetic. He understood that there were different personalities in the band, and he’d help us work together in the best and most forward way. He understands how people work, which really helped us. Maybe it’s because he’s so old. It was a real box-tick kind of thing, getting to work with Flood. It was almost like there was a fourth wall, that you had to check yourself, look at the camera and say “holy fuck”. It didn’t feel like it at the time, but looking back it does now. Now we look back and see which records he’s done in the past, and it’s crazy. He was objective and helped us make the album as perfectly as we could.

The entire post-punk scene is very, very saturated at the moment. What would you say The Murder Capital thus offers that separates you from the rest?
Um, that’s a good question. I would that these songs offer a more introspective look into where we’re at in our lives. IDLES, for example, are very political and they talk about instilling a sense of community. I hope we can instil that too by offering an insight into what people go through during their lives: grief and love. I don’t know, it’s weird to compare yourselves to other bands, because when we write a song we just hope it means something substantial to us. If other people connect to it too, then that’s just a beautiful thing. We’re not writing for anyone but ourselves, and if we’re not happy with a song then it isn’t going anywhere. We have to be happy with the five of us. I’m not saying that other bands don’t do that, but everything we give is exclusively what we’re very happy with ourselves. When I Have Fears comes out tomorrow (16 August).