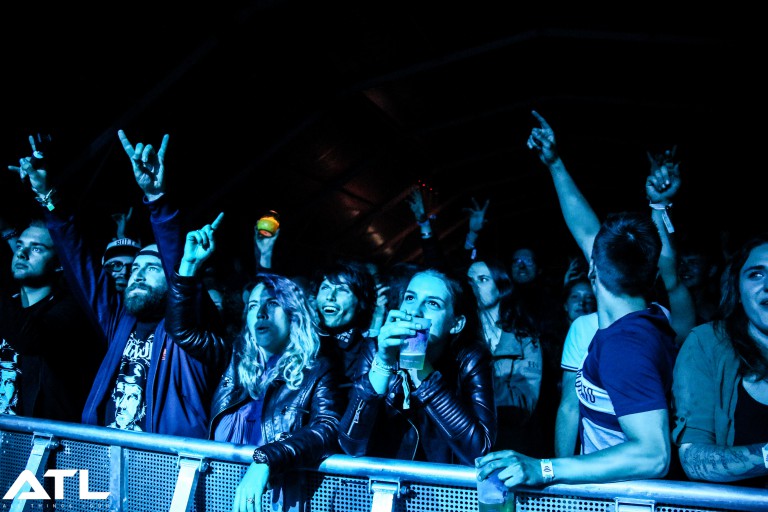 The third day of Best Kept Secret saw the weather take a positive turn: 20,000 festivalgoers were greeted by constant sun and blue skies, making the final festival day one to remember for all the right reasons. Aside from the controversial choice of headliner (Jamie XX), Best Kept Secret came to a close thanks to some of the weekend’s best new discoveries and returning heroes.

Texan post-rockers Explosions in the Sky opened the day, having specifically chosen to perform one of the earliest slots possible for a 75-minute long set on Stage Two. The instrumental collective specialize in the dramatic, eerie sounds which draw the listener in with so much subtlety that you eventually don’t realize which world you’re being sucked into. Popular track Disintegration Anxiety naturally featured, with the crowd (a full one, at that) absolutely in awe of the absolutely beautiful soundscape which echoed through the tent. You couldn’t picture a more hauntingly beautiful start to the day even if you tried. Over on Stage One, the tables were completely turned as London-based rockers VANT took to the stage to spread messages of societal downfall and hope. The Matty Vant-fronted quartet were (save for Vant himself) all dressed in matching binary outfits, spending 45 minutes absolutely tearing the stage apart with enough energy to last a lifetime. Vant dedicated early track Put Down Your Gun to victims of the tragic Orlando shooting, before later on in the set urging anyone with English friends or family to vote to remain in the EU. The music is simple, essentially mixing the best elements of Cage the Elephant’s rawness with The Kooks’ accessibility and a punky attitude. It may not be the most logical combination on paper, but it certainly works.

Back on Stage Two, the Ruban Nielson-fronted Unknown Mortal Orchestra took last year’s Multi-Love to Hilvarenbeek for a sprawling, 60-minute long set in front of a full tent. Set opener From the Sun, which is taken from Multi-Love’s predecessor II, instantly introduced elements of funk and soul as Nielson took to interjecting the set with multiple guitar solos. Percussionist Riley Geare stood out during the set with his precision-filled drumming, even silencing the tent as he pulled off a majestic drum solo early on. Set closer Can’t Keep Checking My Phone sent Nielson and his band off into a victorious daze, with the frontman very much aware of the fact that the band had absolutely mesmerized Stage Two. And quite rightly so, because rare breeds like Unknown Mortal Orchestra don’t come round very often. Half Moon Run followed over on Stage One, experiencing problems from the off as they were greeted with no power onstage. Co-frontmen Devon Portielje and Conner Molander performed the first track almost acapella in front of some 10,000 fans, before the power returned and the band resumed normal proceedings. 2015’s sophomore release Sun Leads Me On featured heavily, although cuts from 2012’s Dark Eyes still received the warmest welcome from the crowd, in particular popular track Full Circle. The set may have fallen just short of the mark, but Half Moon Run still managed to prove that their spontaneity knows no bounds.

The fact that all of the day’s best performances took place on Stages One and Two says a lot about the spread of diversity which Best Kept Secret managed to (subconsciously?) avoid, however it did mean that bands performing on both stages were met with packed out crowds due to the short walks from stage to stage. Brooklyn indie rockers Yeasayer had this to their advantage when they performed on Stage Two, spending an hour performing tracks from new album Amen & Goodbye as well as its three predecessors (Fragrant World, Odd Blood & All Hour Cymbals). The stage was adorned with light-up cardboard cut-outs of human beings, with guitarist Anand Wilder dressed in what seemed to be an outfit from Orange is the New Black. Although the stage show was captivating, it seemed slightly as if Yeasayer were going through the motions and working their way towards the end of the show. Which is a shame, because it could’ve potentially been spectacular. Back on Stage One, Band of Horses were greeted by quite a special guest during their emotive set. Radio station 3fm had gifted them with a huge plastic horse which was lifted through the crowd during third track Casual Party, with crowd members taking it in turns to sit on the horse and give security hell. The horse may have been a prominent gimmick (which the band loved), but it didn’t take away from the fact that the Seattle rockers pulled off one hell of a tearjerking performance. Early highlight Laredo made for a special moment in the set, with the whole show essentially being wildly unforgettable.

Where Band of Horses managed to send away fans with a huge grin, Icelandic performer Asgeir managed to do something completely different: bore the whole of Stage Two. Although he’s musically very much on form (his live band equally so), his stage presence is practically invisible. At times, it seemed as though Asgeir would’ve rather been elsewhere, with standout track King and Cross even sounding duller live than it does on record. Over on Stage One, Two Door Cinema Club proved themselves to be a band worthy of headlining the whole festival as they previewed the October-bound Gameshow. Lead single Are We Ready? (Wreck) featured alongside the album’s title track, with the rest of the show a mere greatest hits collection. Popular cuts Undercover Martyn and This is the Life featured early on, before Something Good Can Work and set closer What You Know further emphasized TDCC’s ability to pull out banger after banger. Had Jamie XX not been a suitable headliner, then Two Door Cinema Club would’ve been a perfect replacement. In fact, for most people they actually were. Best Kept Secret 2018 headliners, anyone?

Alongside Best Kept Secret’s five stages, food stalls and market lies an almost hidden stage in the depths of the forest, which for the first time ever served as a location for 3voor12’s annual live sessions. Nestled just behind Stage Two, the Secret Garden featured 15-minute sets throughout the weekend from the likes of Weaves, Ezra Furman and Sunday evening’s main attraction: the Fat White Family. Kicking off twenty minutes late, four of the band’s six members performed three tracks for a sizeable crowd. Older tracks Touch the Leather and Is It Raining In Your Mouth? both received a stripped back treatment, with frontman Lias Saudi dressed as a soviet minister drinking what looked like rum. Final track Satisfied saw the four members loosen up a bit more, before leaving the stage altogether and preparing for a late set on Stage Five which almost saw Saudi destroy the stage. Taking to the stage as a six-piece, the Fat Whites drew heavily from new album Songs For Our Mothers as Saudi rolled around on the floor and covered his back in mud whilst kicking monitors. As per usual with a Fat White Family show, the band didn’t quite seem to be all there; however, that’s the charm which this band offers. None of the members are relatively normal onstage, making it all the more exciting to witness their live show’s unpredictability.

Back on Stage Two, spiritual headliners Wilco performed an extremely solid and captivating set, one which could’ve been twice as long had the band been able to play every single track on their setlist. The legendary sextet performed 20 tracks in the end, opening on the upbeat More… and reaching its finale (The Late Greats) via the likes of The Joke Explained’s catchy vibes, Heavy Metal Drummer’s intertwining instrumentation and Impossible Germany’s twinkling atmosphere. Just like Two Door Cinema Club, Wilco would have also been perfectly capable of headlining Best Kept Secret’s main stage. However, Stage Two seemed the perfect fit for a group of legends who have never looked more comfortable than they do today. On the complete other spectrum of comfort was Jamie XX, who had the extremely hard task of headlining Stage One. A DJ headlining Best Kept Secret has been a controversial topic of discussion for quite some time now, but did Jamie XX actually do his slot justice? To sum it up briefly: not really. Pulling a crowd half as large as Editors’ headline set a day earlier, Jamie XX seemed to be lost in his own little world onstage as he flittered between different vinyl tracks which ranged from 70s disco all the way through to 90s dub and his popular Florence & the Machine remix. If you’d have put Jamie XX on Stage Two and let him headline there, then there would be no problem. His set may have even been much better had he performed indoors, however this wasn’t the case and it ensured that Best Kept Secret headed for a slightly weaker finish than hoped. It was definitely a risk worth taking, however the low turnout and ultimately disappointing atmosphere may have taught the organizers a lesson for 2017. Via a disappointing set from Yelawolf, Best Kept Secret finally came to an end following three days of spectacular highs (Editors, Rat Boy, Wilco), brilliant new discoveries (Weaves, Beach Slang, Kid Wave) and very few lows (Jamie XX, Asgeir, Beck). There’s currently no indication as to what we can expect from the festival next year, but it seems as though the weekender (which takes place from 16-18 June 2017) can only get bigger from here on out.