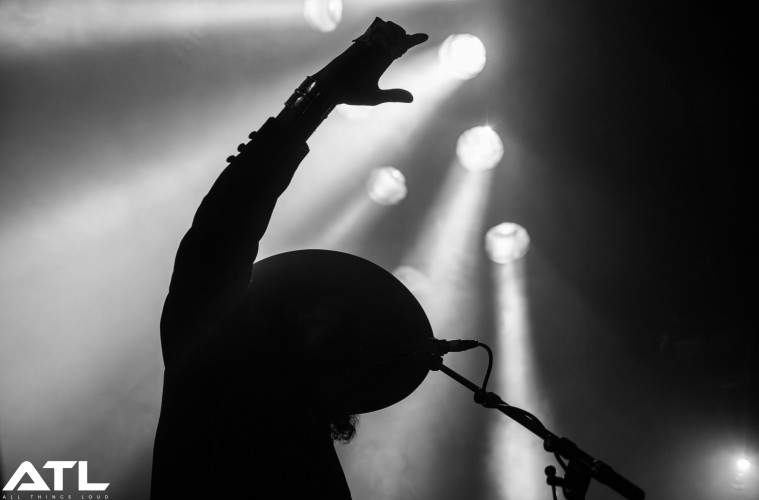 Throughout the last year, Den Haag’s Crossing Border Festival has undergone a relatively sudden creative transformation. Having previously drawn a fine line between literature and music, the festival now relies heavily on the latter as its change of location accompanies it. Having moved from the Royal Theatre to the area surrounding the Grote Markt and Paard van Troje, Crossing Border this year boasts a line-up heavy on alternative music which still remains at the root of what the festival has always been about. The first day of the two-day festival featured stand-out sets from Tucson natives XIXA and London post-punkers Shame, as well as book readings by Tim Burgess of The Charlatans and Karl Hyde of Underworld.

Mauritanian vocalist Noura Mint Seymali appeared early on in the evening in the Heartbeat Hotel, performing tracks from her 2014 record Tzenni. The extremely sparse crowd didn’t seem to faze Seymali and her band; rather, it spurred them on to give it their all. During the third track, a side door opened and some 100 people walked into the room, subsequently ensuring that Seymali had some sort of audience to perform in front of. Regardless of the turnout, though, Seymali managed to prove that her African-tinged griot music could be pulled off well wherever the surroundings may be. The Heartbeat Hotel may in itself be a remaining venue from Crossing Border’s previous incarnation, however this year it’s made a move to the small room of the Paard van Troje. Two new additions to the festival site this year are the Korenhuis (literally translated to the choir house) and the Lutherian Church, both of which are a stone’s throw from all other involved venues. Charlatans frontman Tim Burgess appeared on the Korenhuis stage early on during proceedings, allowing himself to be interviewed in support of his new book Tim Book Two, a clever wordplay on the Malian capital of Timbuktu. His session there was followed by Underworld member Karl Hyde in the Lutherian Church as he read out excerpts of his new book I am Dogboy. New Yorker Xenia Rubinos took to the Korenhuis later on in the evening, bringing her eclectic variety of noise, punk and energetic soul to the room. New album Black Terry Cat featured heavily as Rubinos energetically danced around the stage without a single care in the world. The room responded affably to her energy, with one wheelchair-bound man moving to the best of his abilities across the floor. Welsh songstress Gwenno appeared down the road in the Zwarte Ruiter, which is a typical Dutch pub. The electronic vocalist is currently touring in support of her new Welsh-language album Y Dydd Olaf, which explores ethereal looped soundscapes and features hypnotic vocals courtesy of the “one man band” that is Gwenno. Well, that would usually be the case had it not been for her harsh (and slightly unnecessary) guitar accompaniment last night. The Zwarte Ruiter is one of the most important new aspects of Crossing Border’s shake-up, laying an emphasis on smaller international acts whose main focus lies in chaotic riffs and hard-hitting vocals. London punks Shame demonstrated this well, taking to the sweaty pub whilst spitting beer into the crowd and attempting to curate crowd carnage for the duration of their post-punk heavy set. Over in the Heartbeat Hotel, Brazilian troubadour Rodrigo Amarante performed a short but sweet acoustic set in front of a full room, utilizing his mellow vocals as a means for crowd hypnosis. His lilting acoustic undertones suited his vocals well, with large swathes of Brazilian fans in attendance for the duration of his set. Irish vocalist Lisa Hannigan managed to attract a full house to the Lutherean Church as she performed tracks from her beautiful new record At Swim. Accompanied by a live band, Hannigan’s vocals soared through the church with effortless ease as she held the crowd in the palm of her hand. Tuxon rockers XIXA closed out proceedings in the Korenhuis not too long after, presenting their observations from travels throughout the Arizona desert in song form. Incorporating a whole host of intricate melodies and ferociously fuzzy guitars, XIXA managed to encapsulate the full room without much difficulty as they kept crowd interaction to a bare minimum. Cloaked in smoke and dark lighting, XIXA may well have been the most exciting musical act of the day as well as the most visually intriguing. Their set brought the first day of a revamped Crossing Border Festival to an end, one which has seemingly ditched their literature-based theatrical image and gone for something which rather lends itself to a more urban atmosphere. Not that this is a bad thing, though; rather, it just takes some getting used to if you’ve been a visitor to the festival for quite some time, like most people have. It’s essentially a new festival with a whole new atmosphere, but at its core you’ll still find the pure essence of what Crossing Border is all about. Crossing Border Festival continues today with performances by The Low Anthem, The Big Moon and Warhaus.