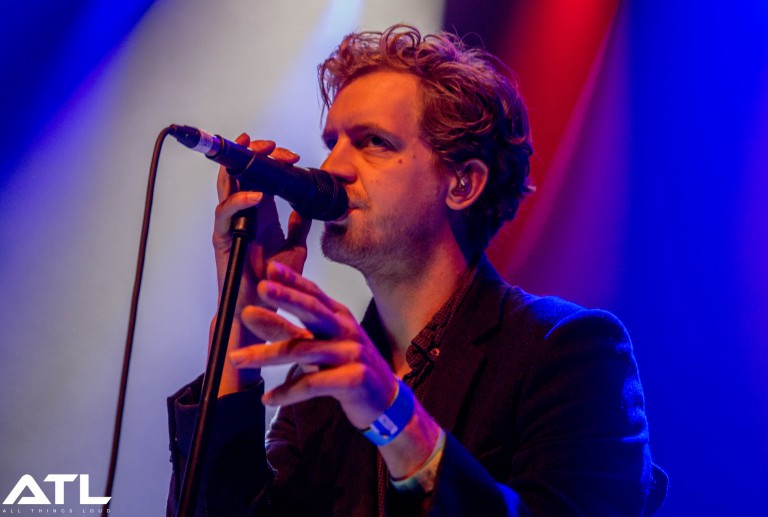 After ensuring that some 3,000 revellers accustomed to a brand new location and visual identity, Crossing Border Festival finally managed to come to life during the festival’s final day. Taking place in the heart of Den Haag, this year’s festival has drawn a more alternative crowd which falls right in line with their choice of musical booking. During the festival’s second day, the likes of PJ Harvey (who read poetry), Minor Victories and The Big Moon stood out head and shoulders above the rest.

British musician PJ Harvey took time out of her busy touring schedule to read out excerpts of her new poetry book, The Hollow of the Hand. The book, which features illustrations by former war photographer Seamus Murphy, is comprised of Harvey’s own work, parts of which she read in front of a 500-strong crowd at the Lutherean Church. Balthazar frontman Maarten Devoldere introduced The Hague to his new solo project Warhaus in flamboyant style, incorporating darker and grittier elements of brooding indie rock. Accompanied by a guitarist and drummer, Devoldere made use of a loop system and various instrumental effects as he commandeered the stage. Debut album We Fucked a Flame Into Being came out in September, with standout track The Good Lie making for a highlight in the set. It’s not expected that Devoldere will take his solo music far, with Balthazar set to become his main priority again next year. Missouri vocalist Angel Olsen took to the Raven stage just before Devoldere’s set in the Heartbeat Hotel, presenting the full room with a short but sweet set of tracks from new album My Woman. Crowd interaction remained at a minimum, however Olsen’s serene vocals and tight backing band kept the crowd in the palm of her hand for the best part of an hour. London four-piece Palace performed a set in the Korenhuis later on in the evening, with Son Mieux frontman Camiel Meiresonne introducing their set as one that will go down in Crossing Border history, similar to The National’s much famed show six years ago. And he certainly didn’t lie, because Palace’s debut album So Long Forever is one of the tightest and well thought out records of the year. Their set may well have been one of the best of the weekend, alongside Minor Victories’ hypnotic hour in The Raven. The supergroup, comprised Slowdive, Mogwai and Editors’ members, have been around for just over a year, having made supersonic waves across the world. Slowdive frontwoman Rachel Goswell took on vocal duties alongside guitarist Stuart Braithwaite (Mogwai) and bassist Justin Lockey (Editors), with their self-titled debut album making out a large part of the set. Encompassing a cacophony of electronic warbles, hypnotic vocals and pummelling rhythms, Minor Victories made for an aural and visual sensation. London quartet The Big Moon took to the Zwarte Ruiter not too long after, with their vibrant collection of garage-infused indie rock ensuring that nothing less but a full crowd descended upon The Hague’s sweatiest bar. Frontwoman Juliette Jackson and her band all played off each other extremely well, rarely putting a foot wrong as they proved that all the hype surrounding them is most certainly valid. Back in The Raven, Rhode Island collective The Low Anthem somehow pulled off one of the most convincing headline sets in Crossing Border history, utilizing a whole variety of obscure instrumentation (see: a 1950s typewriter) to prove a hypnotic and borderline obscure point. It may not have remained entirely encapsulating for the entirety of the set, but it was certainly enough to ensure that the first ‘new’ edition of Crossing Border remained relevant and interesting. Sure, Crossing Border’s location change may have been somewhat surprising to most, but on the whole it proved to be a step in the right direction for a festival who were in dire need of a revamp. With an even more exciting edition set for 2017, it’s anyone’s guess as to what Crossing Border will do next. Whatever they do, though, it’s set to be exactly what we always wanted from the festival: cutting edge, intriguing and mesmerising.

Crossing Border will return next November. Find more shots from the second festival day below.