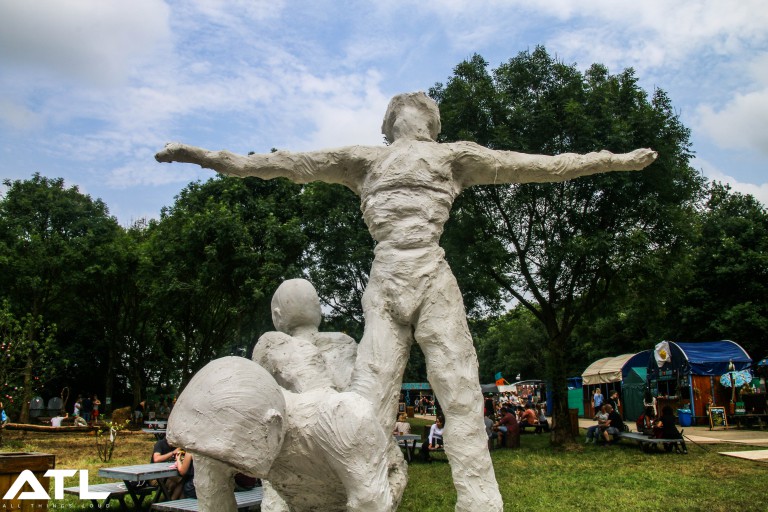 Once again, we’re going to kick off our latest festival report by talking about the weather. Earlier this month, adverse conditions spelt the end for Rock am Ring, with Best Kept Secret experiencing similar troubles last week. Now, four festivals at once have had to make do with problems of their own: Glastonbury (no explanation needed), Jera on Air (some visitors were said to be knee-deep in mud), Hurricane (where the festival was delayed for two hours) and Holland’s very own Down the Rabbit Hole, where the campsite opening was delayed due to mud needing to be pumped out of the ground. Has it affected the overall nature of the festival weekend, though? Not at all. Down the Rabbit Hole’s first day saw the weekender expand to 20,000 visitors from various European countries, with PJ Harvey closing out a sunny first day.

One thing to keep in mind about Down the Rabbit Hole is, apart from its fierce competition with Best Kept Secret, that it’s essentially the closest Holland will ever get to emulating Glastonbury. With a line-up that shares plenty of names with the Somerset event and a layout which looks just as fairytale-ish and dreamy as Glasto, you wouldn’t even be surprised if someone told you that you weren’t in Holland. That’s until rapper Fresku takes to the stage, encompassing irritatingly cliché percussive beats and “newborn man” raps in a set which pulled half a crowd inside the Hotot tent (the festival’s own main stage). Over on the Teddy Widder stage, Norwegian musician Sivert Hoyem took #1 album Lioness to Beuningen (where the festival is held), performing a tight and haunting set. Hoyem is an intimidating, tall man with a prominently bold face and lanky arms which perfectly enable him to throw jangly acoustic rhythms into his tracks. Set opener Lioness was a stark reminder that, on a day where the United Kingdom disastrously voted to leave the EU, music isn’t always pleasant and comforting. Hoyem and his band are further from pleasant than you can imagine; rather, they’re hauntingly beautiful. Former BBC Sound of… winner Michael Kiwanuka took to the Hotot stage not too long after, with the London singer-songwriter’s new musical direction encompassing seven-minute long space-outs and Pink Floyd-esque jams which are a world away from his lilting early output. As a mid-afternoon act, Kiwanuka did pretty well in entertaining the bulk of arriving festivalgoers, many of whom had waited for ages to get onto the festival site due to chaotic conditions.

Brooklyn garage rockers Parquet Courts entertained the festival’s smallest tent, the Fuzzy Lop, for a solid hour of tracks which drew from new album Human Performance and its predecessors. They’re the first ever band to descend upon the rabbit hole twice, having last appeared in 2014 when they performed for a nearly empty tent (having fallen victim to unfortunate clash with The Black Keys). Now, though, the band had no trouble in pulling a full tent as their witty sarcasm echoed through the tent alongside popular tracks old and new. Their set at Pinkpop earlier this month may have been more energetic and grapping, but their show in the Fuzzy Lop still proved that the band are a formidable force to be reckoned with. Another formidable force to be reckoned with is Nathaniel Rateliff and his band The Night Sweats. Descending upon the Hotot stage like a mixture of the finest blues rock-meets-Bruce Springsteen, Rateliff and co. made for the day’s first big party with a capital P. Set opener I Need Never Get Old made for the first huge moment of the day as Rateliff and his big band bounced around the stage energetically with effortless ease. The Hotot definitely responded, cheering the band on repeatedly as Rateliff held them in the palm of his hands. Standout track S.O.B. appeared towards the end of the set, encompassing catchy handclaps and Rateliff’s soulful voice to reach a captivating end point. Aussie slacker rocker Courtney Barnett had the hard task of following up such a tight set with her own show on the Teddy Widder stage, pulling a full crowd who didn’t really seem all too bothered until she pulled out the upbeat ‘hits’. Slow burner Depreston was met with crowd conversation, before popular cut History Eraser sent the crowd into ecstasy as people came running back into the tent. Was it as powerful as her set at Lowlands last year? No, but Barnett now definitely looks like she’s finally back in the groove of doing what she does best. Set closer Nobody Really Cares If You Don’t Go the Party proved just this, with the Melbourne-native looking absolutely ecstatic. Back on the Hotot stage, hippie stoner Mac DeMarco packed out the tent as he and his band (featuring brand new topless bassist Rory) performed what was essentially an exercise in slacker rock. Taking to the stage with a high-pitched “helloooooo”, DeMarco seemed to have prepared himself for a relaxed set, something far removed from his common onstage chaos. On record, set opener The Way You’d Love Her sounds like something out of a Spongebob soundtrack; live, though, it’s a whole different beast which packs more punch than Mike Tyson did at his peak. Follow-up Salad Days sparked the first big sing-a-long moment of the day, with the first crowdsurfers slowly but surely emerging throughout the tent as festival patron Seasick Steve watched from the side (god knows what he does here every year save for a couple of acoustic sessions). Give it a few years and you’ll most likely see DeMarco topping the bill in Beuningen; he’s definitely capable of it. Over on the Teddy Widder, Mancunian “we voted remain”-outfit Everything Everything took their futuristic electro-pop to the masses in a set which fell very much short of the mark. Frontman Jonathan Higgs sounded out of tune more often than not, particularly so on early track Kemosabe. New album Get to Heaven is a sublime lesson in slick electro pop, but it just didn’t cut it live this time round. Headliner PJ Harvey followed on the Hotot stage afterwards, with her huge live show encapsulating the crowd for a solid 75 minutes. New album The Hope Six Demolition Project featured heavily throughout the set, with Harvey even taking the opportunity to address Brexit by reading out a heartfelt poem from 1624. Her new album is a musical documentation of the world’s key warzones (Washington DC included, unsurprisingly), and it definitely hit hard in Beuningen. She’s been out of the game for a long time, but her return is so well-timed that we couldn’t begin to imagine a musical spectrum without Polly Jean. She doesn’t just know how to make a statement; rather, she knows how to hit that statement home with her powerful musical missives. And we wouldn’t have it any other way. Welcome back, PJ.

Down the Rabbit Hole continues today with performances from The National and Flume.