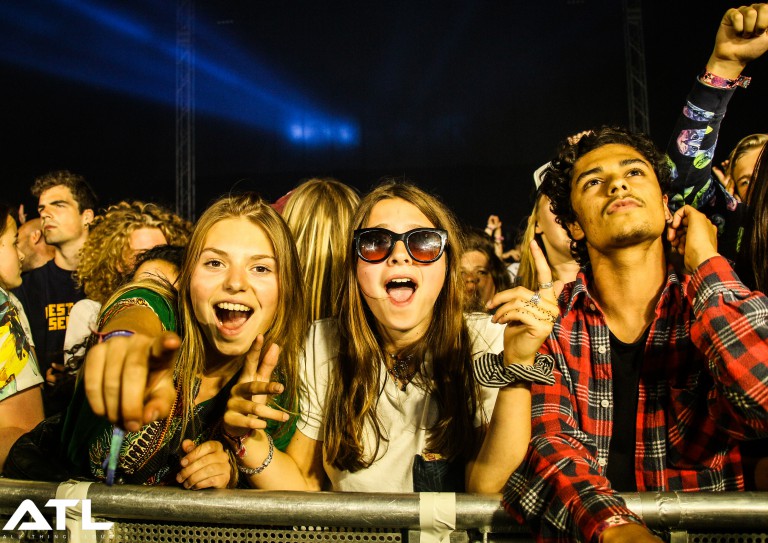 Nothing lasts forever, right? That’s what Down the Rabbit Hole visitors must have thought to themselves as they stepped out of their tents on Saturday morning, being greeted by near-thundery conditions as they did so. Where did Friday’s perfect weather go? Literally down the drain, unfortunately. Not that this stopped the festival’s second day from far surpassing its first day, with The National closing out proceedings alongside stellar sets from Lianne La Havas, Charles Bradley and Whitney.

Said Whitney took to the Fuzzy Lop in the early afternoon, having just released the fantastic debut album Light Upon the Lake. Set opener Dave’s Song set the tone for the next 45 minutes, one which encompassed the likes of Golden Day’s catchy outro, No Woman’s majestic ending and No Matter Where We Go’s rock ‘n roll vibe. Frontman and drummer Julian Ehrlich, formerly of Smith Westerns, positioned himself at the front of the stage as he wittily interacted with the crowd throughout. Whitney are by no means a ground-breaking band, but they definitely know how to release simple pop songs with just enough lilt and beauty to captivate a listener for years on end. Over on the Hotot stage a couple of hours later, Daptone Records legend Charles Bradley absolutely tore the house down with his absolute dyke of a voice. It took him 10 minutes to take to the stage, with his expansive live band pulling everything they had out of the bag, before Bradley’s keyboardist introduced him by asking the crowd if they “were up for some good old loving”, before “bringing out the lover boy”. Said lover boy, Mr Bradley himself, bounded about stage like a returning hero as his voice absolutely destroyed the tent. To see someone of his age (68) still at the top of their game is an absolute wonder, because there aren’t many people like Bradley around today who can pull off what he pulls off.

Following Charles Bradley on the Hotot stage was Dutch hype band De Staat, whose viral Witch Doctor video has landed them recognition from the likes of Tommy Lee, as well as recent touring partners Muse. The Torre Florim-fronted outfit took to a stage cloaked in smoke as they kicked off the set with new album track Blues is Dead. As per usual, De Staat filled out the tent with their now-unique brand of quirky alt rock. It’s nothing special when the band does it 100x per year in the same country, however it still carries a sense of Dutch pride with itself whenever the band venture abroad and show the world what they’re missing out on. The likes of All is Dull and Peptalk stood out, with predictable closer Witch Doctor seeing Florim (predictably) descend into the crowd for a mass-orchestrated circle pit. On the Teddy Widder stage, post-punk quartet Savages meant business from the word go as their furious undertones and rhythms intertwined with so much panache and vigour that the stage supporting Jehnny Beth and co. almost collapsed. Mexican collective Sonido Gallo Negro pulverized the Fuzzy Lop at the same time, bringing their death-obsessed skeletal imagery to Beuningen’s smallest stage for the weekend’s biggest party. Need we say more? No.

Back on the Hotot stage, soul starlet Lianne La Havas performed in front of a crowd which slowly filled up as she started playing. New album Blood is a pristine exercise in soulful grooves and lovelorn lyrics, with her onstage presence unfortunately almost void. Sure, she has a fantastic voice (as demonstrated on standout track Is Your Love Big Enough?), but she could do much more to keep the crowd captivated for more than ten minutes. The same goes for Glen Hansard, whose spell-binding folk rock (complete with strings and horns) stood out in essence but eventually fell short of the mark. Headliners The National subsequently went on to pack out the Hotot completely, even if brand new opening track Find a Way was aborted during its failed intro. Proper set opener Don’t Swallow the Cap became an instant trip down memory lane for the band’s dedicated front row fans, with the likes of Bloodbuzz Ohio and later track Mr November absolutely standing out far and wide above everything else performed on the Hotot that day. Frontman Matt Behringer may have been relatively tipsy during the performance as he majestically strutted around stage, but it only added to the magnificent frontman effect he has on people. When their new album finally comes out, it’s sure to set in stone the fact that The National are absolute festival headlining behemoths. Pinkpop next year, anyone?

Closing out the main part of the day on the Fuzzy Lop stage was garage rock weirdo Ty Segall, who performed with his band The Muggers for an hour’s worth of mental, fuzz-laden garage. Performing in a hoodie for the most part, Segall seemed to choose obscurity over everything else as he tried to come across as the serious madman that he is. It worked, with the crowd going absolutely mental from the word go. Wherever he goes, Segall knows how to destroy a crowd’s ability to move by employing his darkest, heaviest grooves, rhythms and screeched vocals. Just like a chameleon who changes colours on a regular basis, Ty Segall is a musician who always teaches people to expect the unexpected. On the Teddy Widder stage, Australian producer Flume took his beautiful light show and production to Beuningen for what was essentially a greatest hits live mix for the masses. Dropping megahit Holdin’ On at the start of the set, Flume made sure that he kept the crowd in the palm of his hands as they lost their minds to his brain-frazzling techno house. One day, the likes of Flume will be able to headline Down the Rabbit Hole. Last night, however, was just a warm-up.

Down the Rabbit Hole concludes today with performances from Nothing But Thieves, DMAs and Anohni.