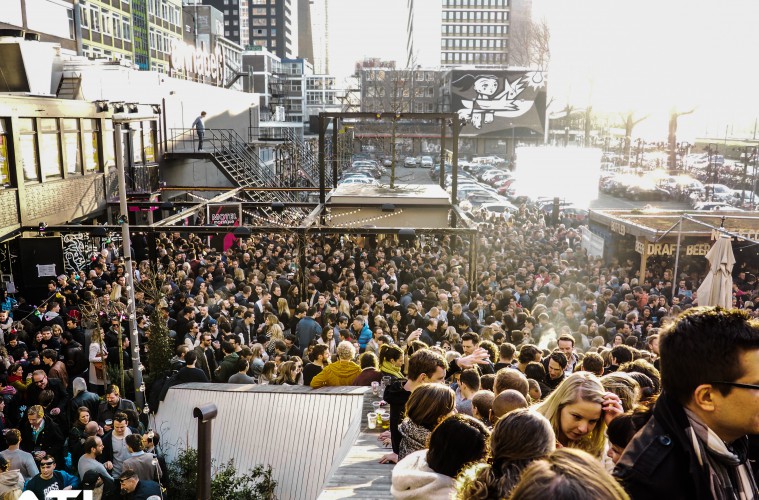 For the 16th consecutive year, the centre of Rotterdam has been transformed into an expansive cultural hub filled with music, dance, art and culture. Motel Mozaique has slowly but surely become one of the most exciting weekends in the Dutch off-peak festival calendar, spanning a line-up of both national and international acts. This year, with the Rotterdam marathon also taking place, adjustments have been made to ensure that more of Rotterdam has been included in order to make the festival a true example of what the Dutch harbour city is really capable of.

This year’s live sessions took place in the main hall of Rotterdam’s picturesque Arminiuskerk, which is a huge church in the centre of the city. Two of the more notable sessions were courtesy of English musician Jamie Woon and Welsh artist Gwenno, both of whom almost entirely packed out the church. Woon was accompanied by two backing vocalists as he performed stripped-back renditions of tracks from new album Making Time, which came out last October. His silky smooth vocals and underpinning guitar lines co-operated nicely with the Arminiuskerk’s acoustics, enabling the sound to echo far and wide. Gwenno later performed tracks from 2015’s Welsh language album Y Dydd Olaf, which encompasses bubbling electronics and hypnotic vocal lines from the former Pipettes frontwoman. Both artists later on performed packed sets to excitable crowds in the Schouwburg theatre, which is once again part of Motel Mozaique’s focal point.

The main “centre” of the festival is, as ever, the Schouwburgplein. With a small stage backed by the massive Schouwburg theatre, it’s where most of the big action happens. Last night, the likes of Damien Jurado and the aforementioned Jamie Woon performed sets there to critical acclaim. However, for the first time in a while, there was no major music tent on the square. This year, the brand new Annabel venue serves as a main hub for bands which lean more towards the indie rock spectrum. Producer/vocalist Shura opened the venue last night with a 45-minute set which drew heavily on tracks from her upcoming debut album Nothing’s Real, which is due in July. Set highlight Touch was a hypnotic highlight in the set, one which pulled a near-full crowd to the already-packed Annabel neighbourhood. This isn’t the last we’ve heard of Shura, because she certainly has a hell of a lot going for her and her band. Later on in the same venue, last-minute addition Blossoms performed a stellar show in front of an unfortunately half-full crowd. The band were drafted in earlier this week to replace DIIV, who cancelled due to unfortunate health reasons. The Stockport outfit had just travelled across from a set with The Coral to show Annabel what they were capable of, and it’s a lot. With a debut album on the way, it was all eyes and ears on their previous output, which includes the hypnotically catchy single Charlemagne. Encompassing elements of psychedelia and alt rock into their set, the Tom Ogden-fronted quintet have got a big year ahead of them which will include a set at Best Kept Secret later this summer. They may not have pulled a huge crowd, but Blossoms still managed to impress.

Whereas the Annabel was more aimed towards accessible indie rock/psychedelia, the legendary Rotown leant itself towards heavier shows. Following an opening set from Flying Horseman, the evening really got going once Brighton’s The Go! Team took to the small stage. The quirky six-piece consists of leader Ian Parton and his five accomplices, all of whom flitter between different instruments as they combine police show-esque theme tunes, energetic indie rock and hip hop. The combination is an odd one, but everything properly comes together onstage in what is a truly remarkable visual and aural spectacle. Frontwoman Ninja took on vocal duties for the most part, interacting with the crowd at a constant rate as she bounded about the stage energetically. Alongside her, guitarists Sam Dook and Kaori Tsuchida added some rockier contrast to the show whilst bassist Jaime Bell remained the quietest member of the group. Standard percussionist Chi Taylor completed for line-up on the night, one which will go down as one of the best this weekend. Set highlights Huddle Formation and Apollo Throwdown made for the biggest crowd reactions, and quite rightly so. There isn’t an easy way to describe The Go! Team’s music in words, but this isn’t very necessary when you can just sit back and watch in awe as the sextet blow you away with a cacophony of sound. Following them in the Rotown were English rock sensation VANT, who are surely set for greatness in the near future. Having been hailed as the next big thing by many, it wasn’t a surprise that the Rotown was absolutely packed and ready for an hour of in-your-face garage rock. Set opener The Answer was an instant statement of intent courtesy of frontman Matt Vant, who spent various moments in the show sticking his head into the crowd and inciting hefty crowd action. Not that he needed to do this, though, because the music very much did the talking. A closing salvo of tracks which included the massive Do You Know Me? brought the whole evening to a cataclysmic close which demonstrated exactly why VANT are worth taking seriously.

The first day of Motel Mozaique featured further performances from the likes of Damien Jurado, Flying Horseman and Meatbodies. Check out Jan Rijk’s pictures of Jurado, Horseman and an atmosphere impression below.