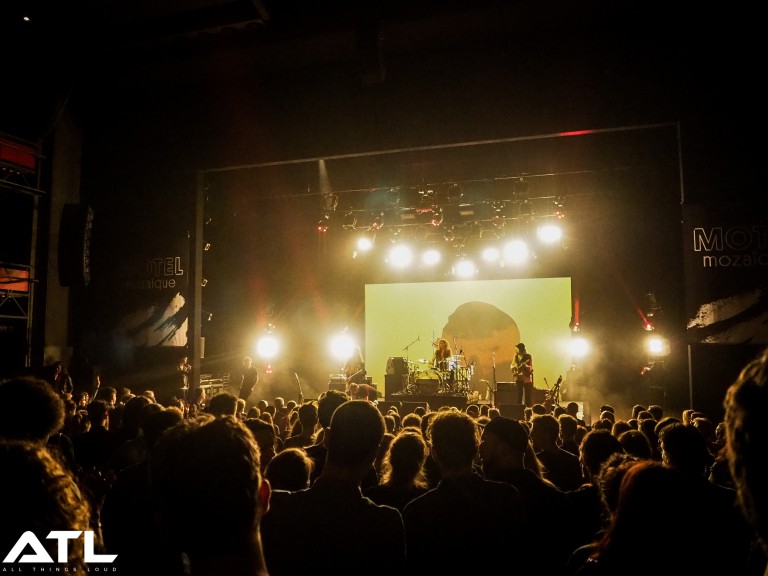 Following a captivating first day, Motel Mozaique subsequently outdid itself during a busy final day in Rotterdam this weekend. The 16th edition of the city-wide festival saw closing performances from the likes of Formation, Beau, jennylee and MY BABY. Alongside this, a handful of live sessions once again took place amongst preparations for the Rotterdam marathon, which has ensured that Motel Mozaique rounded up its proceedings earlier and quicker than usual.

The day was once again kicked off by a handful of live sessions in the Arminiuskerk, amongst them extremely well-received sets by NAO, Formation and Marlon Williams. Whereas the latter impressed the packed-out church with his silky smooth brand of Americana and folk, the former two went down a funkier, more electronics-laden pathway. Formation are surely going to be a massive act in the future, with both of their sets filled with boundless energy from the live quintet. The highlight during both shows was popular track Back Then, a song which is about the times in which the band spent visiting skateparks in Rotterdam. The London outfit know exactly where to draw the line between in-your-face electro funk and indie rock, even if there were no guitars present onstage. Instead of making use of a six-string, the Will & Matt Ritson-helmed collective utilized two sets of synths, a handful of cowbells and the extremely tight rhythm section that is Sasha Lewis and Kai Akinde-Hummel. Akinde-Hummel’s relentless energy was an extreme sight to behold during both sets, in particular during the band’s late show at the Rotown. Frontman Will Ritson spent the end of the show circling the crowd with his cowbell, ensuring that nobody stood still for the duration. We’re not quite sure what’s going to come of Formation at the moment, but it can only be good things for sure. NAO, on the other hand, had a go at pulling off a soul-tinged, funkier set which only really managed to sound like reproduced and regurgitated pop-soul. Instead of managing to stand out like Formation do, NAO blends into the crowd rather unimpressively, something which came across during her live session as well as her evening show in the Annabel.

In fact, the Annabel was home to one other relatively woeful performance on the Saturday – Warpaint bassist jennylee. Having gone solo and released subsequent debut record right on last year, jennylee (full name Jenny Lee Lindberg) performed an hour-long set in front of a half-full Annabel. Although Right On is a decent record (as well as one hailed by the uber-hipster Pitchfork community), Lindberg’s live show did little to impress the wavering crowd. Set opener blind echoed silently through the speakers as Lindberg ran back and forth to the stageside monitors, before the more energetic boom boom made for the most interesting moment in the set. The song possesses tight basslines, intricate percussive swooshes and lilting guitar lines, all of which underpin Lindberg’s hazy, stoner rock vocals. Ending the set on a cover of Warpaint’s spectacularly catchy Disco//very, it became instantly clear that Lindberg didn’t entirely manage to convince Rotterdam with her pseudo-hipster attitude and quirky behaviour. Better luck next time, Jenny. Over in the Schouwburg theatre an hour earlier, Dutch/New Zealand trio MY BABY absolutely blew the roof off the venue with their hour-long combination of shamanic power rock and funk. It’s hard to describe the band properly, but frontwoman Cato van Dijck has one hell of a voice which she manages to consistently make perfect of use for the duration of her stint onstage. MY BABY may come across as “just another Dutch act” who you’d find on every street corner festival, yet this time round it really is something worth getting excited about.

Elsewhere, New York duo (and live trio) Beau performed a stunning set in the picturesque Paradijskerk in front of a full crowd. Performing tracks from this year’s debut record That Thing Reality, frontwomen Heather Golden and Emma Rose Jenney’s voices echoed seamlessly throughout the venue. Early highlight C’mon Please encompassed blues-y undertones, before the swirling One Wing swayed in and out of catchy consciousness. Beau, just like a handful of acts this weekend, have got a lot going for them and are definitely a group who you’ll be hearing a lot from in the coming months. And with that, Motel Mozaique’s 16th edition came to a huge ending by means of a vibrant dance night in the Annabel courtesy of Dutch house pioneer Serge and upcoming British producer Julio Bashmore, both of whom went great lengths in captivating a full club floor. Motel Mozaique eventually came to a close at 6am, which was a mere four hours before the Rotterdam marathon got underway and took over the city in a completely different way to how Motel Mozaique did.

With so many performances taking place across the weekend throughout Rotterdam, it was hard to keep track of everything that was going. Photographer Jan Rijk was there to capture more of the weekend’s antics, and you can check out his shots below amongst various other shots from Motel Mozaique 2016.