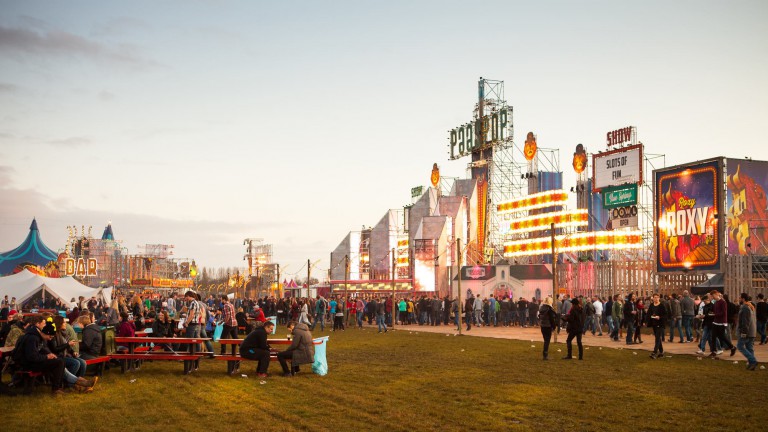 Yesterday, the Dutch festival season welcomed some 20,000 people to the tiny Schijndel in order to properly kick off what is set to be an exciting summer. The annual Paaspop Festival, which takes place every Easter, carries with itself an annual Las Vegas theme which is heavily reflected in the way the small festival site is decorated. Blinding lights, nightclubs, circus freaks and the like all parade around de Molenheide for the duration of Paaspop’s 3 days, with the music a very evident main attraction. This year, big international names like The Prodigy, Underworld, Enter Shikari and Hollywood Undead will all appear in Schijndel alongside the likes of Dutch big shots De Staat, Golden Earring and Jett Rebel.

One thing you should probably know about Paaspop before you get started is the wide age range of its visitors. You may be losing your shit to Finnish power metal with your mates, but you’ll still have to look out for OAPs in the surrounding area who are here to “have a fun time”. Not to say that this makes the experience less exciting, though; on the contrary, Paaspop is a festival which has something for everybody. On the festival’s first day there was such an eclectic range of music on show that you could probably experience your own festival within a festival.

Dutch carnival outfit BZB opened the festival’s Apollo stage, making use of an Olympic-themed introduction video to light a massive onstage flame and career through a 45-minute set full of traditional Dutch party music. It’s not the most infectious or exciting music available, however it did a good job of welcoming the cold and weary Paaspop 2016 population. With wet showers all around for a big part of the morning, Paaspop was subsequently an extremely muddy affair for most visitors. Finnish heavy metal outfit Battle Beast had the hard task of impressing an extremely sparse crowd in the Thunderbolt just after 4pm, yet this didn’t deter the Noora Louhimo-fronted quintet from pulling out all the stops with their generic range of classic heavy metal. There were hints of 80s glam rock thrown in and amongst the controlled chaos, however it just wasn’t enough to impress. The stage itself, though, was perfectly suited to a band of this calibre. The Thunderbolt is essentially an end-of-the-road biker bar with skulls, whiskey bottles and women’s underwear strewn across the walls. It’s a perfect stage for bands like Battle Beast, although it could definitely make do with a little more carnage. Rectum Raiders tried to incite chaos an hour later, managing to do so more down to their ‘controversial’ image and near-nude rock-outs. The band’s hardcore garage punk drew a sizeable crowd, something which was evident for almost all of the Dutch bands appearing at Paaspop.

You’d think that the allure of a huge international band would be enough to pack out a tent to the rafters (for example DeWolff’s set in the Phoenix), but this definitely wasn’t the case for German power metal collective Powerwolf. Despite honestly pulling off one of the day’s heaviest and most memorable performances, it clearly wasn’t enough for the religious rockers to pack out the quarter-filled Phoenix. Dressed in full-on gothic garments and white face make-up, Powerwolf are a poor man’s Ghost with music ten times heavier. One band who definitely do know how to pack out a tent are Dutch hardcore rockers John Coffey, who have had an absolutely massive twelve months. The hype is clearly still there for David Achter de Molen and co., with new EP A House for Thee being the main focus during their hour-long, chaotic set. From absolutely huge circle pits to the demand for people to swap clothes, John Coffey know how to work a crowd like no other. Set highlight Romans made for huge swathes of crowdsurfers, with security hardly able to keep up. It’s inevitable that John Coffey are well on their way to becoming Holland’s biggest ever rock export. Later that evening, Golden Earring proved why they too were once the biggest band in Holland by pulling off a 90-minute greatest hits set in front of some 6,000 people. The Den Haag quartet’s set featured the likes of mega hits Twilight Zone and When the Lady Smiles, both of which were absolute smash tracks back in the band’s heyday. They still pack just as much punch as they did back in the day, even if their newer output isn’t as renowned as what they used to put out.

When you take a look at all the heavy bands in Schijndel this weekend, you would almost assume that you stumbled across a metal festival. However, for every Scandinavian metal riff or hardcore breakdown, there were at least four rappers, six DJs, three pop sensations, a dozen upcoming stars and one spectacularly on-point Muse tribute band (Musest) at your disposal. Two of these upcoming stars were Den Haag indie poppers Son Mieux and Norwegian sextet Kakkamadafakka. Both of them took the Jack Daniels Stage by storm, with the latter sarcastically walking on to the instantly recognizable Champions League theme tune. Elsewhere, rude boys Lil’ Kleine and Ronnie Flex packed out the Roxy to a point where it was shut off, before Jett Rebel “entertained” a similar crowd with his unorthodox retro-pop. Neither are an acquired taste, however they definitely only appeal to a very specific mass audience. Thing is, though, a festival like Paaspop is all about the variety. Whilst you and your mates lose yourselves in a pit, an older couple will be experiencing a bout of nostalgia. There’s something there for everyone, and that’s what makes Paaspop such a great experience regardless of your background.

Paaspop Festival continues today with sets from Enter Shikari, The Prodigy and Deafheaven.