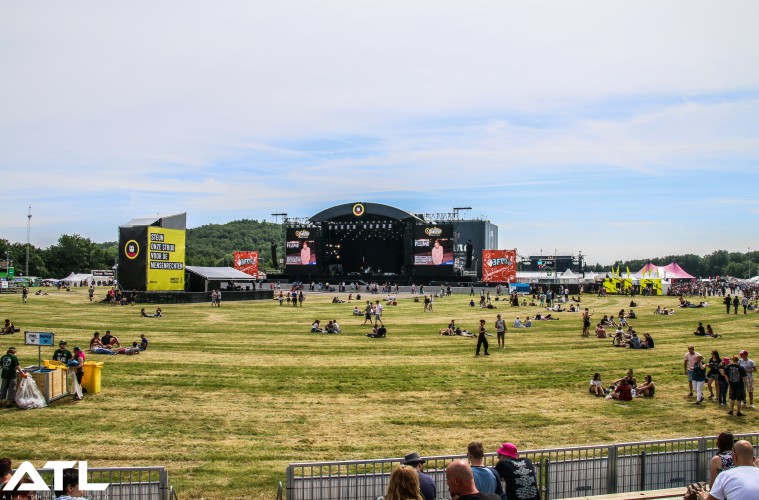 It’s been a tough week for festivals. Last week, both Rock am Ring and Governors Ball Festival were called off early due to drastic weather conditions, with the former leaving more than 90 people injured and two others need resuscitation. Now, six days later, it’s time for another bunch of weekend festivals to battle all types of weather conditions and hold it through till Monday. Pinkpop Festival, Holland’s biggest uninterrupted music festival, opened its doors for the 47th time with performances set to take place by some of the world’s biggest artists. Friday saw Red Hot Chili Peppers headline, with Major Lazer, James Bay and Bastille also taking to the stage. As is tradition at Pinkpop, the first day was opened by the annual Nu of Nooit winner. This year, Michiel Claessens-fronted project Storksky opened the Brand Bier tent with a short set which mixed in elements of Queens of the Stone Age riffage and Royal Blood groove. Although it wasn’t enough to captivate a huge tent for 45 minutes, you could definitely sense plenty of potential in Storksky’s music. Over on Stage 4, The Struts managed to pull the biggest crowd of the day as their swagger-flecked Rock ‘n Roll took the Dutch fans by storm. It was the band’s first ever performance in Holland, and you could definitely sense the excitement in the air as vocalist Luke Spiller flamboyantly bounded around the stage full of energy. Comparisons to Mick Jagger certainly aren’t too far-fetched when you see what kind of onstage chemistry the band possess, with early set highlights Could’ve Been Me and Kiss This setting the scene for future world domination. Claiming that a band will achieve world domination is a tall order, however The Struts have everything that a band needs to make it as far as great forefathers The Rolling Stones and Motley Crue. Watch this space. Back in the Brand Bier tent, folk outfit Bear’s Den previewed new album Red Earth & Pouring Rain to a packed crowd of all ages. The record comes out on 22 July, with the band premiering a few new tracks in Landgraaf. Compared to debut album Islands, Bear’s Den’s new music carries far more depth and structure. The sense of gravity it adds to the music in a live setting is remarkable, with the whole tent falling silent at the click of a finger. Set highlight Above the Cloud of Pompeii sent the Pinkpop crowd into a dreamy frenzy as the band successfully completed one of the summer’s first big festival sets. Over on Stage 4, Pinkpop celebrated an exclusive booking: the first Japanese act to ever perform in Landgraaf. One OK Rock took to the stage in front of a packed crowd as they performed tracks from last year’s successful 35xxxv, which was produced by go-to scene producer John Feldmann. The Tokyo quartet performed a set which was perfectly structured from start to finish. Every single lick, beat and riff seemed almost pre-planned to the point where even the band’s facial expressions seemed pre-determined. Not that the robotic nature of their set mattered all too much, though – One OK Rock know how to put on a show and they do it well. Early highlight Cry Out made for an emotive moment, with the tent largely consisting of dedicated fans who travelled from far and wide to witness a Landgraaf exclusive. What’s next, Babymetal? Who knows, but what we do know is that Pinkpop can definitely do well by booking more Asian acts. The day was finished off by legendary rockers Red Hot Chili Peppers, whose upcoming release The Getaway comes out next week (17 June). It’s the band’s first album in five years, as well as their second with guitarist Josh Klinghoffer. Opening the set on a rabid instrumental jam, the band instantly made it clear that their 90-minute long set would be nothing more than a greatest hits collection with some new additions. An opening salvo of Can’t Stop, Dani California and Scar Tissue proved this easily, with the Dutch crowd responding extremely well. Not that this should be a surprise, though; Red Hot Chili Peppers have been massive on Dutch shores ever since their 90s heyday. They may be missing some spark with their newer output, but the magic is definitely still there once Anthony Kiedis and co. energetically bounce around the stage. Bassist Flea even descended upon the crowd at one point, accidentally karate kicking a photographer in the back and straight onto the ground. He gracefully apologized onstage afterwards, before newer tracks We Turn Red, Dark Necessities and 2011’s The Adventures of Rain Dance Maggie all appeared. What’s noticeable this time round is that the band have definitely upped the funk factor, interspersing the set with various instrumental jams and extended outros. Show closer Give it Away proved exactly why Red Hot Chili Peppers aren’t a band who should be long forgotten in the sands of music time; rather, they should be cherished and appreciated for their constant top-form delivery and stunning live show. The Getaway and its accompanying live campaign is sure to be a special one. Pinkpop continues today with performances from Rammstein, Doe Maar and Nothing But Thieves.