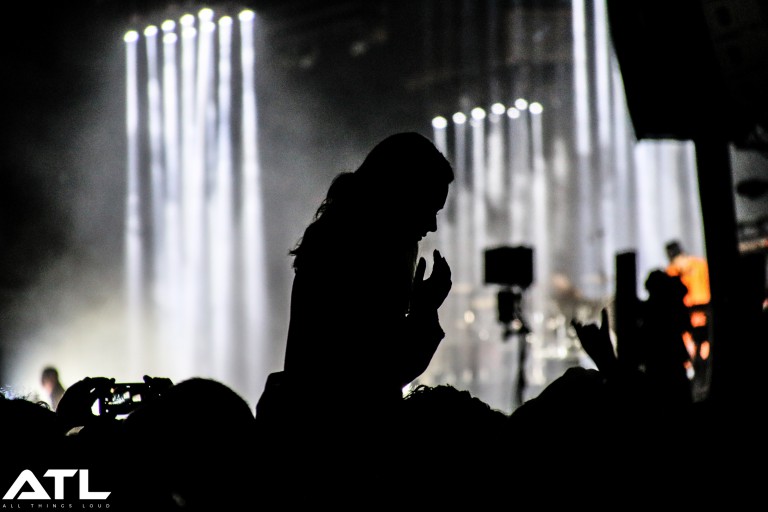 A Rammstein fan on someone's shoulders during the show. (c) Jack Parker

The second day of Pinkpop certainly had plenty of expectations to live up to, with Friday’s opening day featuring spellbinding sets from Red Hot Chili Peppers and One OK Rock (to name but two). Thankfully, though, the festival had plenty up its sleeve with a headlining set from Rammstein guaranteed to blow Landgraaf’s invisible roof off.

The day kicked off with a catchy set from Brighton-based indie collective Miamigo. Their set in Landgraaf was the band’s first ever major festival, with the live quartet certainly living up to the expectations which last year’s Hard to Love EP had set. Over on the main stage, it was up to Walk Off the Earth to warm up in the crowd, with the Canadian quintet (plus live accomplices) only just managing to pull it off. Sure, they’re snazzy and creative, but do they have what it takes to prepare upwards of 70,000 festivalgoers? Not entirely. Their set opened on the catchy Gang of Rhythm, with fan favourite Sing it All Away becoming a recurring staple throughout the set. As the show went on, the backdrop changed to reveal different periods in the band’s career, something which their abundance of covers also enforced. Walk Off the Earth started off as a cover band, with their breakthrough cover of Gotye’s Somebody That I Used to Know (five people around one guitar, remember?) standing out. They may not be the most predictable or worthy booking, but they certainly did a good job in opening the day. Over on the 3fm Stage, Pennsylvanian quartet Halestorm literally took the crowd by storm for a solid hour of balls-out hard rock. Frontwoman Lzzy Hale knows how to work a crowd, and she certainly employed all the best rock star cliché’s in her attempt to woo the Landgraaf crowd. “We’ve been waiting for 18 years to play at your beautiful festival!” she declared, not quite aware of the fact that the cliché had passed over a few years earlier. Still, though, Halestorm pulled off the set in by-numbers fashion by giving Landgraaf everything they could offer.

Continuing the trend of successful Stage 4 performance was Brooklyn’s very own Parquet Courts, who are currently touring in support of new album Human Performance. The record presents Parquet Courts at their most relaxed, whilst still maintaining the urgency of previous releases. Onstage, the quartet are nothing short of tight musically and sarcastic in their crowd interaction. “If you’re bored then there are some stalls out there” declared guitarist Andrew Savage at one point, with co-guitarist Austin Brown occasionally having a go at the odd Dutch word. Early set highlight Dust demonstrated the band’s musical growth perfectly, with the show coming to a sudden end some 15 minutes earlier than planned. With little exchange of words the band left the stage and left the crowd in confusion, something which is as odd as it is unsurprising. Nothing But Thieves followed the band over in the Brand Bier tent, performing to a packed crowd as they continued to ride the success of last year’s debut album. Set opener Itch introduced the first big anthem of the evening as Conor Mason and co. slowly but surely rolled out all the tips and tricks which they picked up from touring with Muse. Early highlight Hostage incorporated funkier elements into the mix, before a cover of Pixies classic Where Is My Mind? and show closer Ban All the Music really showed the Brand Bier tent what Nothing But Thieves were all about: anthems, balls-out rock and musical perfection. Having toured almost constantly for 18 months now, it’s a wonder that Mason’s voice is still as impeccable as it was at the beginning of last year. His voice may well be a world wonder – it’s that good. Nothing But Thieves may very well headline Pinkpop in years to come, because it’s something they’re definitely capable of.

Supporting headliners Rammstein back on the main stage were Dutch ska outfit Doe Maar, who are currently celebrating 38 years as a band. Their show in Landgraaf was merely a warm-up for the three sold out shows at the Ziggo Dome later this week, with the band incorporating hits such as Sinds 1 Dag of 2 and Smoorverliefd into their hour-long show. Maynard James Keenan-fronted project Puscifer took to the 3fm Stage not too long afterwards, performing a visually spectacular show in front of a disappointingly small crowd. Not that this is a surprise, though. Keenan may be big with his main band Tool, but Puscifer have little to no reputation in Holland for a stage headlining slot to be viable. Puscifer were also up against big shot DJ Robin Schulz, who managed to pack out the Brand Bier tent. Keenan and co. are currently touring the world in support of new record Money Shot, with the stage show incorporating live wrestling and comedic aspects which only add to Keenan’s obscure way of working. The day came to a caterwauling end thanks to German metal behemoths Rammstein. The crazy sextet with a love for BDSM and sadistic elements spent over 90 minutes entertaining a crowd filled with dedicated fans which stretched across the festival site for as far as the eye could see. Set opener and new track Ramm 4 set the tone instantly with a chant of “Ja! Nein! Rammstein!” before Till Lindemann and his band tore through an extensive back catalogue which culminated in the furious Feuer Frei, majestic Sonne and hit track Du Hast. If you base judgement on production value alone, then Rammstein still come out on top. Their live show had everything you could possibly wish for, from fire-breathing all the way through to a cacophony of fireworks. Rammstein may well be one of the world’s most captivating live bands, and that isn’t without good reason.

Pinkpop concludes today with performances from Paul McCartney, Lionel Richie and Bring Me the Horizon.