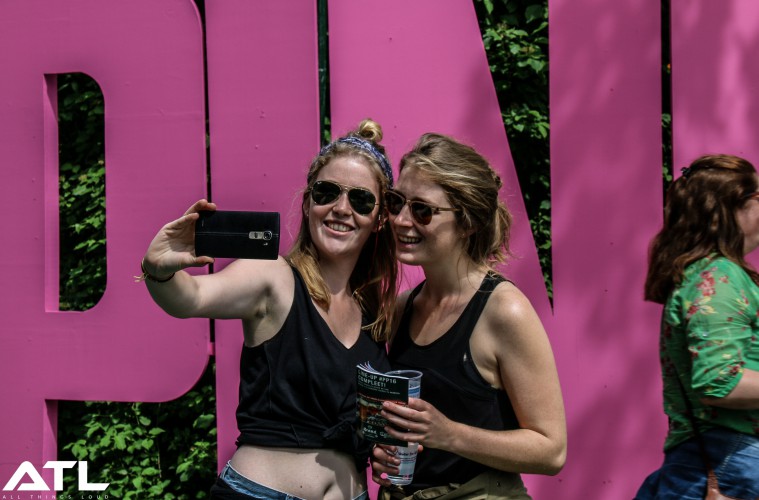 It was never going to stay entirely dry now, was it? The final day of Pinkpop was met with tons of rain as some 70,000 people were met by a living legend gracing the stage – Paul McCartney. The former Beatle performed his first ever Dutch festival set on the weekenders closing day, with the likes of Lionel Richie, Slaves and Harts also standing out throughout the day. Melbourne solo artist Harts opened the day in the Brand Bier tent, taking 2014’s Daydreamer and last week’s Breakthrough EP to Landgraaf for what was only his 3rd ever show on European soil. Harts, real name Darren Hart, is accompanied by a drummer onstage with the rest of the music being looped over and interspersed with one another by Hart himself. Hart’s musical resemblance to mentor Prince is uncanny, with elements of rock, funk and soulful pop all making their way into the 50-minute long set. Standout track Lovers in Bloom (which was recently classified as a Dutch radio megahit) tore through the full tent as Hart grooved his way across the stage, even playing his guitar behind his head and rolling across the floor towards the end of the set. Darren Hart is a true-born frontman, and you’re gonna have a hard time avoiding his name soon. Irish outfit Walking on Cars may not have the biggest following in Holland, but fans still turned out in droves to witness the County Kerry group. Their music, which is essentially a beefier version of fellow countrymen The Script, did enough to please Landgraaf as the quintet drew a full crowd to Stage 4. The set drew heavily on debut album Everything This Way, although it was earlier track Tick Tock which stood out far and beyond. Do Walking on Cars have what it takes to become huge? Definitely. Will it happen soon? Probably not. But they’ll get there, that’s for sure. A show at the Melkweg has just been announced, and this can only become the start of something special. Once Walking on Cars left the stage, the heavens truly opened and a week’s worth of rain erupted upon Landgraaf. The timing of the rain unfortunately deterred many people from heading down to the 3fm Stage for Vintage Trouble’s spectacular blues rock, with Kent punk duo Slaves following back on Stage 4. The two-piece, consisting of Laure Vincent and Isaac Holman, released the caterwauling Are You Satisfied? last year and have been riding its success ever since. Set opener Ninety Nine instantly hit the full tent in the face with hard-hitting rhythms and menacing riffs, before the likes of fan favourites Cheer Up London, Where’s Your Car Debbie? and Sockets drew a substantial crowd of outside onlookers. By the time early single Hey showed up, it seemed almost as if chaos was about to ensue when a massive pit erupted in the centre of the crowd. Not even two minutes later Vincent put a halt to the show, with one fan having to be stretchered off by paramedics due to a nasty injury. The show was delayed for 15 minutes, with Slaves picking up exactly where they left off before ending the set on a manic rendition of The Hunter. Slaves are certainly a unique duo, with their witty sarcasm intertwining tracks and bringing a little bit of British culture to the stale surroundings of Landgraaf. “You’re already dead and it’s not that bad”, as Holman and Vincent would say. All Time Low followed on the 3fm Stage with a show much better than last year’s Lowlands disappointment, eventually making way for Sheffield hard rock outfit Bring Me the Horizon. The five-piece, who released the career-defining That’s the Spirit last year, had to deal with plenty of rain and doubters as they proved to onlookers that they’re more than just a metal band. Frontman Oli Sykes may slowly be distancing himself from scream-centric music, but that doesn’t mean that he can’t belt a good howl out, something which he demonstrated on older classic Antivist. Although the band put plenty of effort and energy into their set, it still seemed like something was missing. Sure, the band are better suited to the dark indoors, but did the daylight affect their set? Certainly. Sykes had more trouble delivering across his powerful missives, with large chunks of the crowd (save for the diehards) talking amongst themselves between songs. Bring Me the Horizon are the world’s next big festival headliners, but even the biggest and the best need to take their time before they finally make it. Their time will surely come, though. Over on the main stage, Lionel Richie emerged to pull off a set which was nothing short of a greatest hits spectacle. Having performed the renowned legends slot at Glastonbury last year, it was up to Richie to prepare the masses for Paul McCartney a couple of hours later. His show drew heavily from his whole career, one which spans a whole solo back catalogue as well as Commodores classics. One such classic was the lilting Easy, a track which sparked the first huge sing-a-long of the set. Huge moments are what Richie does best, and it’s something which he proved well and truly during the last three songs of the show. Power ballad Hello, dance hit All Night Long and anthemic juggernaut We Are the World formed the show’s curtain call, one which culminated in some 70,000 voices all declaring, “we are the world, we are the children” at the top of their lungs. As if Lionel Richie at Pinkpop was spectacular enough, then try imagining a whole festival site singing along to his classics. Belgian band Balthazar filled the gap between Richie and McCartney over in the Brand Bier tent, headlining the stage during their first ever appearance in Landgraaf. Set highlight Fifteen Floors truly cemented their status as one of Belgium’s biggest musical export, with the band even being cut off towards the end of their set to avoid a sound clash with McCartney. They may not be at the level of festival headliners in Holland, but they’re certainly heading in that direction faster than the speed of light. Taking to the stage twenty minutes late was the legend that is Sir Paul McCartney, not hesitating one bit as he and his band kicked straight into Beatles classic A Hard Day’s Night. “It’s been a hard day’s night, and I’ve been working like a dog” sang the legend, with his two-hour long show spanning a back catalogue which stretches as far back as the early 60s. Alongside Beatles classics like Obla-Di-Obla-Da, Eleanor Rigby, Love Me Do and Lady Madonna were recent Kanye West and Rihanna collaboration FourFiveSeconds, as well as a handful of tracks from his Wings heyday. He may be well into his 70s now, but McCartney still has plenty of youthful stamina within him to captivate a crowd of 70,000 people for over two hours. His live band were just as spectacular as him, only adding to the stunning production value that his show had. From fireworks and pyrotechnics all the way through to c02, rising platforms and lasers, McCartney had it all. There may have been a couple of mid-show dips throughout, but they were instantly erased when main set double-whammy closers Live and Let Die and Hey Jude were pulled out of the bag. Whereas the former encompassed all of Paul’s fantastic production elements for three thrilling minutes, the latter relied on the audience to carry the song towards a magnificent end which everyone sung along to louder than anything in Pinkpop history. Jan Smeets has previously declared McCartney as a dream headliner, and he certainly wasn’t wrong. Paul McCartney’s set may well go down as the best headline set in Pinkpop history. As he left the stage, the festival’s traditional fireworks display (ironically to the sound of All You Need is Love) took place and some 70,000 rain and mud-drenched revellers of all ages descended towards the exits for one last time as Pinkpop 2016 finally came to a close. Although it’ll be hard to beat 2014’s fantastic line-up, this year certainly did a bloody good job in putting Pinkpop back on the map once more following a slightly more disappointing 2015. Rumours are rife that Pearl Jam, Foo Fighters and Radiohead will hit up Landgraaf next year, which only sets the expectations even higher for Smeets and his organizing team to live up to.