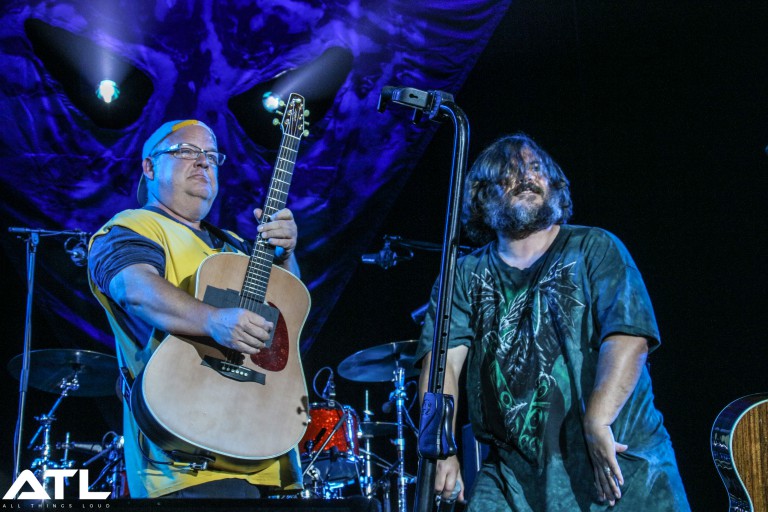 Following months of announcements and anticipation, Rock am Ring’s second edition at their new home in Mendig has finally kicked off. Having made the bold move to leave the famous Nurburgring two years ago, the German festival seems to have finally settled in at its new home. With a line-up that boasts Black Sabbath, Red Hot Chili Peppers and today’s opener Volbeat as headliners, day one proved that Rock am Ring still knows how to put on one hell of party whatever the weather. We’ve travelled across to Mendig to bring you full, uninterrupted, band-by-band coverage of Rock am Ring this year.

WE CAME AS ROMANS
Metalcore outfit We Came as Romans had the honour of opening the whole festival, one which pulls some 92,000 revellers. The Michigan sextet are currently touring in promotion of their new, self-titled record which came out towards the end of last summer. Performing first at Rock am Ring will forever be a challenge for each and every band who takes to the Mendig stage in coming years, something which is simply down to the ‘early’ starting time. German fans like to take their time, something which became increasingly notable once We Came as Romans took to the stage. Despite the front section being packed to the rafters, the rest of the crowd was rather sparse. That it started raining heavily almost instantly didn’t help, yet nothing stopped the band from going wild. Co-frontman Kyle Pavone launched his way into the crowd early on, spread-eagling himself above the masses as the band’s set slowly came towards a crushing end. OF MICE & MEN
Metalcore quintet Of Mice & Men have a long and successful history with Germany. The Austin Carlile-fronted group, who are set to release a new album this year, took to the stage in front of 25,000 rain soaked German fans as they kicked straight into Bones Exposed and its pummelling metalcore fury. The set, which drew heavily from 2014’s Restoring Force, is just one of the many examples as to why Of Mice & Men are an absolute force to be reckoned with. Nu-metal cut Feels Like Forever and the brutal Public Service Announcement continued in a stream of unforgettable chaos, with Carlile ordering a continuous stream of circle pits and crowdsurfers. There may not have been many of the latter, but that didn’t make much difference when you’ve got such a massive crowd of Germans going absolutely mental. Of Mice & Men are the future of a new rock generation. WALKING ON CARS
Irish outfit Walking on Cars may not have the biggest or most renowned following at Rock am Ring, but fans still turned out in droves to witness the County Kerry group. Their music, which is essentially a beefier version of fellow countrymen The Script, did enough to please Mendig as some 15,000 people turned out for the short set. The set drew heavily on debut album Everything This Way, although it was earlier track Tick Tock which stood out far and beyond. Do Walking on Cars have what it takes to become huge? Definitely. Will it happen soon? Probably not. But they’ll get there, that’s for sure. CANE HILL
Brutal rockers Cane Hill performed in front of an extremely sparsely filled Alternatent, with their set consisting of a barrage of manic breakdowns, cataclysmic percussion and enough headbanging to break the necks of six million. Set highlight Sunday School demonstrated the band’s ability to rock just as hard as they could whilst still paving the way for a huge future. BREAKING BENJAMIN
Following the brief hospitalization of lead guitarist Jasen Rauch in Amsterdam last week, Breaking Benjamin finally made their long-awaited return to the German stage in Mendig. Frontman Benjamin Burley apologized for their eight-year absence, blaming it on his well-known fear of flying. “We got over here by taking a fucking boat! We were travelling for nine days to come out to Europe, and we even encountered two days of constant sea sickness” were his words as the emphatic crowd cheered him on. Since reforming in 2014, the band have only gone from strength to strength, releasing the powerful Dark Before Dawn last year. Their set in Mendig encompassed tracks from this record, as well as their extensive back catalogue. Classic track The Diary of Jane closed the show, with the band promising to return soon following what was an extremely well-received set. WHILE SHE SLEEPS
Sheffield’s finest, While She Sleeps, yesterday returned to Mendig to make up for the fact their set last year was cut extremely short. Playing the same tent at roughly the same time slot, it seemed like a perfect rematch for a band with nothing to lose. Frontman Loz Taylor was at his chaotic best once more, energetically bounding about the stage as the band pulled off tracks from 2015’s Brainwashed. Set highlight Four Walls saw Taylor declare, “everybody dies when they’re dead!” at the top of his lungs, inciting crowd chaos from the word go. The band even took out time to chug Jagermeister shots onstage whilst crowdsurfers launched themselves over the barrier much like water breaking a dam. Security couldn’t handle it, but While She Sleeps certainly lapped it up. And quite rightly so, because these Sheffield lads are the future of metalcore. DISTURBED
Chicago’s Disturbed are currently on a victory lap in honour of recent album Immortalized, a record which has even seen their rendition of The Sound of Silence break the Top 40 in various regions. For a hard rock band, this is no mean feat. The David Draiman-fronted quartet spent their hour-long set in Mendig performing tracks from throughout their vastly extensive back catalogue, with a cover medley featuring Rage Against the Machine, U2 and The Who also popping up towards the end. Standout hit and classic track Down With the Sickness predictably brought the show to an end, one which was filled with gnarly vocals, pummelling percussion and some downright dirty rhythms. PUSCIFER
Who are Puscifer, and why are they programmed so high up the bill at every festival they’re doing this summer? On the surface it may seem like an odd booking, however it’s taken some time for people to realize that Puscifer’s wrestling mask-clad frontman is Maynard James Keenan (Tool, A Perfect Circle). Their early evening set in Mendig opened with an extended video monologue exposing societal flaws, before the band (all but two of which wore wrestling masks) kicked into Simultaneous. Onstage, Keenan is accompanied in his little boxing ring by Carina Round as their vocals intertwine seamlessly. It may take a while to get accustomed to Puscifer’s way of working (minimalistic obscurity paired with hints of flamboyance), but once you understand the core principles behind Keenan and co. it can actually become a pretty fun experience. TENACIOUS D
Tenacious D’s big return to the European stage looked set to be an absolutely massive event, however things took a turn for the worse when an impending thunder storm postponed their set by two hours. Kyle Glass, Jack Black and their three band members were all ready to kick off the show, with intro track O Fortuna even blasting through the PA moments before everyone was rushed offstage. As the thunderstorm ravaged Mendig, it wasn’t even sure if the band would continue on with their set. But, just like all good heroes, the band returned two hours later for a shortened set which encompassed everything fun about Tenacious D. “Tenacious D bring the thunda” declared Black jokingly following show opener Kickapoo, before the likes of fan favourite Master Exploder (“this one is especially for you, Germany!”) and standout track Tribute treated the German fans to a show which, despite the circumstances, was nothing short of spectacular. VOLBEAT
The case of Volbeat can be quite a confusing one. In Germany and homeland Denmark they’re absolutely massive, yet the rest of the world probably wouldn’t even take notice if the dad rockers took to a stage nearby. Sure, they might have plenty of exciting tricks up their sleeves, but it’s hardly a unique group is it? Their headline set on the Seat Volcano Stage last night showed the world exactly why the band are loved by many, with their stage production consisting of plenty of corrugated metal, huge hanging chains and an overall industrial vibe which perfectly complements their fury-infused dad rock. New tracks like For Evigt and The Devil’s Bleeding Crown seemed to fit in seamlessly alongside older cuts like The Mirror and the Ripper and Doc Holiday. Will new album Seal the Deal, Let’s Boogie see Volbeat finally head a step closer towards world domination? Who knows. It’s definitely looking good, though. THE 1975
Indie rock outfit The 1975 had the hard task of clashing with headliners Volbeat, a band who are absolutely huge in Germany. Luckily for Matt Healy and co., though, they still managed to draw a huge crowd of dedicated fans to the Beck’s Crater Stage. The fact that their set was delayed thanks to the earlier thunder storm definitely played in the band’s advantage, as their live show definitely came to life in the dark. A cityscape scenery comprised of various screens backed up the band, with the 50-minute long set encompassing tracks from their new album I Like it When You Sleep For You Are So Beautiful Yet So Unaware Of It as well as their self-titled debut. Show opener Love Me brought the funky rhythms, with classic tracks Sex and Chocolate helping the show reach its end. Whether you love them or hate them, The 1975 definitely pull off one hell of a captivating show. MAJOR LAZER
Who do you book when you need to bring Rock am Ring’s first day to a stupendously energetic close? Major Lazer, of course. If you forget the fact that Rudimental followed them up in the graveyard slot, then Diplo and co. definitely did the job in bringing the party to Mendig. The show, which essentially was all over the place and somewhat chaotic, saw a troupe of dancers initially take to the stage as Diplo, Jillionaire and Walshy Fire paraded between their DJ decks and the crowd. When not mixing in some of their biggest hits, amongst them set closer Lean On, the trio chucked shirts and flags into the crowd as a barrage of confetti and c02 erupted into the air. Sure, Major Lazer aren’t the most innovative group out there, but if you look at it from a certain context then you’ve definitely got a winning formula on your hands. They’ve got the songs, they’ve got the production and they’ve got the summer vibes which everyone craves so badly. What more do you want to watch when you’re drunk in your wellies slipping in the mud? Exactly, Major Lazer. All Things Loud is bringing you full coverage of Rock am Ring this year through all our social channels. Follow us on Instagram here, and add us on Snapchat as allthingsloud for all the latest updates. All pictures by Natasja de Vries (Anchor Focus Photography) and Jack Parker.