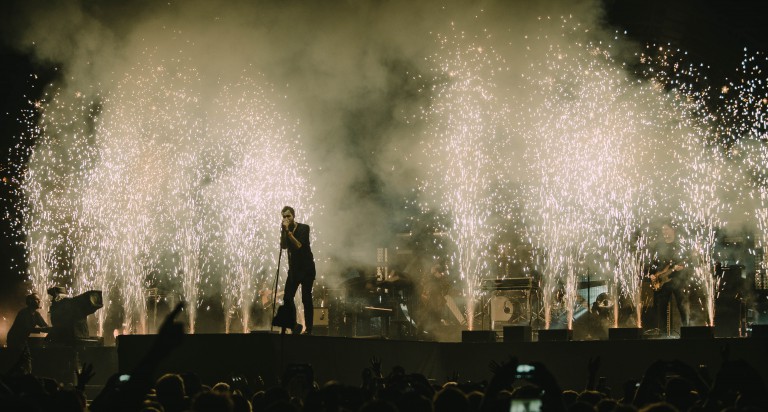 The second day of Lowlands may not have been as jam-packed with megastars and stunning shows as the first day, but it certainly still proved to be just as much of a hit for the 55,000 visitors onsite. The likes of Editors, Alt-J and Elbow ensured that tents filled themselves effortlessly as crowds enjoyed themselves relentlessly. Having said that, though, it ought to be admitted that the best performances of the day came from those lower down on the billing, including Black Foxxes and Husky Loops. Jack Parker and Sebastien Gamez trapsed around the festival site to bring you Saturday’s best.

Hauschka kicks off the Saturday program of Lowlands 2017 with his absolutely brilliant, vivid and encapsulating contemporary classic piano compositions. Working with a reprogrammed piano (one whose sound has been modified by adding various objects on the inside of the piano, creating percussive tones alongside the regular piano notes) as well as analogue synthesis equipment, Hauschka creates hypnotizing contemporary classic compositions very reminiscent of the likes of John Cage and Max Richter. His hour-long composition created an intense soundtrack which moved the crowd from intensely depressive emotions to moments of pure bliss. A fair way to describe his set at Lowlands was an intimate, emotional rollercoaster taking you on a ride in both the past and the future of classical music.

The Mickey Smith-helmed project A Blaze of Feather attracted a relatively large crowd to the Heineken stage, something which seems largely down to the fact Dutch favourite Ben Howard makes out a part of his live band. Howard chose to sit right at the back of the stage cloaked in smoke, allowing the attention to be shifted in Smith’s direction. And quite rightly so, because A Blaze of Feather’s sickly sweet indie folk proved to be a hit with visitors. Operating in a similar vein to the aforementioned were London indie outfit Palace, whose irresistible vocal tones and gritty rhythms added an extra edge which A Blaze of Feather most certainly lacked. Their set stood out on a day filled with big moments, most courtesy of the most unsuspecting shows. Take Husky Loops as an example. The three-piece Italian band from London perfectly blend elements of psychedelia, indie, post-punk and noise alongside some old-school hip hop sampling techniques, all of which ultimately create a sound that is almost impossible not to dance to. In terms of pace, the band jumps right in, starting with a repeated vocal sample looped to a cripsy drum beat. Not long after, the chilling guitar riffs come in, and they sound drone-like as though they’re coming straight from heaven. The basslines fully envelop you and it almost feels like they order your feet to move to their rhythm. A lively band interacting heavily with the crowd as each song comes to an end – Husky Loops is sure to be one of the highlights of this Saturday at Lowlands 2017. Electro pop vocalist Tove Lo pulled a large crowd to the Bravo tent for her set, which saw her do exactly what she does best as she sultrily careered around stage whilst her soaring voice echoed through the tent. The vocal energy presented by Tove Lo couldn’t be further away from the sonic violence occurring on the India stage, where British trio Black Foxxes absolutely tore the house down. Taking to the stage calmly, Mark Holley and co. went through a majority of debut album I’m Not Well as they gave the relatively busy tent something to mosh to. It may have been a challenge for the band, who haven’t received much attention on Dutch soil, but it was definitely one that they overcame effortlessly. Most will know Sampha for his excellent, soulful work with artists like SBTRKT, Frank Ocean and even Drake. However, his show at Lowlands (on the Heineken stage) focused primarily on his own work. With his debut album out this year – Process – Sampha really focused on his own artistry at his Lowlands set and really established himself as a standalone soul singer full of intriguing ideas. Strong emotions were felt during his rather intimate set in a practically full Heineken tent. As the crowd felt transported into the own personal word of Sampha, he left them wanting more and more as each track beautifully came to an end. The Shins followed on the same stage, however their set bordered on the dull after a surprisingly upbeat and good start. Bastille filled the generic pop band quota over on the Alpha stage, with new studio album Wild World represented heavily alongside Dan Smith and co.’s successful debut album. There’s nothing special about the band, who dropped big hit Laura Palmer early on, however they certainly possess the ability to keep a crowd in the palm of their hands for longer than the average human attention span. Italian project The Bloody Beetroots managed similar successes in front of a packed Heineken crowd, leaving no stone unturned in their pursuit of absolute crowd madness. Set opener My Name is Thunder set the tone instantly, with a barrage of filthy techno beats and gritty guitars intertwining to create the musical equivalent of an atomic bomb. If there’s one thing that The Bloody Beetroots weren’t, then it was on a similar wavelength to alt-J, whose melancholic and introverted indietronica took the Alpha stage by storm. New album RELAXER may not match up entirely to their preceding records, but it certainly enabled Joe Newman and co. to take themselves down a new sonic path and expand their creative capabilities. Set opener 3WW demonstrated this with its low-key sound, ultimately characterized by Newman’s recognizable voice. The rest of the set made for an alt-J by-numbers show, ultimately climaxing on the hugely popular Breezeblocks. Frank Carter and his band The Rattlesnakes took no prisoners over on the India stage, making up for their cancellation in 2016 with a set which saw Carter in the crowd more than he was on the stage. Dad rockers Elbow subsequently took to the Bravo stage, bringing with them elegance and beauty by means of their eloquent compositions and Guy Garvey’s booming voice. He joked that the new Bravo tent was big enough to fit his ego, however he came across so light-hearted and sweet that you wouldn’t have even noticed an ego in the slightest. It was up to Editors to top the bill on Lowlands’ second day, and they did so with the utmost prowess, nothing less than what we’ve come to expect from a band whose popularity on Dutch ground seems to be boundless. Frontman Tom Smith is, as per usual, an absolute force to be reckoned with. New tracks Cold, Magazine and Hallelujah all featured throughout, sounding absolutely massive and promising for whatever the band have to offer next. They slotted in nicely alongside the fan favourites, amongst them early hit Eat Raw Meat = Blood Drool and The Racing Rats, the latter of which saw sparks descend onto the stage in true pompous fashion. Show closer Papillon reintroduced Editors’ love of pyrotechnics, with fire erupting out of the ground one last time as Smith and co. cemented their reputation as formidable live act, subsequently ending Lowlands’ second day in style.