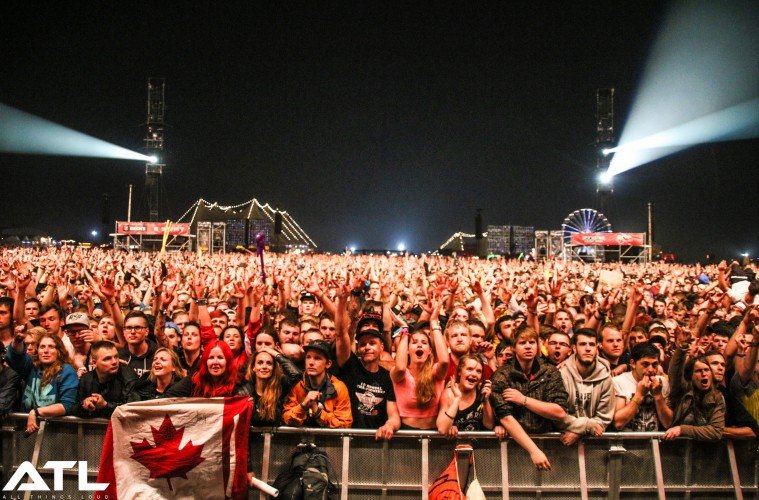 Festival Report: Thunder and Lightning Spells the End for Rock am Ring 2016

Disaster struck in Mendig as extreme weather conditions ensured that Rock am Ring was called off for the first time in its 31 year history. Taking place at Flugplatz Mendig for the second consecutive year, the massive weekender experienced conditions so severe that over 90 festivalgoers were hospitalized due to lightning strikes. The first day of the festival was delayed by two hours due to oncoming weather, with the second (and now final) day not even kicking off till 9pm. Once it did kick off, though, the line-up was reduced to seven main acts across the two main stages. Deftones were one of the seven lucky acts still permitted to perform in front of Mendig’s masses, presenting a packed Seat Volcano Stage crowd with cuts from new album Gore. The record, one of the band’s finest, encompasses dark riffs, haunting rhythms and frontman Chino Moreno’s piercing vocals in an effortlessly captivating final product. Opening the set on a monstrous Rocket Skates, it instantly became clear that Moreno and co. only had one aim: to destruct everything in their paths. Having waited some three hours to finally take to the stage, you could definitely notice a sense of destructive energy in Moreno’s eyes as he bounded around the stage. The band’s hour-long set luckily avoided all sign of emergency weather, enabling the festival to continue on as it should’ve done in the first place. Set closer Engine No. 9 incorporated Cypress Hill’s How I Could Just Kill a Man into its chorus, enabling Deftones’ rescheduled set to reach a deservedly chaotic ending. At the same time, Killswitch Engage performed over on the Beck’s Crater Stage in front of a sparsely spread out crowd. The Massachusetts metalcore outfit are currently touring in support of March’s Incarnate, opening on album highlight Strength of Mind. The show, which simply consisted of simple and to-the-point metalcore was another reminder that Killswitch Engage are a brute force to be reckoned with even if the recorded output does sound very basic. Not everything needs to be intricate to be exciting, something which Killswitch Engage proved in Mendig. Red Hot Chili Peppers still managed to perform a full headline set in Mendig, even if they had now been swapped around with Billy Talent in order to keep the time schedule sufficiently effective for all artists. With new album The Getaway due at the end of next week, it was up to Anthony Kiedis and co. to pull off a set which was equal parts new music as it was a greatest hits set. In the end, it was the latter which prevailed as the band opened on a double-whammy of Can’t Stop and Dani California. Despite being hospitalized two weeks back, frontman Kiedis was right back to his old self onstage as he energetically bounded around the stage whilst interacting plenty with fellow band members Flea, Josh Klinghoffer and Chad Smith. Snow ((Hey Oh)). The quartet performed just one song from 2011’s I’m With You – the funky Ethiopia – as they opted to instead pull crowd pleasing anthems out of the bag. New singles Dark Necessities and The Getaway, both catchy slow jam’s, featured in and amongst the likes of ultra-hits Californication, Under the Bridge and staple show closer Give It Away. Despite having experienced a live dip some years back (constant drunken jam interludes being a main example), Red Hot Chili Peppers seem to finally back at their best level. The live performance is tight, the energy is back and the new music seems to fit in just like any old classic. Back on the Beck’s Crater Stage, Welsh hard rock titans Bullet for My Valentine still managed to headline in front of a surprisingly full field, presenting las year’s Venom to the dedicated Mendig masses. The barrier was packed well in advance with people from all walks of life, including just as many hipsters as there were long-haired emo’s. Set opener No Way Out instantly set the tone, featuring a barrage of pyrotechnics and smoke as the Bridgend crew tore through an hour’s worth of top-class metalcore. Popular single You Want a Battle? (Here’s a War) saw the band greeted with the night’s first big sing-a-long moment, before set closer Waking the Demon ensured that Bullet for My Valentine would still stand out amongst all the chaos that Saturday was presented with. Billy Talent were the final big act to hit Mendig on Saturday, ultimately becoming the closing spectacle of the whole festival. New album Afraid of Heights is due in July, with the band performing three of its cuts in front of some 80,000 festivalgoers. For those unaware, Billy Talent are absolutely huge in Germany, having been handed a 90-minute slot and enough room for a massive stage production which resembles Afraid of Height’s artwork. Taking to the stage at 1:15am, the band kicked straight into new track Big Red Gun. Although comeback single Afraid of Heights sounded like a band toning themselves down, Big Red Gun proved that this was further of the truth. A barrage of guitars, pounding percussion and an absolutely possessed Ben Kowalewicz all combined to create an unbridled force of nature which almost caused Mendig to encounter an earthquake. Limbs and bodies flew all over the crowd as pits erupted and crowdsurfers descended upon security guards, causing all sorts of havoc. Not that this was too much of a problem though, because havoc is something which Billy Talent thrive on regardless of how many people stand in front of them. Whether it be a 1500-capacity club or 80,000 diehard fans at a festival, Billy Talent sure know how to put on a show. Standout tracks Red Flag and Fallen Leaves both appeared later on in the set, before the destructively punky Viking Death March signalled the end for not just Billy Talent’s show, but also for Rock am Ring in general. Save for The BossHoss’ catchy country rock stage over on the Crater Stage, Rock am Ring was over. There was just one issue though: nobody was aware yet as the announcement was made at the height of Billy Talent’s show. Following the announcement after all music had ended, festival founder Marek Lieberberg declared that it was the first time Rock am Ring had ever been put to a halt in its 31-year history. The decision was ultimately made by local governors, who revoked the festival’s permission to host a final day in the event of extreme weather conditions. It ironically stayed dry on the Sunday, however it was already too late as most revellers had already headed homewards through the night and during Sunday. The final day was set to feature the likes of Black Sabbath, Biffy Clyro, Bring Me the Horizon and Korn atop the bill, with Lonely the Brave and Beach Slang’s sets also having been hotly anticipated. This is now the second year that Rock am Ring has fallen victim to thunder strikes and bad weather in Mendig, posing one important question: should the festival return to Mendig next year? A resounding ‘no’ would be the answer of most festivalgoers, with the organization currently trying to find its way out of a five-year long contract with Flugplatz Mendig. Whether or not the festival will return to its long-standing spiritual home in the Nurburgring remains to be seen, however visitors can definitely be reassured by the fact that Rock am Ring will return defiant in 2017. As Marek Lieberberg said ahead of Deftones’ set: “let’s dance and keep on rocking!”