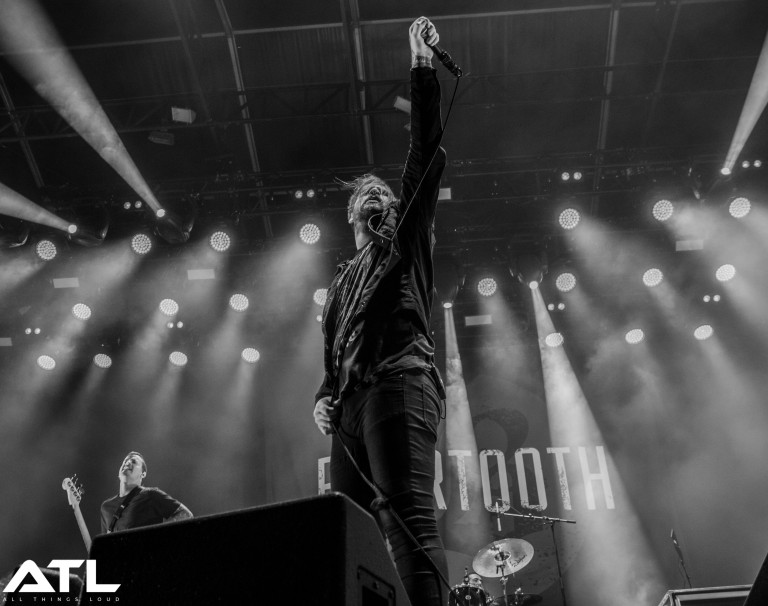 “Keep on rockin’ in the free world”. Regardless of your background, anyone with a solid interest in music will be aware of this line and must have used it tons of time in their life. Yesterday, it looked to be the motto of 80,000 German festivalgoers as the second day of Rock am Ring went ahead without a single hitch following Friday’s terror threat. German heroes Die Toten Hosen topped the bill, with Broilers returning to finish off their interrupted Friday set alongside a largely local main stage which also featured international exports Sum 41 and Lower than Atlantis. However, it was lower down the bill where the real highlights were found, and that’s something which proves Rock am Ring’s ability to provide a line-up which ticks all the boxes. UK outfit Lower than Atlantis kicked off proceedings on the main stage with a short-but-sharp alt-punk set which pulled a pretty decent crowd for a band at this early hour. Frontman Mike Duce knows how to work a crowd, and he did so to his best ability as he and his bandmates powered through a set which leant heavily towards latest studio album Safe and Sound. Set highlight Had Enough saw the crowd bounce along with Duce and co., who hope to make a dent in Germany off the back of this weekend’s sets at Rock am Ring and Rock im Park. Irish outfit Greywind followed not too long after on the Alternastage, with their brooding indie rock-meets-pop noir proving a treat for the small crowd who gathered to witness siblings Paul and Steph O’Sullivan. Steph has one hell of a voice, so don’t be too surprised if you hear and see more of Greywind in the near future. The same applies for Birmingham’s SHVPES, whose eclectically visceral metalcore is just as much a punch in the gut as it is a cry for victory. Frontman Griffin Dickinson is one hell of vocalist, and his way of commandeering the crowd is second to none. The next big thing, anyone?

One band who don’t have to worry about impressing the crowd are Deryck Whibley’s men in Sum 41, whose career boasts such longevity that they don’t actually need an introduction anymore. New album 13 Voices is a return to form for the Canadians, so it should come as no surprise that their main stage set drew heavily from it. With the Ring crowd stretching back as far as the eye can see, Sum 41 pulled off a show which lived up to all the general expectations you have of their show: hits, riffs and pits. Need we say more? Over on the Crater Stage, rapper Machine Gun Kelly injected a much-needed sense of anarchy into a genre which is in danger of becoming staler by the day. Third album Bloom is a breath of fresh air, with MGK himself pulling a pretty large crowd as he pulled the hits out of the bag. Dressed in all yellow, the rapper bounded energetically around the stage as he left absolutely no prisoners. Next time you catch wind of this bloke, it’ll be on a stage twice as big in front a crowd even bigger.

Motionless in White had the honour of kicking off a packed metal evening on the Alternastage, bringing new album Graveyard Shift to life by means of a blisteringly brutal live show. Frontman Chris Motionless commands the stage like the pro he is, not standing still for more than three seconds at a time. Early highlight Eternally Yours injected some rare heartfelt emotion into the set, with older cut Reincarnate demonstrating exactly what Motionless in White do best: flip shit and give not one fuck. If only the meagre Suicide Silence could take note of that. The real highlight of the night came in the form of an absolutely destructive Beartooth, whose live show only seems to get heavier by the day. Frontman Caleb Shomo is a maniac in his own right, so it should come as little surprise that his project’s new record goes under the moniker Aggressive. That’s exactly what Beartooth is, and that’s exactly what they showed a packed Alternastage crowd last night.

Pierce the Veil followed an hour and a half later, with Sleeping With Sirens pulling out due to food poisoning. It’s a shame that Pierce the Veil encountered the unfortunate weather conditions they performed during, because it ensured that no more than 100 people showed up to watch a band who easily pull ten times that amount when it isn’t raining. Set opener Texas is Forever set the scene for a wet and windy affair, one which featured Caleb Shomo at one point, and ended on a rowdy rendition of King For a Day. Had Vic Fuentes and co. appeared earlier, you could’ve almost guaranteed a packed crowd. Here’s hoping that they have better luck next time.

Rock am Ring concludes today with sets by System of a Down, Alter Bridge and Gojira. You can find more shots from yesterday below, and extra will be added throughout today.