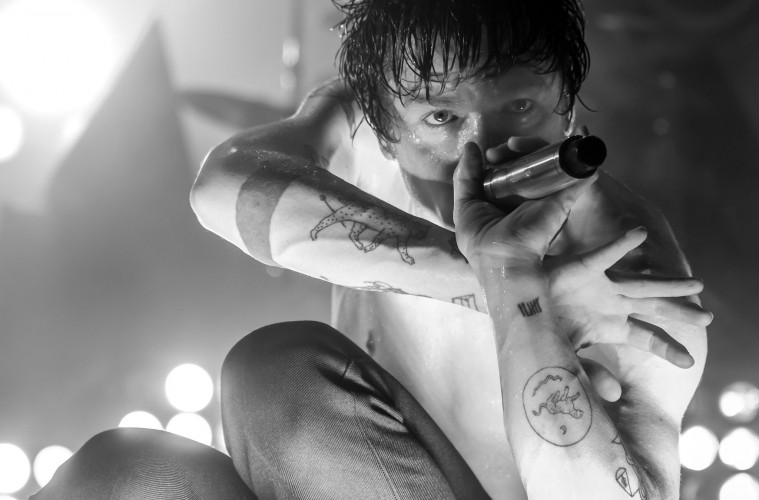 The annual two-day music festival FPSF (Free Press Summer Festival) took place at Eleanor Tinsley Park in Houston, Texas on June 3rd and 4th. The location is beautiful, with lush grassy areas, fountains, and Houston skyscrapers as the backdrop. The layout of the stages is very convenient, with Mercury, Saturn and Neptune close to each other allowing fans to catch more shows, and the main stage, Budweiser, located on the far west side. There are plenty of food and drink options as you walk between the stages as well as lockers and several water filling stations located throughout the festival grounds. This is the 9th year for the festival and the last four years were affected by weather, which was also the case this year. Festivalgoers watched the forecast leading up the festival which bounced between 20% to 90% rain on Saturday and Sunday. As the festival got closer, it was clear it was going to rain, it was just a matter of how much.

Saturday started out sunny, with strong performances by Camera Cult, Mod Sun, Kay Weathers, Hurray For The Riff Raff, The Struts, Vanic, and Trill Sammy. Rain started to move into the area while Frightened Rabbit was performing. Umbrellas were not allowed in the festival so fans had several options: take cover under several large overpasses, watch the shows in a protective poncho, or just embrace and accept the rain, which a lot of fans did while dancing in the heavy downpour during the Cashemere Cat set. Unfortunately thunderstorms entered the area and the festival was evacuated around 6:00 PM. Most fans took shelter in nearby restaurants and parking garages. There was some confusion with the security staff who said the festival was canceled and to return home. Most fans did not listen to security and instead relied on social media for updates. Around 8:00 PM FPSF announced the festival would continue and fans were able to return to the festival grounds, causing a contained, but steady, stream of fans to run back to claim their spots at the various stages. The festival continued with energetic performances by DVBBS, Post Malone, Grouplove, Milky Chance, Carnage, G-Eazy, and Cage The Elephant. Matt Shultz, lead singer of Cage the Elephant, was all over the stage and delighted fans by crowd surfing at the end of the set. It rained early on Sunday but cleared up by the time the festival opened at 11:00 AM. Some areas, especially the Mercury and Budweiser stages, were pretty muddy and slick due to the rain on Saturday and Sunday mornings. Bands were able to play in the morning through the early afternoon, including MIEARS, The Wheel Workers, Stick Figure, Cherry Glazerr, and Bad Suns. However, another strong thunderstorm moved into the area at this point and the festival grounds were evacuated around 2:30 PM. It was the same routine – people left the festival grounds and took cover in restaurants, parking garages, or their cars. Everyone assumed it would be a repeat of Saturday: evacuate, wait for a few hours, and then return to the festival. The lightning moved out of the area but unfortunately the rain flooded parts of the festival and it was determined to be unsafe to continue, and the festival was officially canceled around 6:30 PM. The headliners Flume and Lorde, along with other acts, were not able to perform on Sunday. Some of the bands tried to make the best of the situation; Portugal. the Man, Amine, and Deep Cuts performed free shows at White Oak Music Hall for FPSF festivalgoers, and Jai Wolf, Jauz, and Party Favor held free show at Stereo Live. FPSF is providing a 50% refund for two-day passes and a full refund for tickets purchased on Sunday, June 4th. You can click here for more information. It’s a risk having a multi-day outside music festival in Houston in early June, but the beautiful location makes the risk worth taking, let’s hope the rain, or at least the lightning, holds off next year.

Find more shots from the festival below, all by Ralph Arvesen.