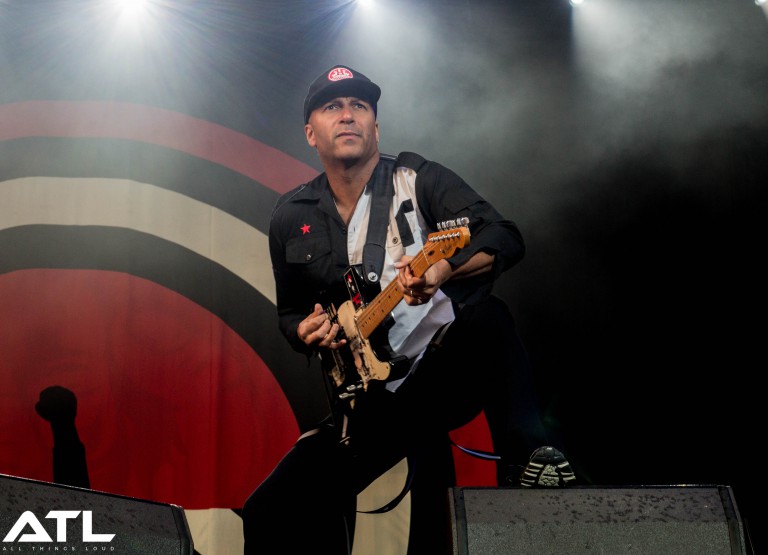 As the hours passed in Nurnburg last weekend, it seemed as though Rock am Ring’s expansive and diverse line-up still had a hell of a lot to do to prove its worth. Friday had its own troubles, featuring a mixed bag of genres across the whole timetable, with Saturday largely consisting of homegrown German talent. One sneak of the Sunday line-up will tell you that Rock am Ring’s final day revolves around one thing in particular: guitars. The so-called hard rock day featured big hitters System of a Down and Prophets of Rage, both of whom brought the festival to a spectacular end. First, though, it was up to hardcore vocalist Frank Carter and his band The Rattlesnakes to set a sparsely filled Crater Stage on fire. And by god did they do that, with Carter launching himself into the middle of a circle pit not too soon after he emerged onstage in his sharp suit. New album Modern Ruin presents the world with a tamer, more introverted side to Carter, although that element to his personality is completely pulverized once he stands in front of a crowd, regardless of its size. Kent duo Slaves followed Carter, suffering a similar crowd fate as they performed tracks from their well-received sophomore album Take Control, which came out last year. Vocalist Isaac Holman and guitarist Laurie Vincent both connect well with one another, using their cheeky banter to involve the crowd on a personal wavelength. The crowd, as with many sets this weekend, may have been sparse, but it didn’t deter Holman and Vincent from pulling another classic Slaves set out of the bag.

French metallers Gojira had a tough time pulling a decent crowd to their Volcano Stage set, which was a shame considering the sheer force of nature which this band is. Aussie metal freaks Airbourne, on the other hand, had very little trouble pulling a crowd as their AC/DC-lite party metal set the Ring on fire with effortless ease. Frontman Joel O’Keeffe is a born and bred legend, with his onstage (and offstage!) antics proving second-to-none. Airbourne may well be the next rock superstars, giving the genre a much-needed kick up the arse. The same sense of necessity looks to have been well and truly catered for by Myles Kennedy and his men in Alter Bridge, who minimally supported new album The Last Hero with a blistering Volcano Stage set. The quartet only performed two tracks from said album, including the epic Show Me a Leader. Fan favourites Metalingus and Blackbird unsurprisingly featured, with the relatively packed Ring responding by the masses.

As the festival approached an end, it was up to supergroup Prophets of Rage to appease the German crowd with a set nothing short of intense. The collective is made up out of Rage Against the Machine’s Tom Morello, Tim Crommerford and Brad Wilk, as well as Public Enemy’s DJ Lord and Chuck D, and Cypress Hill’s B-Real. The band took to the stage with their fists raised aloft, kicking off with lead single Prophets of Rage, complete with its swaggering rhythms, D and B-Real’s playful and witty lyrics and Morello’s signature guitar tones. Morello brandished a guitar which read ‘FUCK TRUMP’ in the largest writing possible, grinning alongside B-Real ahead of follow-up track Testify. It was the first of nine Rage Against the Machine tracks which the band pulled off, closing the whole set on a destructive Killing in the Name. Prophets of Rage are a band for the people, and a band who this world needs so crucially.

The Serj Tankian-fronted System of a Down topped the bill on the Volcano Stage, signalling the end of Rock am Ring’s ultimately successful 2017 edition (alongside a show-stopping performance by Macklemore over on the Crater Stage). Taking to the stage just before 10:30pm, the crossover metallers kicked off the set on a mash-up of Soldier Side’s intro and the oddball Suite-Pee. Frontman Tankian remained as nonchalant as ever for the duration, even when their music reached borderline mental. The pulsating Violent Pornography featured early on, with the 31-song set further touching upon fan favourites such as Radio/Video, Hypnotize, set closer Sugar and standout hit Chop Suey. Once Sugar died down through the Volcano Stage’s vast sound system, it became clear that Rock am Ring had come to an end once again. Regardless of the direction in which the festival looks set to head in 2018, it can be expected that the line-up will once more be better than ever, having had to make do with a smaller 2017 budget to recuperate the losses incurred following 2016’s suspended edition. Even if the whole world goes up in flames, Rock am Ring will always be there to show the world that Rock’n’Roll never dies.

Rock am Ring will return in 2018. Check out a selection of shots from the final festival day (4 June) below.