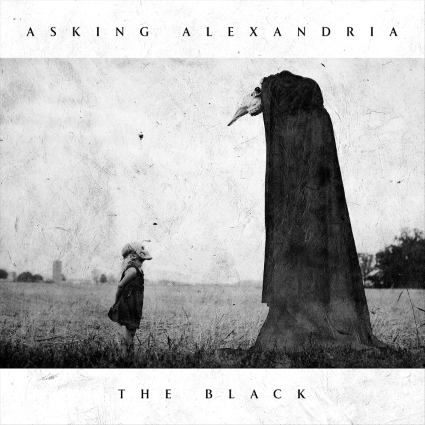 Asking Alexandria could have gone in two completely opposite directions at the beginning of 2015. When former frontman Danny Worsnop walked out on his band in January, fans were left in bewilderment as they tried to put together the pieces of a puzzle which had been crippling for a good couple of years. Were the band going to split up for good, or were they going to persevere and continue with a replacement? Following some patience and regrouping, the band took the latter option and employed Ukrainian-born vocalist Denis Stoff as Wornsop’s replacement. He instantly made a mark when the band released comeback track I Won’t Give In, before fronting the band across America on the notorious Vans Warped Tour. Now, nine months following Worsnop’s departure, Asking Alexandria’s new formation have put out the first studio album featuring Stoff – The Black. We’ve taken a detailed listen to the record, recorded in Michigan with Joey Sturgis, having gathered our thoughts in a coherent track-by-track summary.

LET IT SLEEP
As metalcore records go, Let it Sleep is one hell of a powerful opener. Having been released a couple of weeks ago, the track sees Stoff and co. take elements of Asking’s rich past and put them to the test with a new frontman. From his guttural growls and shrieks all the way through to a catchy chorus, Let it Sleep may well be Asking Alexandria’s most noteworthy track to date. As with most songs on the record, Let it Sleep tackles Worsnop’s departure head-on as lyricist/guitarist Ben Bruce cloaks it in metaphors of personal change and departure. In a press release, Bruce stated that he wanted The Black to be a record which utilized all of the best elements from his band’s past. He was right, because Let it Sleep is Asking Alexandria back at their brutally anthemic best.

THE BLACK
Title track The Black adds a similar, brutal dimension to the album which had slowly but surely been missing from the band’s music in recent years. Just as with the album opener, Stoff does his best to demonstrate his insane vocal range, flittering between low growls and falsetto wails in the first verse alone. “I need to cut you out” repeats the frontman during the pre-chorus, before electronics-laden vocal chops form the most important of The Black’s stadium-ready chorus. “I feel crucified and hung out to dry” declares Stoff, his bold musings underpinned by vicious guitar stabs courtesy of Bruce and fellow guitarist Cameron Liddell. During a demure mid-section, Bruce adds some personal views on the Worsnop situation to the frame, before allowing for Stoff to take the helm in a grandiose manner. As the song comes to an end by means of a haunting piano line, it’s extremely evident that Asking Alexandria are already back at their best.

I WON’T GIVE IN
Stoff’s first track with Asking Alexandria, I Won’t Give In, makes for the third consecutive track on the album which was pre-released to the public. This one dates back to spring 2015, slowing the pace down significantly in comparison with the previous metalcore bangers. I Won’t Give In was supposed to be Stoff’s defiant opening statement, and it still sounds as fresh as ever in March 2016. It follows a more generic soundscape (in comparison to other bands in the scene today), yet this doesn’t make the track sound any less than what we’re used to from Asking Alexandria. Sure, it’s not got 00000-breakdowns or murderous riffs; rather, it bears the fighting spirit which Ben Bruce has firmly dedicated himself to since Worsnop’s departure. “I’ll be your light in the darkness” chant the whole band towards the end of the song, fully pushing themselves into the forefront of a mission statement they’ve (somewhat unknowingly) made their own.

SOMETIMES IT ENDS
Sometimes it Ends bears resemblances to the band’s older output, opening on a pre-recorded discussion held by Bruce. “I’ve got a guy who’s my best friend and he’s kinda turned my back on me and bailed” declares the guitarist at the start, before continuing his monologue by outlining Stoff’s influence on his, and the group’s, rebirth. Personal problems and past situations aside, Sometimes it Ends is a great track. As Bruce’s monologue ends, fast-paced riffs enter the frame as Stoff shouts out, “here we fucking go!” He manages to make good use of his vocal range here, applying some higher tones to his growls and subsequently giving the track a sense of newfound swagger which previous Asking Alexandria songs never had. The band’s rhythm section is absolutely pivotal here, with drummer James Cassells and bassist Sam Bettley effortlessly underpinning proceedings. “Sometimes it ends, sometimes you fall” sings Stoff during the mid-paced chorus, one which is accompanied by stadium-ready gang chants and knife-like instrumental precision. “If you can’t find the words, then read between the lines” is one lyric which stands out the most on this track, one which ends on another likeminded monologue by Bruce on gratefulness and lyrical influence.

THE LOST SOULS
An eerily haunting piano line opens up The Lost Souls, before Cassells introduces marching band-esque drumming to the frame. As strings build up the intensity, everything flows into an anthemic, “whoah”-laden intro fit for soundtracking the most triumphant of TV shows (think Game of Thrones). The Lost Souls’ real selling point is Stoff’s oft-proven ability to accompany metalcore growls with crazy vocal range changes, all the while throwing a fit-for-stadiums chorus into the mix. The Lost Souls’ structure flitters between operatic, heavy-as-fuck verses and anthemic choruses, something which has become a selling point for most bands in today’s over-saturated scene. However, Stoff and co. manage to add something different to their tracks which gives them an overall edge in comparison to other contemporaries in the scene today. “One, two, three, let’s go!” shouts Stoff during the bouncy breakdown, before declaring, “we are the lost souls” repeatedly until a haunting piano takes over once more.

JUST A SLAVE TO ROCK ‘N ROLL
If there’s one song on The Black which is a definite nod to Worsnop, then it’s Just a Slave to Rock ‘n Roll. From its cowbell-tinged riffs to pure rock ‘n roll swagger, this track seems like a definite hint towards their former frontman. “It’s time to move on and just walk away” claims Stoff during the chorus, before Cassells and Bettley’s tight rhythms work alongside some Slash-esque shredding courtesy of Bruce. “I’m out of my fucking mind” declares Stoff later on, his declaration being accompanied by the heaviest breakdown on the record so far. SEND ME HOME
Send Me Home is by far the poppiest song on the record, seeming almost fit for radio play and comparisons to the likes of 30 Seconds to Mars, All Time Low (their slower, more mature output) and, god forbid, any 80s power rock ballad. According to Bruce, Send me Home is the first song which Stoff sang over when he was sent the demo early last year. This adds an extra element of emotional meaning to the track, because it’s the one which sparked Asking Alexandria’s future. It’s not the kind of thing you’d expect from Stoff and co. whatsoever, but it’s definitely one of the most noteworthy songs on the album due to its pure ‘hit’ factor.

WE’LL BE OK
“Your voice is calling my name” declares Stoff at the start of We’ll Be OK, before a fast-paced riff takes the helm of proceedings during a large part of the track. It’s an interesting song, flittering between various tempo’s whilst it tries to find its proper place on the record. We’ll Be OK isn’t the most unique track on the record, following a formula which the band have now been putting to the test for almost half an hour in different shapes and disguises. That’s not to say that it’s a bad track, though; rather, We’ll Be OK is a straightforward banger which allows the pulsating rhythms and fast-paced guitars to do the talking. The breakdown is absolutely monstrous, with Stoff’s chopped up vocals sounding deeper and more guttural than ever before. As the track comes to a twinkling, anthemic ending, marching band drums re-enter the frame as the band sound almost as if they’re reigning victorious.

HERE I AM
The recently premiered Here I Am is a whole cacophony of different sounds, starting off on a slower combination of chanted vocals and classic rock riffs fit for large venues the world over. As the track careers on, it becomes strikingly more evident that it’s one of the weakest songs on The Black. Which says a lot, because Here I Am is still a catchy rocker which demonstrates one of the main reasons Stoff is currently in the band – his vocal range. One minute he’ll be singing clean vocals which sound sweeter than sugar, and the next he’ll be pulling off a falsetto which could even make Matt Bellamy raise his eyebrows. That’s not to mention his ability to pull a smoke-y, classic rock vocal tone out of the bag, too.

GONE
An opening salvo of strings and keys bring Gone to life, a track which features a majority of Bruce’s vocal input on the record. “So what am I supposed to do now that I’ve reached the end?” asks the guitarist on this piano ballad, claiming that he’s been “sad for far too long” as he slips away. Gone is the essence of putting your heart on your sleeve, which is exactly what Bruce does here. The happier piano lines on the track are accompanied by a selection of strings which give the track a filmic edge, something that definitely helps in adding a new dimension to the record – cinematic range.

UNDIVIDED
Undivided was the second track to be released following Stoff’s arrival, sounding much like a fierce-as-fuck battle cry. Menacing riffs, pulsating bass and extremely pacey drumming are the backbone on this track, with the chorus only adding to its already impressive sonic structure. “Take all your memories, ‘cus I don’t want them” declares Stoff during the chorus, before following it up with rather ferocious growls and Bruce’s extreme vocal missives. The track’s build-up features a fabricated-sounding choir and some electronic percussion, before the rest of Undivided follows a similar structure to the preceding three minutes.

CIRCLED BY THE WOLVES
Circled by the Wolves opens up on a recording error, before the volume increases and the actual song kicks in. It’s another fast one which utilizes chopped up vocals and totally-in-sync guitar/rhythm combinations, an absolutely wondrous pairing when it comes to finding suitable musical accompaniment for Stoff’s sporadic vocals. As album finale’s go, Circled by the Wolves does a pretty good job in calling the curtain on what’s been a pretty impressive record. “So can you hear me now? Say my name!” declares Stoff during the post-chorus, finally cementing his arrival after an absolute whirlwind of a musical journey. The track comes to a rather abrupt end, but not before a classic-Asking Alexandria 0000-breakdown enters the frame. It felt almost as if the album needed one more sonic throwback to show everyone that they’ve stayed true to their roots despite the change in vocalist, and that’s exactly what Asking Alexandria have done on Circled by the Wolves.

On The Black, Asking Alexandria have boldly and proudly shown the whole world that Denis Stoff is here to stay. From Let it Sleep’s cathartic opening missives all the way through to Circled by the Wolves, The Black is an absolutely thrilling metalcore record. It’s all fair and well to criticize the band for just, well, being Asking Alexandria, but it would be unfair on everyone involved to make such judgements when a record of this calibre has just been delivered. Welcome back, Asking Alexandria.

The Black is out next week Friday (25 March) via Sumerian Records.