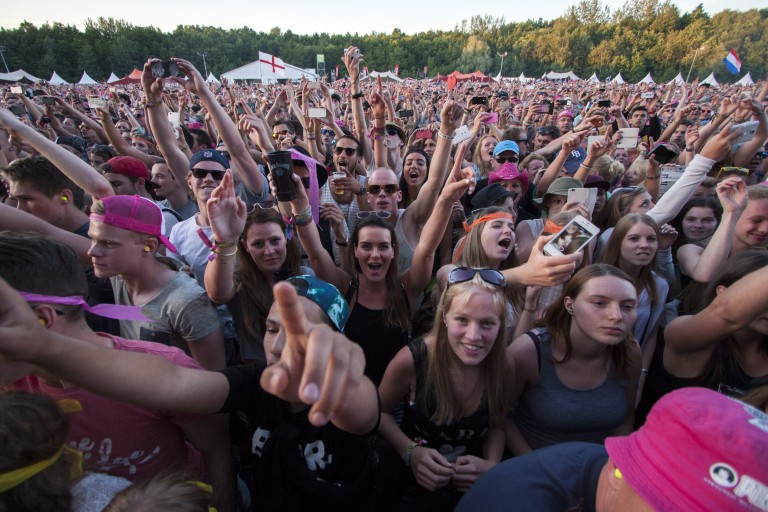 Five Moments to Look Out For at Pinkpop 2016

It’s now roughly three weeks until 70,000+ people descend upon Landgraaf for Pinkpop’s massive 2016 edition. Featuring performances by Red Hot Chili Peppers, Rammstein and Paul McCartney, Pinkpop 2016 looks set to be one of the biggest editions ever. Late last month we sat down with founder Jan Smeets for an in-depth chat, both parts of which are available here and here. To precede the festival’s impending kick-off, we’ve selected five moments which we can’t wait for at Pinkpop 2016. We can’t wait for:

RAMMSTEIN TO BRING THE FIRE AND THE FLAMES
Rammstein may not have released a record for quite some time, but that doesn’t quite rule out their status as legendary live band. When you book Rammstein for a show, you generally have to keep a handful of things in mind: 1) huge, industrial anthems, 2) controversial visuals and 3) lots of pyrotechnics. You ought to ensure that the stage doesn’t melt, because it’s one of the many live elements which Rammstein pride themselves on: fire. All together now, “du hast, du hast mich”… PAUL MCCARTNEY TO SHOW PINKPOP WHAT A LEGEND’S MASTERCLASS LOOKS LIKE
It’s not very often that you get one of the world’s most legendary musicians to headline a festival, which makes Paul McCartney’s Sunday evening finale relatively unmissable. With almost fifty years of musical expertise behind his back, Paul is set to offer Landgraaf a masterclass in how to maintain a legacy after so many years at the top. He’s not just got a whole Beatles back catalogue to draw from, no; he’s also got his work with Wings and recent solo ventures to lean on. Paul McCartney may well be the best booking Pinkpop have ever made, without a shadow of a doubt. Combine that with Lionel Richie’s surprising support set and you’ve got an unforgettable final night in Landgraaf.

BRING ME THE HORIZON TO TEAR LANDGRAAF A NEW ONE
It’s not often that you see a band in Landgraaf whose roots lie in the deepest, darkest and most brutal metalcore of the last decade. Even though Sheffield’s Bring Me the Horizon don’t really fall under this category anymore, they’ve still managed to prove a point: heavy music does have a home in Landgraaf. 2015’s That’s the Spirit may have been slightly poppier and radio friendly than its predecessors, but it still demonstrated Oli Sykes and co.’s ability to transform themselves record after record whilst still sticking to the core elements of what made them massive in the first place. Get ready to open that pit up, because Sykes and his men are on their way.

THE MAINSTREAM BREAKTHROUGH OF NOTHING BUT THIEVES
Nothing But Thieves’ gradual breakthrough has been a long time coming, but now it’s finally starting to look like all their hard work will see the Southend quintet reap huge rewards. Last year, the band toured at a non-stop pace across with the world, with the Conor Mason-fronted alt rockers having even toured with Muse earlier this year. Their sonic likeness to the Teignmouth quintet, as well as early Radiohead and classic Led Zeppelin, shouldn’t come as a surprise to avid listeners, most of whom form a huge part of the band’s constantly growing fanbase. Their set at Pinkpop will see them perform to a tent likely packed to the rafters, and it’s definitely going to be the start of something special. THE GRAND RETURN OF RED HOT CHILI PEPPERS
Need we say more? Red Hot Chili Peppers have been out of the game since 2011’s sublime I’m With You, meaning that it’s about time that they forced their way back to the top. New album The Getaway comes out on 17 June, with lead single Dark Necessities presenting the world with a soulful blend of funk rock and RnB. It wasn’t the kind of smack in the face which early classics Can’t Stop and Californication made for, but the track still bubbled up to proportions which were epic by the Chili Peppers’ standards. Despite having been given a mere hour long set time, the Friday headliners will surely deliver Landgraaf with the biggest party it’s seen since La Pegatina’s sunny show in 2013.