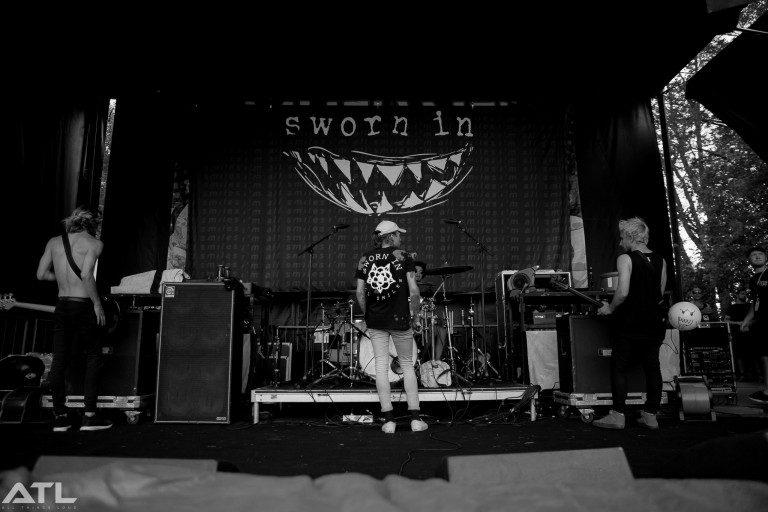 What do you get when you stumble across absolutely destructive vocals, post-apocalyptic riffs and Frankie Palmeri all in the same place? The 2017 Never Say Die Tour, of course. The annual travelling feast, sponsored by Impericon, will once again set sail this autumn and stop off in various cities across mainland Europe and the UK. Boasting a line-up packed to the rafters with metal- and deathcore’s finest, Never Say Die intends to present fans with some established behemoths and bands who will more likely than not become your favourite in years to come. An unforgettable night, essentially. This year, rejuvenated heroes Emmure, Aussie madmen Deez Nuts and American brutalists Chelsea Grin will top the bill alongside Sworn In, Kublai Khan, Lorna Shore and Polaris. All seven bands will stop off at the Patronaat in Haarlem next month (9 November), and we’ve outlined five reasons which should do nothing but get you on a train to Haarlem in four weeks’ time. EMMURE ARE BACK, AND THEY’RE HEAVIER THAN BEFORE
Forget everything you knew about pre-2016 Emmure, because you’ll more likely than not be disappointed. Why? Because the Emmure that roams this earth today is a world away from the one everyone grew accustomed to during their rise. Last year, frontman Frankie Palmeri ended up becoming the only remaining remember of his band when his bandmates jumped ship. Following a period of rebuilding and essentially going back to square one, Palmeri relaunched the band to much critical acclaim. New album Look At Yourself is the Emmure record which everyone waited so long for, also doubling up as the first step in their latest attempt at world domination. They’ll be headlining this year’s Never Say Die Tour, and quite rightly so. Emmure are back and ready to operate on a whole new level, and they’ll make sure everyone knows it.

YOU WON’T SEE THIS LINE-UP ANYWHERE ELSE
The Never Say Die line-up tends to be so expansive and boundary-pushing that you’re unlikely to find all the same bands in the same place, let alone at the same time. This year you’ve got rising stars Sworn In sharing a stage with the hard-hitting Kublai Khan, two bands whose positions within the ‘heavy’ world couldn’t be further apart. You could suggest that this is what makes the Never Say Die Tour, as well as Impericon’s own May festival, so diverse, exciting and worth the money. You’ll find yourself paying no more than 25 euros for seven bands, all of whom bring something new and fresh to the table.

PATRONAAT: THE PERFECT LOCATION
As per usual, the Dutch leg of the Never Say Die Tour will take place at the Patronaat in Haarlem. The Dutch city is a stone’s throw from Amsterdam, offering good accessibility to the capital as well as a unique vibe of its own. You won’t have to put up with large groups of Italian tourists of Japanese travellers, nor will you have to look twelve times before you cross the street. The Patronaat’s multiple rooms hold between 350 and 975 visitors, further possessing all the best facilities you could wish for in making your festival experience worthwhile. Who knows, you might just leave Haarlem with plenty of desire to return asap. SWORN IN: RISING STARS WITH A POINT TO PROVE
You probably haven’t heard of Sworn In, but expect that to change soon. The Illinois outfit have made plenty of waves back home, putting out three successful studio albums in the process. Their most recent release, All Smiles, doubled up as their debut with renowned label Fearless Records. They subsequently spent the summer tearing up the Vans Warped Tour, pulling large crowds in practically every city they stopped off at. Now, they’re bringing their intense live show to Europe as part of the Never Say Die jaunt, and you couldn’t wish for a better opportunity to witness Tyler Dennen and co. tear shit up.

The 2017 Never Say Die Tour will stop off at the Patronaat in Haarlem on 9 November. Get your tickets here.