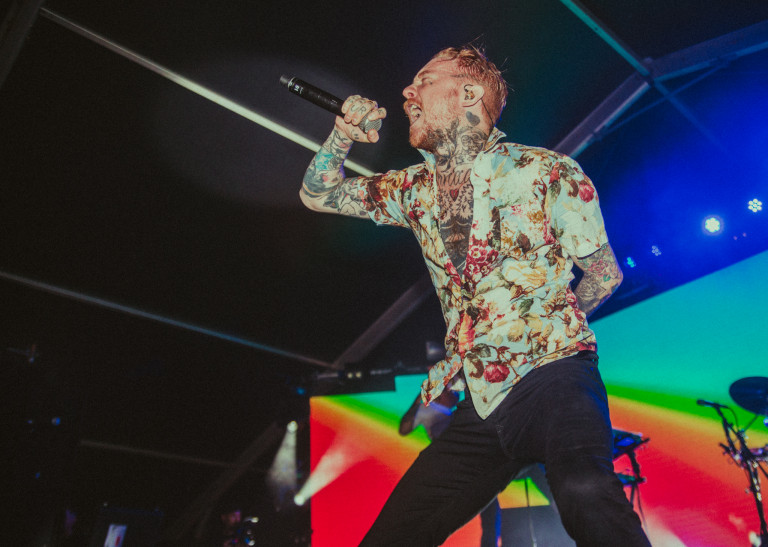 Another year, another Down The Rabbit Hole. Once again the masses descend upon the Groene Huevels to witness a carefully curated and eclectic collection of artists entertaining them the way they do best. Though good music is a bonus at a festival, there’s one thing that the organisers have no control over yet matters more than anything they can possibly plan: the weather. Fortunately for everyone, the sun was shining on Ewijk as campers tried to find their new home for the weekend. When the weather’s good and the opening day energy is buzzing through the crowd, you need the music to match. Fortunately, Frank Carter & The Rattlesnakes were on hand to do just that. Creating more heat in the Fuzzy Lop tent than most people could cope with, Frank belted out the likes of Tyrant Lizard King and Kitty Sucker with an energy that was as contagious as it was intense. Any artist who can start an audience-wide circle-pit from words of encouragement alone knows what they’re doing.

Although Low released one of their finest albums last year in Double Negative, sharing the same stage that Frank Carter had just devastated was always going to be a tough mood switch. A gentle rendition of Always Up may have sounded stunning with the perfect visuals to match, but it wasn’t enough to stop the majority of the audience from chatting away to each other. Low make music that makes you want to hibernate with every one of Alan Sparhawk’s guitar hits being calculated and in its right place. In the sweltering tent, you could barely pull the notes apart from the background noise. No Comprende picks the audience up a little, but with the majority of the setlist drawing from Double Negative, it’s just a case of the wrong place and the wrong time. While it was a shame that Sofi Tukker didn’t end up playing the festival, replacing their absence with Neneh Cherry more than made up for it. While never having been the most prolific artist, when she releases something new people sit up and take notice. Her album Broken Politics from last year sounded more vital than she ever has with songs like Shot Gun Shack sounding amazing. Her set was a tour de force of her strong back catalogue, proving that there’s much more to her than 7 Seconds.

dEUS powering through a redux version of their critically acclaimed album The Ideal Crash was a sight to behold. The album came out twenty years ago but still sounded so modern under these circumstances. Perhaps since their age makes it harder for them to indulge in on stage acrobatics, many of the songs were punctuated with a series of dancers moving through a series of visceral moves to the songs they played. It was a nice touch and used relatively sparingly, creating something new out of something old. Rolling Blackouts Coastal Fever sounded so much more intense live than their recorded counterpart would suggest. I was fully prepared for the reverb to wash over me and take it easy, but it didn’t take long for the audience to start dancing as the band ripped through their short yet impressive back catalogue, with French Press, in particular, getting things going. Meanwhile, Skepta showed the Teddy Widder stage exactly what a Shutdown is supposed to look like, tearing the ominous blue tent a new one over the course of a sweaty sixty minutes.

Nijmegen’s De Staat opened their main stage set with Down The Rabbit Hole, a song which summarizes the perfect synergy of everything this festival is about. Dressed in a silver suit, Torre Florim is a commanding frontman with a god-like presence. It’s a role he was happy to indulge in as an elevating platform lifted him above the crowd to give the entire audience a good view. Songs like Tie Me Down from their latest album Bubble Gum remind you that this is the most exciting band in The Netherlands right now. The additional backing vocals from Luwten proved as the perfect counterpoint. The whole set was so strong that the inevitable circle pit in Witch Doctor just felt like the cherry on top. Closing out the set with KITTY KITTY was the perfect ending and left you feeling that a future headline slot from the band wouldn’t be an entirely unreasonable idea.

It’s no secret that 80s icon Grace Jones is a bit of a diva, yet for those still unaware she did that one little thing which drives the crowd absolutely mad: show up late. Not just by a few minutes, but by a full half an hour. It’s the kind of brazen act which you can only pull off well if you’re at a level of notoriety which warrants it; luckily for Jones, she is. Donning a golden skull mask and flamboyant outfit, she kicked off the sit on a brooding rendition of Iggy Pop’s Nightclubbing, a staple opener in her live shows for as long as you can remember. Jones had the entire tent in the palm of her hands for the duration of her time on stage, once again proving her worth not only as a performing musician, but also as an artiste. Jones’ inability to schedule didn’t serve as that big of an issue for headliners Editors, a band whose steady growth on Dutch soil has seen them slot in nicely to the role of festival headliners. They did it at Best Kept Secret in 2016, and Lowlands in 2017, with last night marking their first appearance at Down the Rabbit Hole. Tom Smith will forever remain one of the most charistmatic frontmen in alternative rock, commandeering the stage with little to no difficulty as he and his band powered through 90 minutes of greatest hits, and a small glimpse of the future. Said glimpse came in the form of show finale Frankenstein, the mental new single which features a hook so earworm-worthy that it’ll be stuck in your head for days. With a fireworks show to boot, Editors gave Down the Rabbit Hole’s full main stage field a night to remember on the opening day.