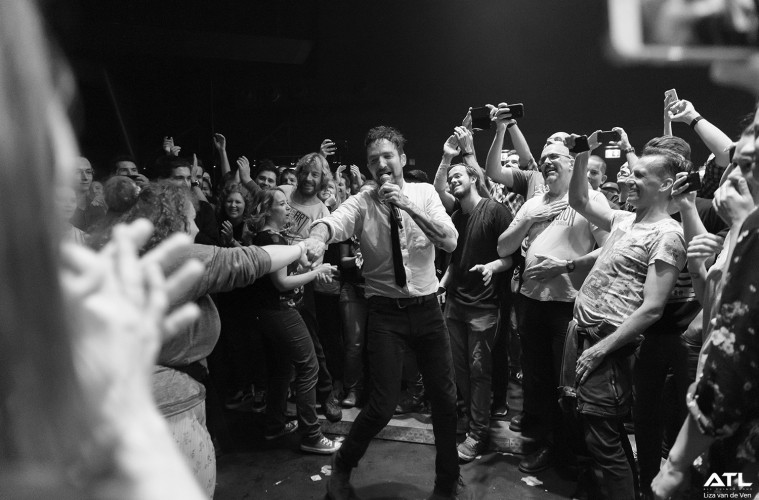 Frank Turner: A Reflection on 2018

I’m sitting in a hotel room in Adelaide, South Australia. It’s a corner room with many windows giving out onto the sea and the sand, bright in the Antipodean summer sun. Last night we played our final show of 2018, so while there is still a little of the year left to run, from a professional and public standpoint, I’m done.

As I get older (I’m turning 37 in a few weeks), the passage of time becomes, in a way, less remarkable. Another year done, it seems a little more routine now than it did when I was younger. That said, I’ve settled into a professional routine now that I’m proud of and that took years of work to put into place, so I’m not complaining. I don’t feel like I wasted much time these last 12 months. I’m something of a numbers geek in my spare time, so I can back that statement up with some facts. I played 60 solo shows, 106 shows with the Sleeping Souls, and 4 with my side project, Mongol Horde.

I’ve played in 19 different countries (including 25 US states and 7 Canadian provinces), and have broken new touring ground around the world, from Dover to Alaska, Vancouver Island to Krakow. All this was engendered, of course, by the release of my seventh studio solo album, “Be More Kind”, in May this year. I’m firmly in uncharted waters in my career now, well beyond the reach of cliché or prediction. To be releasing a seventh record and still playing my biggest headline shows to date almost everywhere we go is an unusual thing. I like to think I’m hard to categorise as an artist, and certainly, with the passage of time, shows and albums, it gets harder to write me off too easily. My endless suspicion that all the success I’ve enjoyed is some kind of cosmic accounting error, that some day the reality police will knock at my door and tell me there’s been a mix-up, recedes with each passing year.

On a more personal note, it’s been a year of (mostly) ups and (some significant) downs. At 36 years old, I finally learned how to drive, passing my test (first time!) in July. I’ve been meaning to do it for years, but time got away with me. It feels good to have ticked that off a to-do list. I finished writing a second book –much more on that in the new year – and have been writing new music, for myself and various side projects, consistently. Most importantly of all, of course, I got engaged to be married to the woman I love, and it’s brought me a new sense of peace, for which I’m grateful.

On the downside, this year has seen two very significant losses for me. In May, my friend Scott Hutchison took his own life. The news came through on the first morning of Lost Evenings 2 – a festival Scott had played the year before. I remember sitting in deckchairs in the sunshine out back, smoking cigarettes and shooting the shit. His death still seems barely plausible, and I catch myself thinking of him most days. On the tour around the world, we’ve been playing Frightened Rabbit songs in between sets. Hearing his voice over the PA, often in the background, has made it feel like he’s very much still around, and I like that. On top of that, in June my uncle Richard passed away after a long fight with cancer. He was a toweringly important figure in my life, and a good, good man. Both are sorely missed.

So there it is. Another 365 days, with their ups and their downs, the stuff of adult life. But then again, as Philip Larkin said, “Days are where we live. / They come, they wake us / Time and time over. / They are happy to be in: Where can we live but days?”