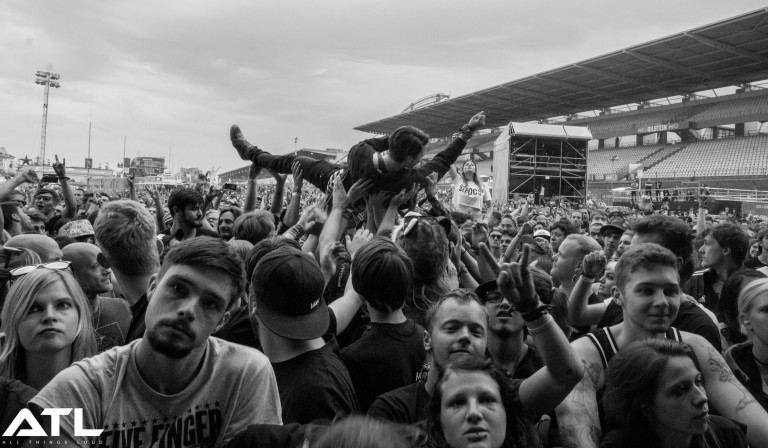 As of today, there’s a grand total of 21 days to go until Rock am Ring opens its doors once more for what looks set to be the biggest and most successful edition in the German behemoth weekender’s history. Never before has the Nürburgring bash put on a billing which is equally as forward-thinking and relevant in today’s musical climate as it is solid and reflective of the bands who put rock music on the map back in the day. All Things Loud will be bringing you full, uninterrupted coverage of Rock am Ring for the duration of its three days, from the moment the camping site goes open on Thursday evening through to the moment that the final hungover visitors drag themselves away from the beer tent on Monday morning. To assist in that, we’ve got another set of recommendations for you to digest as you figure out exactly who you should be checking out in three weeks.

You may not be aware of this just yet, but South American bands can rock just as hard as their Western counterparts. Take Brazilian hard rockers Ego Kill Talent as a prime example. The São Paolo quintet have seen their career skyrocket back home, allowing them to hit the road with Foo Fighters and Queens of the Stone Age thanks to their incredibly solid brand of hard rock. Frontman Jonathan Correa possesses an incendiary vocal tone which is devoid of any distracting dialects and sounds just like some of the best out there. Their presence in Europe is still very much under the radar, but with appearances at the likes of Download Festival and Nova Rock (as well as Rock am Ring, of course) pencilled in for the summer, you could suggest that this is all about to change. Saturday, Alternastage, 16:40

From a relatively unknown new band to the frontman of one of the world’s biggest: Korn’s Jonathan Davis. The vocalist of nu-metal’s wackiest prime export has gone solo, inking a deal with Sumerian Records in the process as he gears up towards the release of debut album Black Labyrinth (due 25 May). Davis is no stranger to the Nürburgring, having appeared there with Korn seven times in the space of thirteen years. This would have been eight times, had the final day of Rock am Ring 2016 (in Mendig, a location which lasted a mere two years) not been cancelled due to adverse weather. Davis is back this year to treat German fans to something slightly different from what they’re used to hearing, but it’ll undoubtedly be just as sonically intriguing and visually impressive. Friday, Beck’s Crater Stage, 17:20

It wouldn’t be a successful music festival without a successful Irish indie rock band, and this year Walking on Cars are one of two Emerald Isle acts to fill this criteria (the other being Northern neighbours Snow Patrol). Patrick Sheehy and co. are currently adding the finishing touches to their hotly anticipated sophomore album, which serves as the follow-up to 2016’s Everything This Way. What the future brings for the quintet – musically, that is – remains to be seen, however you can bet your bottom dollar that Sheehy and his compadres will make good use of their time on Rock am Ring’s main stage to show Germany exactly what they’ve been up to. Friday, Seat Volcano Stage, 15:00

Throughout its illustrious history, Rock am Ring has always paid good attention to Germany’s bustling music scene. It’s one which spans so many different styles, all of which receive equal mainstream attention and contribute to the country’s vibrant live music culture in ways that other countries just, well, can’t. So much so that there are tons of German bands capable of headlining the festival’s main stage simply based on their national success. Bilderbuch is one such example, with their final day set at Rock am Ring seeing them play the same slot as Stone Sour and Parkway Drive do on the two prior nights. And quite rightly so, because Bilderbuch are one of Germany’s most exciting musical exports. Why, we hear you ask? Well, you’ll just have to head down to the Crater Stage and find out for yourself as to why this band get so many people up on their feet and moving like there’s no tomorrow. Sunday, Beck’s Crater Stage, 22:25

Bury Tomorrow are one of the UK’s most interesting metalcore projects, having found themselves at a round table last year signing with Sony Music in a deal which shines great light and recognition on one of the underground scene’s best bands. The Hampshire outfit will put out new studio album Black Flame on 13 July (which follows 2016’s visceral Earthbound), and if we’re to believe the rumours then it’s going to be their hardest hitting collection of music to date. Allow them to treat you to a sneak preview of its contents on 2 June, because that’ll be the day that they (hopefully) conquer the hearts of Germany’s ever-critical metal community. Saturday, Beck’s Crater Stage, 14:10

Rock am Ring takes place from 1-3 June at the Nürburgring in Germany. There are still limited day tickets available, which you can get here. Check out the entire line-up below, and head here for all of our coverage thus far.