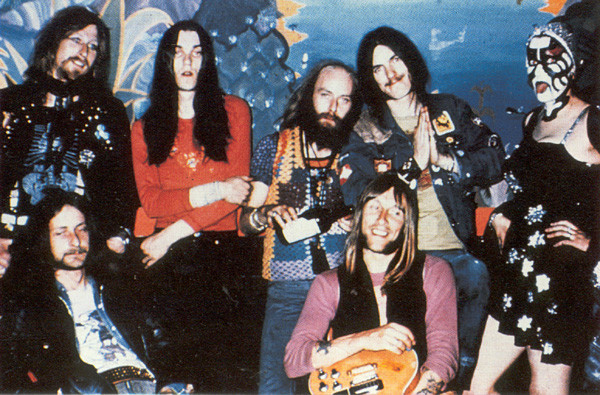 In this first instalment of genre deep dive, we’ll be going over the space rock genre. Popularized by bands such as Hawkwind and Pink Floyd in the early 70s, the genre initially came about as a progressive and psychedelic rock exploration of themes of outer space. Otherworldly sounds created by heavily layered distortion and reverb effects on top of ethereal and drone-like synthesized sounds created a sense of floating through the cosmos.

One of the earliest examples of an artist dabbling in the sonic textures of first-wave space rock was songwriter & sound engineer Joe Meek. His album I Hear A New World is often cited as one of the earliest and most prominent examples in the experimentation of the musical ideas ultimately employed in space rock as we know it today. Recorded and (partially) released during 1959 and 1960, the album was heavily inspired by Meek’s fascination with the space programme that had developed at the time. It was, however, Pink Floyd who truly popularized the style with songs such as Interstellar Overdrive or Set The Controls for the Heart of the Sun in the late 60s. Notable artists such as David Bowie (Space Oddity) or Jimi Hendrix (Third Stone From the Sun) also dove into the realm of space rock exploration and helped bring it to a mainstream audience.

Ultimately, Hawkwind’s Space Ritual was the album which truly set first-wave space rock ideas in stone. Released in 1973, it sits a lengthy 2 hours and 12 minutes and aims to take the listener through a journey of classic progressive & psychedelic rock typical of the time period, yet with a twist. Scattered throughout the album, beyond the fuzzy guitars, warm bass tones and heavily reverberated vocals, lay meticulously crafted sound palettes which form the basis of cosmic sound. Oscillating synthesizers, drawn-out drone effects and muffled, NASA-like vocal passages create a sense of infinite space. The mix is brilliantly executed by Vic Maile, leaving the core elements to fill up the centre of the listener’s attention but dragging their attention outwards with sonic textures, as if to audibly pull away the listener from mother earth into the void of the unknown.

A brief period of mainstream silence followed the booming success of space rock during the late 60s and 70s. Both due to the popularity of other, more electronically driven genres making an appearance in the 80s, as well as the loss of interest in the space program by the general public, the genre dwindled into obscurity as some bands still desperately held on to what made the genre popular. It wasn’t until the late 90s that the genre returned through diversification and further experimentation. New guitar-based genres and styles started floating to the surface as pedalboard-addicted musicians became eager to test out their new toys in front of an audience. Genres and styles like shoegaze, post-rock and noise-pop, to name a few, all took a bite out of the space rock cake. Bands such as Flying Saucer Attack, Loop, Hum, Spaceman 3 and Spiritualized all have their influences in early space rock and adopted the stylistic features of it in their unique blend of artistry. The focus was quite clear: lots of effects and vast atmospheres. Space rock had a created a comfortable place for itself in the rock stratosphere – not being too popular, yet also not being drowned out by other interests. Sébastien Gamez.