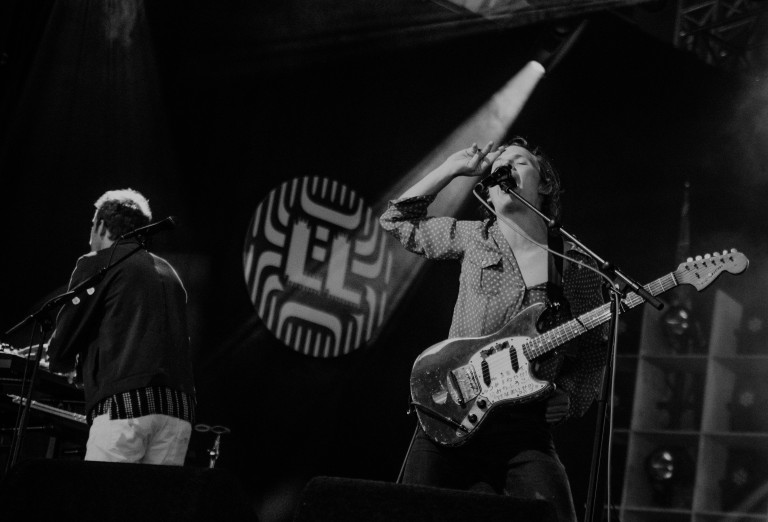 Nick Allbrook is getting old. The frontman of Australian psych-meets-whatever else outfit POND – now 33 – has seen it all in the last decade or so, touring a continuously changing world while getting to grips with the growing gap between him and today’s Gen Z generation. In October, POND’s ninth studio album 9 is due, having already spawned the curveball Pink Lunettes, swanky America’s Cup and dreamy Toast. As the quintet release new single Human Touch this morning, Jack Parker called up Allbrook to discuss the intriguing sonic and personal components which formed the band’s best album since Man It Feels Like Space Again.

Hey Nick. How are you? I hear you’re in London.
Yeah, I got here about a month ago. I’m not too bad, still getting settled but the sun’s out!

9 is your aptly titled ninth studio album and it’s the first record you made without Kevin Parker (Tame Impala) producing. Was this a forced change due to the pandemic?
It wasn’t forced, no. It was what we wanted to do – something different. We wanted to change up the formula because on Tasmania and The Weather we’d sort of stuck to similar ways in the same place, which was Kevin’s studio with him mixing and producing. We wanted to shake it up.

Song For Agnes is a bold opener. Can you break its components down for me?
The first thing you hear is a choir, which was done by a great French artist friend of ours. She layered her vocals to do these really amazing harmonies. Musically it came out of some other songs that we had, essentially a very basic looping idea of two chords which Jay (Watson) had. He sent them to me and I put some lyrics over it which were about the abstract minimalist artist Agnes Martin. I really love her and she’s got an amazing story. Her philosophical approach to art and life are very inspiring and interesting.

Tell me a little more about the America’s Cup. I understand it had quite the impact on Fremantle.
I mean, I wasn’t there but retrospectively it got looked at as a watershed moment for this little port city. It went from being a pretty grimey place to having the eyes of the world directed towards it like some sort of sunny paradise wedged between the river and the ocean. That kicked off this long change for Fremantle from being a refuge for outcasts to becoming a desirable place to live.

The track America’s Cup highlights the gentrification of Fremantle. Do the pros of gentrification outweigh the cons, or vice versa?
It’s very hard to say, especially as someone of my socio economic demographic. Gentrification does play into my hands in a big way, but it has a terrible impact on people who – through much harder economic circumstances – carved out a community and a place where they can live. When I first went to Williamsburg [New York] people bitched about how hip it was, but I’d just rocked up in this place where I could buy good records, good food and good clothes and I thought, “fuck, if this is hipster, then call me a hipster”. But that’s a very privileged point of view, of course.

Would POND have existed without gentrification?
I’m not sure. We weren’t drawn together geographically in that way, but I guess there is then the question of if the influence of the art and music that got us making whatever the fuck we make had reached our ears without gentrification. Without that process, and without communities coming together and being interested in that sort of shit, would we have had a place to even play gigs? If it wasn’t for gentrification would people have had a way of communicating and sharing our music? Now we have the Internet, but on the whole it’s definitely had an effect on us.

The generational divide is also something you talk about across the album, in particular on Pink Lunettes and Rambo. Tell me a bit more about what the generational divide represents for you, particularly in the context of these songs.
I started becoming friends and hanging out with people who were just like me in a lot of ways, only five, seven years younger. They were coming up into the role of taking art and music into their hands; guiding the ship. I started noticing that there were some points of division and change that was on the other side of. I was never an internet native. Gen Z are so much more across all of the issues of these times and a lot of people my age try to keep up, but there’s just less seismic shifts. They’re still there, like with alcohol and cigarettes; I went to a party in LA once and people were putting this drug in their fizzy water which I’d never heard of. I was drinking a beer! They were like, “aw, this is way better, you get a different type of high that doesn’t weigh you down like beer” and I was like, “man, I’m getting old”. Haha.

Haha. I mean, you have research chemicals nowadays and all.
Haha, yeah. It’s like cryptocurrency and shit! I suppose that reference to the generational divide was me wondering if maybe the time had come to duck forever and live in the mountains before I became the inevitable grandpa saying embarrassing things at a family dinner.

For a band who have made so many substantial sonic changes over the years, you’ve tended to avoid criticism from “the old stuff was better”-type fans and the like. Why do you think that is?
I think there’s been a little bit of it! Sometimes there are people who wish the music still sounded like Giant Tortoise or Hobo Rocket – basically a bit more manic or “psychedelic”. It’s been balanced by being a bit more inclusive, though. I know the last two albums were more sonically palatable to a wider audience, but over the years we’ve stayed quite true to how we started. You can only deviate from you past self so far if you’re still honestly expressing yourself; I think it would be hard for me to express who I am musically while making a massive stylistic change.

Your voice also stands out of course. When I hear your voice, I almost always know it’s Pond.
That’s a very nice thing to say.

A song like Pink Lunettes at first would have, for lack of a better term, alienated some fans. How did that song come about?
It came about from a tape loop on a little Casio which Jay showed me. It was a very lo-fi droning sound, it went over and over but it sounded really cool and that was pretty much it. We built out from there with drum machines, oscillators, arpeggiators and other instruments. Then I got my miscellaneous phrase book out and that was pretty much it.

There’s also the song Gold Cup / Plastic Sole. Is there a subtle reference to the sporting event of the same name here or is that just coincidence?
Haha, no, that was purely coincidental! We laughed a lot about that in the studio and we thought it was pretty funny that we noticed a ‘cup’ theme on the album. But nah, that was unintentional. I was talking about these slippers that I’d been wearing. I wore the same slippers for twelve years and the brand is called Gold Cup.

How much of the record was actually recorded during the pandemic?
A lot of it was made during the pandemic. Just before the pandemic we went in to do a couple of sessions at Tuna Fish Studios, where we just set up and played around with some fun toys and a few reels of improvised tape. We hadn’t done that for so fucking long, just making some shitty noises for ages and seeing later on it anything was worth using. The rest of the album we cobbled together post-March 2020!

The pandemic has shown us a number of fundamental flaws within the music industry. What do you think we’ve collectively learnt as an industry – in front of and behind the scenes – that needs to improve?
I guess the big thing is that artists can’t make any money through streaming. This is an old conversation now, but it forces bands to tour like fucking crazy. If you’re from Australia there’s only a few capital cities spread across the coastline of this massive continent. You have to go to America because that’s where the appetite for live music and selling merch is. It really fucks up young musicians and bands because they can’t hold down a job, maintain a relationship or see their families because they have to tour so hard and not go broke or be forgotten immediately; or so you’re told. Also, the reliance on making money from physical merchandise is taking a huge toll on the planet and I think with the pandemic it was cool to see stuff like Bandcamp enjoying a rise. People – me included – were able to make a bit of coin and get adequately paid for our work with a very low toll on the planet.

So what’s next for Pond?
I’m not sure as yet about our touring schedules, but I know we’re doing Primavera. I’ll be playing a bit by myself over here [London] and then by the time we all meet up again it’ll start to loosen up and people can move around more while we play this album and get people dancing. 9 comes out on 1 October via Spinning Top Music. Watch the video for Human Touch below.