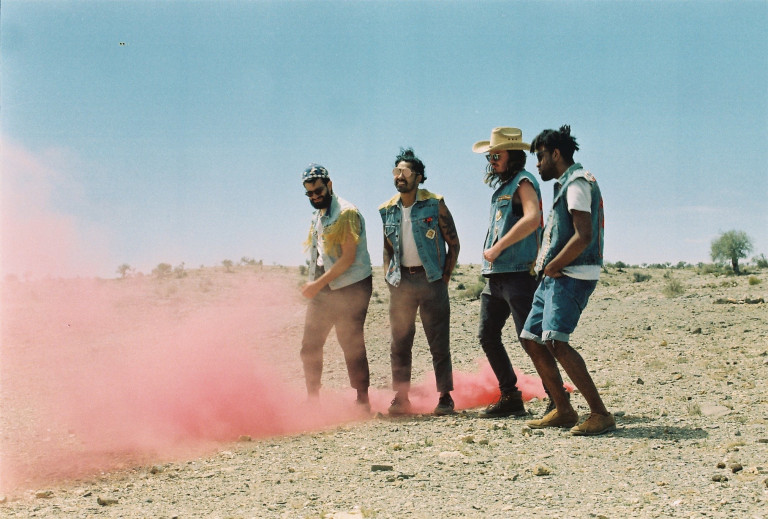 Getting Higher With Flamingods

Hey Kamal. Levitation is the fourth album, and it’s great. Could you outline for me what’s new in the world of Flamingods since the previous record?
The big change is that, going into this record, we finally all lived in the same country after a long time apart. Our last two records (2016’s Majesty and 2014’s Hyperborea) were made quite fragmented. We wrote here and there and sent stuff back and forth to one another. This time round we could all write something together and do it all at once, and most of this approach informed the album.

You explored a lot of psychedelic funk and disco on this record. How did it work out incorporating that into the record?
While we were playing together, we’d also been doing a lot of DJing. We’d started playing live less and just did a lot of these DJ nights with strange disco and funk from places like Turkey and India; all these genres we love. We were able to go into rehearsals and writing having done all of these sets together, and it gave us particular motifs, disco drums and funk guitars to work with. These genres influenced us a lot, and then we put that through a psychedelic prism.

So what was it about doing these DJ sets that possibly affected the way you approached the creative process?
I think it was just seeing what kind of things people dance to, and what affects their movement. Gaining that knowledge informs how we wanted to capture a euphoric vibe within our own music. The euphoria on Levitation is something we worked so hard towards, and it links the themes of the record.

Lots of layering in the songs then. At what point do you all look at one another and say “this is it”?
Oh man, haha. It takes a really long time! We’re not a minimalist band, we’re very much maximalist and a lot of our songs have tons and tons of layers. Weaving all of that in and creating our sound is tricky to get right because you’re working with so many different elements which stray away from normal, easy-to-mix instrumentation. We throw so much into the pot that it’s way harder to get everything in a place we’re happy with.

One member of the band lost three family members during recording. How did you all use this to collectively cope with loss?
This was all happening to the family of KP (Karthik Poduval). The big one was his father passing during the writing sessions, and that really affected some of the themes and imagery on Levitation. We wanted to celebrate his life on the album, so some songs address that specifically. It was very important to KP that we took all these things and put them in the most positive light possible. There’s a lot of positivity on Levitation.

The album features lots of guests and collaborators. How does this work in relation to the band dynamic, working with external guests?
We’ve always been the kind of band who like to collaborate. On our first record we had a few collaborators, but not as many since. Going into Levitation, we had a few people in mind who we really wanted to work with. The place we record at has a great musical community filled with likeminded musicians, and so when we’d leave the room there would be all these talented people there. We’d have them come in and play stuff, for example a sax line or something like that. Mikey from Snapped Ankles is on the record, too.

2019 is an exciting year for psychedelic-based music. What’s your take on the current state of psychedelic music and the direction it could go in?
It’s hard to say, but I think that the political landscape at the moment is absolutely bonkers, confusing and rubbish. Genres like psych capture that euphoric feeling of letting go and not being bogged down by all of that stuff. These genres give people release, and a feeling of rejecting all the shit which politics throws at you. Levitation is out on Friday (3 May) via Moshi Moshi.