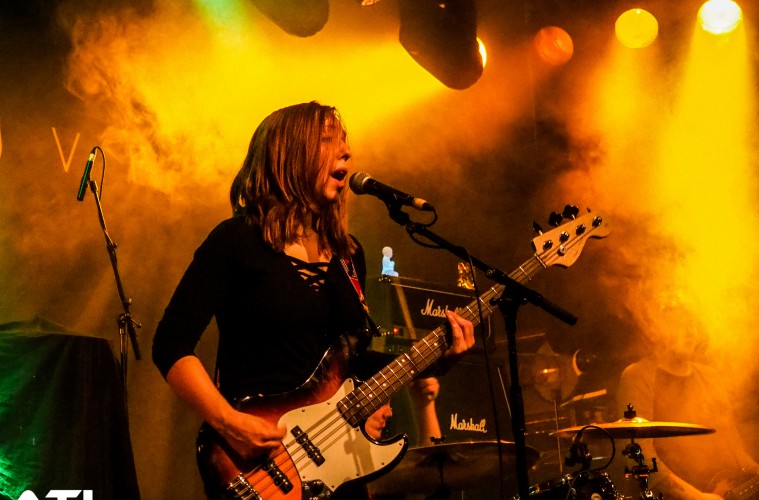 Getting to Know: MILK TEETH

It’s a rainy Sunday evening when we sit down with Stroud outfit Milk Teeth in their Amsterdam dressing room. The group have just rounded up a European tour with Aussie pop punkers Tonight Alive, a jaunt which followed the release of debut album Vile Child. We sat down with vocalist/bassist Becky and drummer Oli and got to know them a bit better.

Hey guys, how are you doing?
Becky: Good thanks!

I just want to start off with how you guys got together and formed. Can you tell us more about that?
Oli: I met our old vocalist (Josh) at college, and we all went to the same college apart from Chris (who our old vocalist knew from school). Josh approached me and asked if I wanted to start a band and I said, “sure, why not?” Then Becky and Chris joined and we worked on our first record really.

Becky: Not a record, but the EP

Oli: Oh yes, we worked on our first EP. That’s kind of it, it’s not really an interesting story, haha! We’re just four kids from a countryside town, to be honest.

The actual record, Vile Child, came out recently. Can you tell us a bit more about the recording process and how the record came to be what it is today?
Becky: We recorded it at The Ranch Production House, which is the same place where we recorded the Vitamins single, as well as the Sad Sack EP. We recorded it with Neil Kennedy, and he knows our sound and the music really well.

Oli: Ever since Sad Sack came out, we’ve sort of gotten really excited whenever we finish something. Then we start writing again, and we have the same old songs for like a year and they end up changing. The initial Vile Child demos sound completely different to what it is now, and there’s only a few tracks which kind of are similar.

Becky: We always tend to write too much, don’t we?

Oli: Yeah. I think we’ve never had a problem with it, and it’s always best to be proactive and constantly working really. I think we’d get bored otherwise. So do you have a lot of leftover songs that you plan on using?
Oli: Yeah! The song that didn’t make the album was actually my favourite one, so hopefully we can do something with that in the future.

Becky: Yeah. I mean, like, you hear about people writing 100 songs and then scaling that down to an album. We never wrote that many, because we tend to start with one idea. If people aren’t vibing that idea from the get-go then we don’t continue with it. Everything that we do put a lot of effort in to we aim to put on the record. There were only two songs which then didn’t make the record.

What approach do you then tend to take when you actually start working on a song?
Oli: It’s different, really. We have a practice space where we live, and when we go there someone might come in and be like, “I’ve got some riffs” or “I’ve got these lyrics, let’s make it work around that”. It’s basically just people with different ideas in the same environment around each other. We don’t do anything stupid like go into a ‘special’ room and only have one type of drink. It’s nothing special, we just work off each other.

Becky: Yeah. Like, I wrote a lot more with Chris on this record than I had done before, which was really cool. Some stuff we just start off in our bedroom, and then bring it to the rest of the band. I can’t drum, so Oli then kinda has to fill in the gaps.

Oli: Brain Food started from a jam in band practice, which is kinda cool.

Oli: Yeah, we just wanted to play something faster, something that wasn’t really sludge-y, but was a bit groovier. Okay, it isn’t really that groovy though, haha.

Becky: We don’t overthink things too much. Like, we didn’t approach this album differently to how we approached the previous stuff.

Oli: You could end up going, “Ah I wish this one would be faster” and then realize it doesn’t actually work best. If you’re too rigid about what you wanna do, then it won’t work. I think that’s our whole plan, to be honest. Especially with writing: just try and be as weird as possible.

Exactly. In a way your music appeals to different audiences. On one side it caters for heavier audiences, and on the other side it caters towards indie-oriented people. What are your main influences?
Becky: We listen to literally everything, we’re not music snobs at all. We listen to pop music and chart stuff as much as we listen to punk records.

Oli: I had my first lesson in a studio when I was 16, and I’m massively influenced by Slipknot. I used to get told off because all I was doing was *impersonates Slipknot blast beats with his mouth*. They all went, “no, come on”. But yeah, we all listen to everything. You could catch us listening to Fetty Wap or Drake like half the time, haha.

Becky: I think that, to be a good musician, it really helps to listen to a lot of different kinds of music. You’ve got more to draw inspiration from. When people are like, “all I listen to is metal” it’s kind of like, “whoah, where is your melody then?” It’s good to take from a lot of different places.

Oli: My college taught me that. I went in as a metal kid, and came out loving everything. If you wanna work in the industry, then there’s no way around it.

Becky: Even stuff that we wouldn’t sit down and listen to we can appreciate. We’d appreciate the musicianship or what’s been put into it, and also how it’s been written or how they play it. (To Oli) You appreciate lots of jazz drummers.

Oli: I like drummers of bands that I wouldn’t necessarily sit down and listen to. However, if I see them live I’m just sat there completely in awe of what the guy is doing. I think people are too quick to judge a band without appreciating the skill and effort behind it.

Becky: We don’t care about any of that Tumblr bullshit, the online stuff. Like, “everyone listens to this”, but we just listen to what we want. At what point did you realize that Milk Teeth could really become something? Or have you not realized that yet?
Oli: I don’t know. When I wasn’t playing to just my Mum?

Becky: It still feels like really early days, though. We’ve only just released our album and we’re just kinda seeing what happens.

Oli: Sometimes it does feel like we’ve been in a band for ages, but then you look at a band like Green Day. They’ve released album after album and we’re on our first one thinking, “fuck, we’ve been going for a while”. We really haven’t, though. This is our first ‘proper’ release.

Becky: This isn’t our full-time job. We all still work back home, which I think people forget.

Oli: The first thing for me definitely was when our manager wanted us to do a headline run. We didn’t feel confident enough to do it, and afterwards we realized that the reaction was amazing. People were coming out to the shows, and that kinda hit me. I thought it was gonna be, like, two people.

What jobs do you guys have away from the music then?
Oli: Chris and I work for temp agencies, so we do stuff like factory work, labouring or kitchen work. Anything that we can do for a couple of weeks, really.

Becky (to Billy, guitar): Bill, you’ve been doing temp work too haven’t you?

Becky: I work in a clothing shop on a zero-hours contract, so just as and when I can get work.

Oli: I think that’s it. People don’t realize that, even though you look cool, I’m a loser man. I go and work my 9-5 and sit in my bedroom with my cat all day. It’s weird, but it’s empowering to work that hard and be able to go on tour. You appreciate it a lot more.

Becky: We’re all working towards the goal of it being a full-time thing where we don’t have to work.

Chris: Don’t take that off the cards!

Oli: We just want to live off of playing rock ‘n roll.

Oli: We’ve done stuff like The Garage and the Electric Ballroom, but the fans here are so receptive. Like, every time you put your hands in the air the whole crowd starts clapping within seconds. You kind of have to take a second to realize the magnitude of it all.

Becky: And the band are really nice, too.

Becky: They get our sense of humour. I feel like American people don’t really understand British humour at all, but they understand how dry we are.

Oli: They’re also just nice people in general, and they shred every night. They’re really tight and keep us on our game! Nice! So what is the scene like back home?
Oli: Really up-and-coming!

Are there any bands standing out for you right now?
Oli: Creeper definitely. Pipe Dream are good, one of my friend’s bands. Muskets are really great too, they’re gonna be big.

Chris: Moose Blood are killing it.

Oli: Yeah, they’re killing it. Frank Carter is doing really well at the moment. The DIY scene in general, I can’t praise it enough.

Oli: Frank is pretty big now yeah. But the DIY scene is great because it gives you a platform even if you don’t have a fanbase. It’s just a place to go and play music if you wanna be in a band. It’s really cool, and it’s where we started. We’re very lucky to be here now, and that’s the dopest thing about the UK: that scene, and being able to tour even if you’re not a giant band.

Thanks for your time, and have a good show!
Becky: That’s alright, thanks!

Vile Child is out now via Hopeless Records.