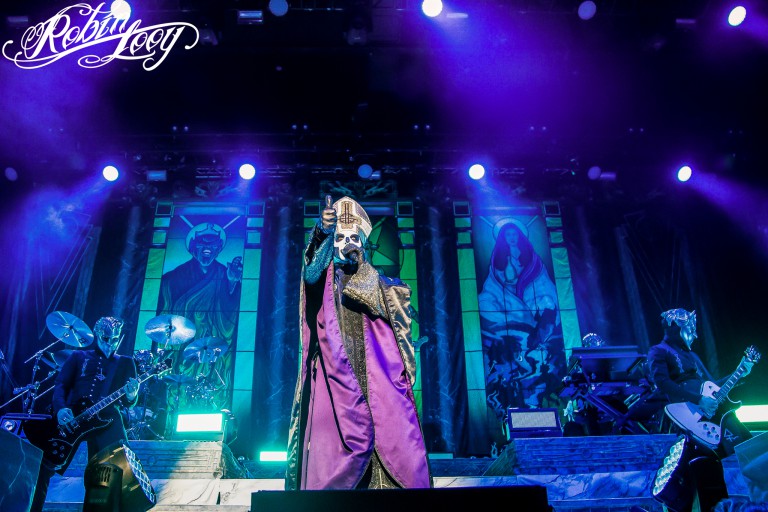 All hasn’t been too well in the conflicting and contrasting world of Swedish metal behemoths Ghost lately. The band, fronted by the newly instated Papa Emeritus III, have faced a whole host of legal battles in the last weeks which boil down to earnings and unjust replacements. The internal conflicts seem to remain unresolved to this day, yet if you’d witness their theatrical and bombastic live show many people would be none the wiser. That’s because it’s a show of world class status, one which stopped off at a near-full AFAS Live in the Dutch capital of Amsterdam.

Pennsylvania duo Zombi opened the night, boring the crowd to death with their arpeggio-lead instrumental noise rock. Sure, their music is actually pretty good, but as an opener for a band like Ghost it just seems out of place and totally wrong. The crowd seemed to agree, because interaction was at a low and interest even lower. Shame. Ghost took to the stage just after 9:15, with the incense already burning for over half an hour as the AFAS Live slowly but surely transformed itself into a meticulously planned metal church. Even the crew are in on the act, bowing down opposite one another to reveal Ghost’s drum set-up and synths. Once the show did start, it did so amidst various difficulties. The majestic Square Hammer opened the show in all its pompous glam metal glory, with Emeritus’ voice sounding stronger than ever. However, one of the band’s guitarists suffered a fault which caused his guitar sound to drop out for a whole verse, with a normally clothed crew member scurrying around to fix it. Then, as if things couldn’t get any worse for the poor bloke, he slipped and fell onto his back at the start of second track From the Pinnacle to the Pit. From that point onwards things did pick up, however for fans aware of the band’s internal troubles it may have felt like watching the show through two different perspectives. Which perspectives, though? First of all, the obvious one: Ghost are a fantastic live band unrivalled by many counterparts, and your average Ghost fan clearly had a field day as the band pulled many hits out of the bag (more on that later). Secondly: articles posted on the same day of the show have made the man behind Papa Emeritus out to be a vicious, member-replacing chap whose inability to disclose inter-band earnings left previous members with no choice but to sue. Not that the ongoing struggles seemed to have any effect on Emeritus’ onstage charm, though. For the duration of the show he kept the crowd entertained in a way only he knows best, and which can’t easily be described. As he introduced the band’s Sisters of Sin (two women who hand out bread and wine to the front row), he used comical hand gestures to inform men at the front what not to do with the women, before kicking into an explosive rendition of the slower Body and Blood. Later on, he built up the crowd’s enthusiasm ahead of the night’s heavier cut, Mummy Dust. It was by far not the highlight of the show though; rather, that came in the form of Absolution (taken from 2015’s Meliora). On record and onstage this track stands out far and wide above the rest, which is largely down to its pulsating rhythms, massive guitars and memorable light show. In fact, Ghost’s live show is what makes everything so memorable to begin with. Whether it be burning incense ahead of the show, the band’s well-thought out outfits, the co2 and flames or just the sheer bombast of it all, there’s never a dull moment during Ghost’s live show. Show closer Monstrance Clock united the 4,000-strong crowd in song as Emeritus demanded the classic chorus line be repeated after him: “come together, together as one. Come together, for Lucifer’s son!” Fans undoubtedly left that night feeling a sense of fulfilment as Emeritus and his Nameless Ghouls commandeered their attention seamlessly for just short of 90 minutes. The band are rumoured to be putting out a new record this year, with a few European shows also slated for the end of August after their US tour with Iron Maiden. Regardless of any internal troubles the Swedes may be facing, it seems to be the case that Ghost are at the top of their game right now.

Ghost’s Popestar EP is out now.