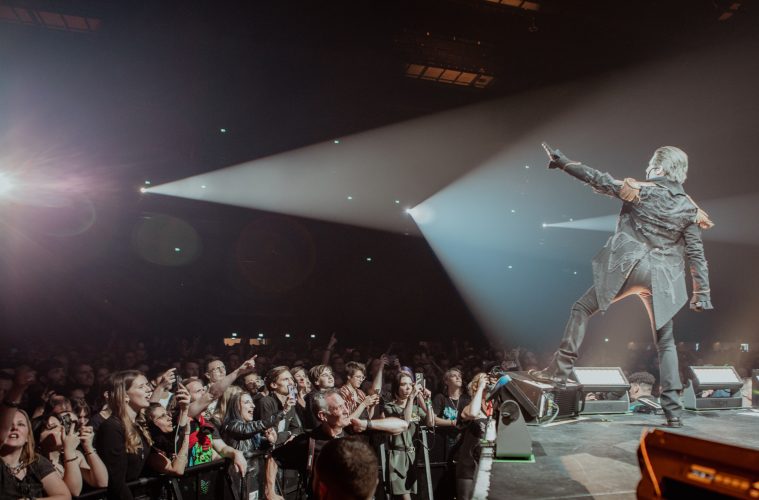 Ghost in Rotterdam: An Easter Treat At the Gates of Hell

Ghost are starting to have a penchant for playing in the Netherlands during religious celebrations. A few years back, former band leader Papa Emeritus III and his Nameless Ghouls appeared at Utrecht’s TivoliVredenburg on 5 December, the day the Netherlands celebrates Sinterklaas’ visit (Google it). Last night, and despite Papa Emeritus III being long dead, Ghost returned to the low lands for a special mass on Easter Sunday. Because why not? The group’s newest collection Impera is little over a month old, swaying back and forth between hair metal, classic rock and many other guitar music tropes. Emeritus and his ever-growing live band paid a holy visit to Rotterdam’s RTM Stage, a brand new venue with less atmosphere than purgatory.

In tow were Twin Temple and Uncle Acid & the Deadbeats, two openers whose perception of “Satan” and heavy metal couldn’t be more different. The former ventured down a doo-wop path which suited Ghost’s eccentricities well, while the latter droned and stoned their way through thirty hazy minutes (flashes of Black Sabbath abound). Enough to tie the crowd over, but not the kind of openers that made you sit up and keep listening. Each to their own, though; a review is one person’s opinion after all. Some 5,000 people made their way to the RTM Stage for Ghost’s first ever visit to the Netherlands’ second city, nearly selling out the venue as its main room became swarmed with the inevitable black t shirts and unavoidable scent of lukewarm Heineken.

After half an hour of ominous church music, the bombastic Imperium echoed through the PA as a massive white curtain dropped to make way for larger than life new track Kaisarion. It’s Ghost at their most vibrant and happy, utilising sunny guitar lines and classic hair metal passages to ring in a new era for Papa and his Ghouls. Ghost’s stage shows have never shied away from being grandiose and impressive, with this run’s Imperatour stage an unholy church of sorts complete with explosions, fire, confetti and a mini catwalk. There’s also the addition of two backing singers, who add a whole new dimension to Emeritus’ voice. I know we can call him Forge now, but that’s no fun. He’s quite capable of carrying the show by himself, but the extra voices elevate the music just that little bit extra and make you wonder why they hadn’t been there sooner. They’re here now though, and that’s what matters. Anthem Rats and bass-driven behemoth From the Pinnacle to the Pit marked two early highlights in the set, spawning rampant reactions from the crowd. This is largely helped by the incredible amount of visual stimulation onstage, which demands you pay attention as Forge caresses you in the palm of his hand.

The first half of the set shied away from hits and memorable moments, opting rather for lesser known fan favourites (Mary on a Cross), instrumental interludes-turned-guitar duels (Devil Church) and the occasional monster of a track (hello, Cirice). There was a distinct lack of music from new album Impera during the two-hour set, with first single Hunter’s Moon the first for fans to enjoy. “Do you like going to the movies?” asked Emeritus as he introduced the song, which featured on the soundtrack to last year’s Halloween Kills movie. As Ghost singles go, it’s not the strongest, yet it still packs one hell of a punch. Not as much of a punch as 2015’s Cirice, though, which rattled the RTM Stage’s trash cans and pounded through fans’ veins like a battering ram early on. Much like Cirice, Faith also left no prisoners in its wake. It wasn’t until just before the halfway mark that the show really hit its stride, levelling up from a great rock show to a memorable epic. This transition was largely aided by one of just four new songs on the night – Spillways. Ghost have never shied away from embracing pop sensibilities in and amongst all the noise, with this track combining the best of both elements in what could have been a massive hit had it come out forty years earlier. There’s something very special about Ghost’s ability to fuse elements of metal with the kind of pop ABBA would churn out, and on Spillways it’s a sight to behold. A clearly impressed Emeritus subsequently introduced Ritual (from debut album Opus Eponymous) as “a grower“, and it was justifiably met with one of the night’s biggest cheers. Year Zero, undoubtedly the go-to Ghost song, was met with just as much excitement. From its haunting intro to cataclysmic finale – and via bursts of fire and strobes – this is just one of those moments during a Ghost show which is hard to beat. Emeritus – appearing briefly in his full attire – serenaded the crowd in a way only he could: as music’s favourite pope from hell. He Is marked a rare moment of calm in the show, a breather of sorts before the final onslaught.

Miasma, the highlight from 2019’s Prequelle, is one of those songs you just can’t avoid when Ghost come to town. It’s a five minute instrumental epic which takes you on a feral sonic journey, warming you up with some soaring guitars before eventually picking up the pace and adding the layers. Towards the end, crew wheeled a coffin onstage before unveiling the deceased Papa Nihil. Breaking out of the coffin, Nihil stumbled before whipping out his saxophone and playing Miasma’s iconic sax solo to the best of his deadly abilities. It was one of the show’s most theatrical elements, picking up on the events of Prequelle’s ambitious tour (featuring a living Nihil on sax) and slotting them back into Ghost’s story. The crowd cheered on as Nihil grooved away before departing. Emeritus returned in a glittery blazer, bemused and asking the audience what he’d missed. This bemusement didn’t last long, though, with the main set ending on a fierce one-two of the gritty Mummy Dust and novelty Kiss the Go-Goat.

As we all know by now, the tedious wait for an encore tends to leave the stage shrouded in black. Not this time, however, as Emeritus stayed behind for a short chat with the crowd which quickly brought tears to some eyes. Initially asking the audience to applaud Ghost’s crew and RTM Stage’s hardworking staff, he quickly shifted his attention to the vulnerable people who have struggled these past two years. As he put it, these people have been through hell and back and likely made a very big step in their lives to come out to the show and spend time in the company so many strangers. It was a very human and sincere moment, and you could tell that plenty of fans could relate. It’s not been easy these last two years, and so being able to make it this far and come to a show is an uphill battle which many people overcame last night.

The subsequent encore was everything you’d expect from Ghost, and more. Last year’s brilliant cover of Metallica’s Enter Sandman felt like a unifying moment for everyone, with both the artists and the fans coming together and revelling in one of rock’s most iconic songs. Its quick transition into 2019’s Dance Macabre – perhaps Ghost’s strongest single – left no time for fans to breathe as its infectious chorus, pulsating rhythms and ABBA-esque harmonies combined to create an absolute beast of a track. Square Hammer closed out the night in glam-esque fashion, boasting yet another larger than life chorus which proved to be the ultimate and best way to end things. Square Hammer was a particular success in the United States, but that seems to have finally rubbed off on European crowds after a lacklustre response in Amsterdam last time round.

There’s no denying that Ghost put on one hell of a show, even if they have plenty of detractors in the metal community whose opinion on the band veers towards the cynical. Tobias Forge as Papa Emeritus is a pleasure to witness, a sight to behold. He’s always been a master entertainer when with Ghost, and as years have gone by he’s used this to his advantage while expanding on the intricate stories which make up Ghost’s compelling narrative. While expanding the narrative he’s also been able to take the music to a whole new level as well, never being afraid to try new things but always managing to let it sound like, well, Ghost. A lot of classic rock shows border on the über-clichéd, and although Ghost are certainly guilty of employing some of these tropes themselves, there’s just something about the entire show which sets it apart from the rest. The production is impressive, the light show dazzling, and crucially the music is top notch. The next step in Ghost’s story will be an intriguing one to keep tabs on, but rest assured that Tobias Forge will always have something exciting up his sleeve. Impera is out now. Check out more shots of the show below, taken by Anieck van Maaren.