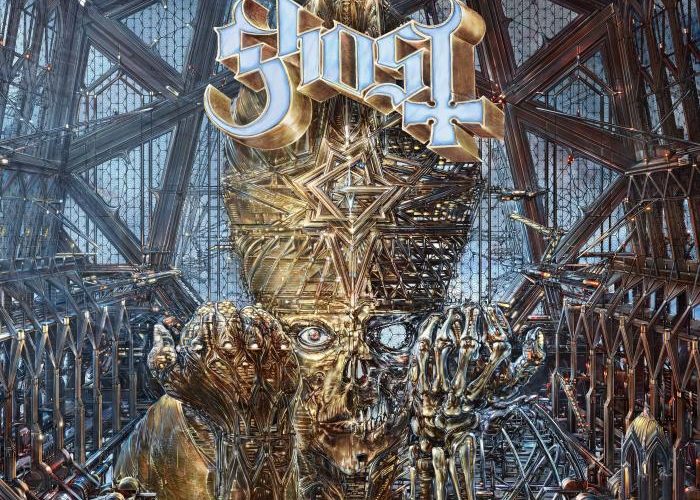 Ghost’s Impera: A Balancing Act Between Grandeur And Intimacy

When we stumble upon instances of life and art existing in parallel, the question often asked is whether life is imitating art, or if art is imitating life. Sometimes these imitations are intended, sometimes they’re coincidence. One thing is for sure, though: they coexist whether willingly or not. Last month, Russia invaded Ukraine. Now, the world’s eyes are on Vladimir Putin. This is life. Cross over to art, however, and you’ll find an eerie similarity throughout the stories told on Ghost’s new album. Impera takes place a few hundred years after the events of its predecessor Prequelle (2018), and it sees our main man Papa Emeritus IV at the reins of an evil empire. Empires always fall, and much like Putin, Emeritus is hungry for power. Impera is the story of an empire, and its release coincides with the horror we’ve seen unfolding in Eastern Europe. Art might not intentionally be imitating life in this scenario, but the resemblances are uncanny at best. Is Impera a worthy new chapter in the story of Ghost, though? In short, yes. But like with everything Tobias Forge does, there is a lot to unpack from the very first moment.

In order to understand the sonic shift which Ghost makes in certain places on Impera, it’s important to understand what came before it. 2018’s Prequelle marked the Swedish group’s most successful release to date, spawning hit singles in Dance Macabre and Rats while also allowing Ghost brainchild Tobias Forge to further explore new musical territories like folk and pop. For a ‘metal’ band, it was very much not your typical metal record; it was the kind which rattled the diehards while drawing in new enthusiasts. Impera has taken the sonic blueprints presented on previous records and funneled them through an 80s-tinged filter, complete with hair metal riffs, power ballads and occasionally corny lyrics. It’s almost as though Forge has looked at which big moments stood out on previous Ghost albums and used those ideas as the foundation for Impera. The album sounds like Ghost, yet bigger and better than ever before.

Grandiose opener Imperium is one of three short instrumentals on the record, setting the scene with plenty of pomp and bombast. Its sole purpose is to gear fans up for the first big curveball on the album – Kaisarion. It’s the happiest you’re ever going to hear Ghost, a band who never shied away from trying something new. At times it sounds like the theme song to a popular anime, but first and foremost Kaisarion is the explosive introduction to a brand new Ghost era. Elements of classic hard rock and hair metal sit firmly at the foreground, the chugging guitars turned down a notch. As openers go, it’s the boldest move the Swedes have made to date. Emeritus is hopeful; he’s in charge, and he has a cunning plan. Every Ghost album has that one song which is destined to be a big hit. The one which radio will play to death, and which will become a live staple for years to come. In the past we’ve had Square Hammer and Dance Macabre fill those boots. This time round it’s Spillways. This slow-burner revels you in with Cutting Crew-lite keys and keeps you interested by means of brash verses and a chorus which sounds like it was made of steel. It’s a brilliant piece of rock music, ticking all the boxes while avoiding the cliches and tropes which make up a majority of modern rock. Bonus points to Forge for using the spillway – a key feature in dam construction – as a metaphor for emotion. Slow burning lead single Call Me Little Sunshine makes more sense within the context of the album, as does the film soundtrack pick Hunter’s Moon.

The halfway point on the record is marked by Watcher in the Sky, a somewhat uptempo hard rock track spearheaded by a massive riff akin to some of Ghost’s best work. “Search lights, looking for a watcher in the sky” sings Emeritus as the song effortlessly switches between dark verses and bombastic chorus. The contrast between its downtuned, fierce guitar breakdowns and radio-ready chorus are enormous, allowing each part to have significant impact. The bridge turns things up a few notches, powering on through by means of monstrous rhythms and arpeggio guitars which at times sound like they’re at war with one another. They eventually come together as the chorus makes way for a fade out. You don’t hear fade outs very often these days, but then again this is also Ghost we’re talking about.

It’s on the brass-led and demure Dominion that Papa Emeritus IV’s reign takes a turn for the worse. While the first half of the album presented Ghost’s main man as a powerful leader, the second slowly starts tearing that down. Dominion sounds like a call to arms for a rebellion of sorts, although we don’t get to enjoy the fall of Emeritus’ empire just yet. If Impera was a musical, then divisive new single Twenties would be his villain song. It’s the most out there song Ghost have released to date, taking classic metal elements and juxtaposing them with a brash horn section, wacky vocals and the occasional hint of RnB. This is Emeritus’ big moment, his mission statement and a reminder to everyone how great of a leader he is. He’s in a celebratory mood and he wants everyone to know it. Twenties is as in-your-face and bold as Ghost gets, and somehow it works. It’s a conceptual high point on the album, which can only mean one thing: it’s downhill from here.

Standout track Darkness At the Heart Of My Love is the quintessential power ballad, once again ticking all the boxes. It sounds so incredibly safe on the surface, but if you listen closely you’ll be able to pick apart all of its unique sonic layers. From twinkling melodies and a momentous gospel choir to classic guitars and Forge’s crooning voice, it has it all. It’s one of Forge’s most heart wrenching songs to date, a true jewel in his (and Ghost’s) crown. “Remember always that love is all you need” sings Emeritus, and you can tell that he means it. Griftwood is a good track by Ghost standards, however it borders too much on a by-numbers formula which we’re all familiar with by now. “I’m your rock, baby” sings Emeritus in an upmost tongue-in-cheek manner, and although his intentions are clear it doesn’t quite work. The guitar work is a slight redeeming factor, but at over five minutes it’s perhaps also a tad too long.

Ghost are known for their grand finales, and on Impera this is no different. Respite on the Spitalfields (preceded by final interlude Bite of Passage) is the sound of a fallen empire, its leader reeling. “Did no one hear the distant thunder?” asks Emeritus, his voice devoid of the hope he had on Kaisarion. This hope is replaced by a pensive regret, and it’s made complete by emotive guitar lines (you know the kind), occasional bursts of vitriol and a chorus which doesn’t dare to look back but also has trouble looking forward. “We’re leaving the city, so this is farewell” declares Emeritus, but it’s anyone’s guess as to how this sets up Ghost for the next chapter in their intricately woven story. “Nothing ever lasts forever” proclaims the failed leader, his sadness drowning in a classic rock soundscape. As closing tracks go, Respite on the Spitalfields serves more than just its purpose. It closes an important chapter in the story of Papa Emeritus IV, reminding us that although nothing last forever, Ghost will still live on in some way, shape or form.

Previous Ghost albums have succeeded by throwing everything at the wall and seeing what sticks. This time round, though, Tobias Forge has already long figured out what sticks and is taking this recipe for success on a sonic journey of its own. The sounds we hear on Impera all sit closer to one another on a musical wavelength, with the absence of much stylistic experimentation clear for all to see (with the exception of Twenties). That doesn’t make Impera a weak album, though. On the contrary; Ghost have picked a winning formula and decided to hone it further. There are anthems (Kaisarion, Spillways), heartbreakers (Darkness At the Heart of My Love) and enough bombast to last a lifetime. Conceptually it’s another grand step forward, with fans already on the edge of their seats to see what happens next. Whatever Tobias Forge does next is bound to be exciting, but with the Impera campaign still in its infancy there will still be plenty to unpack for fans in the coming weeks. Art may not always imitate life, but something will always be there to remind us that they’re far more intertwined than you think. Impera is released this Friday (11 March).