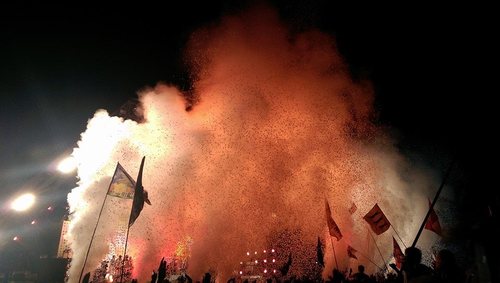 In June, some 130,000 revellers will once again descend upon Pilton for the 36th edition of the legendary Glastonbury Festival. With a line-up even bigger than ever before, making choices in Somerset this year will be an extremely huge problem for festivalgoers. For our first Glastonbury preview, we’re going to be focussing on the vast swathes of music which are set to descend on Worthy Farm at the end of June. Upcoming previews will further focus on the non-musical aspects of Glastonbury, including all the amazing attractions and events Glastonbury has to offer. For now, though, we present you with the first five (non-headlining) acts who we think you (if you’ve been so lucky to snag a ticket) ought to check out in June.

LCD SOUNDSYSTEM
James Murphy (below) has taken it upon himself to reunite his (now cult legendary) band LCD Soundsystem. Although you could argue that the band have only become this renowned since their huge Madison Square Garden ‘farewell’ and subsequent split, it’s a proven fact that Murphy is one of this generations finest and most talented musicians. Having worked with everyone from Arcade Fire through to David Bowie, Murphy is more than just your straight-and-narrow musician. This year, he’ll be touring the world with LCD Soundsystem once more, with their grand return having been cemented at Coachella last weekend. They hadn’t been gone very long, but their return has been so widely anticipated that Glastonbury seems the only logical next stop. OF MONSTERS & MEN
Icelandic folk rockers Of Monsters & Men are the kind of band who you have to stop and think about for a second. How did they get so big? Are they a one hit wonder? Why haven’t I checked them out yet? Their Glastonbury set in June will likely answer these questions and show you exactly why they may well become one of the biggest bands in the world sometime soon. The quintet’s most recent release came just over a year ago now, with them still riding the waves of success which Beneath the Skin brought them. They might not be the first name on your mind when checking out the line-up, but they’re definitely a hidden gem in and amongst the huge names. BLOSSOMS
If you haven’t heard of Blossoms, then prepare for that to change. The Stockport outfit are on the verge of breaking through, having already seen their psych-laden lad rock embraced by entertainment media the world over, most notoriously in their home country. Glastonbury will be one of their biggest shows to date, and it’s bound to prove to everyone why Blossoms are the next big thing. They haven’t been hailed as a festival headliner of the future for nothing, and all you need to do is listen to hit track Charlemagne to find out why. Don’t miss their Glastonbury set, because it may well be an “I was there”-moment. M83
M83’s new album Junk came out at the start of April, but it’s already shaping up to be an on-repeat album for the summer. From Do It, Try It’s smooth electro synth and Go!’s grandiosity to Laser Gun’s swaggering funk and Solitude’s hypnotism, Junk is one of 2016’s best records by a long shot. Frenchman Anthony Gonzalez’s group has, since 2001’s humble beginnings, grown from a small bedroom project into one of the world’s most popular ‘underground’ bands. Older hit Midnight City completely solidified this status, with the year of touring set to follow Junk prepared to cement this fact even further. If you miss out on M83 in Pilton this year then you’re going to be missing out on one hell of a good time. JEFF LYNNE’S ELO
Everyone loves a good classic, and this year’s Sunday ‘legend’s slot’ has been handed to the Electric Light Orchestra, now helmed by Jeff Lynne and renamed after him. With previous legend slots showcasing international stars like Dolly Parton and Lionel Richie, Lynne will have the opportunity to bring the famous Sunday afternoon slot home to the UK and instil some national pride into Worthy Farm for an hour. He’s bound to pull the classics out of the bag after all, and you wouldn’t want to miss that for the world and its (Mr.) blue sky. For the love of all things well and holy, make sure that you spend some time enjoying one of the nation’s favourite legends, Jeff Lynne. There’s so much to see and do at Glastonbury, which is why we’ll be dividing our musical focus sections into three separate editions. Check back next Monday for six more recommendations. You can find the line-up so far below. More names are set to be announced soon.