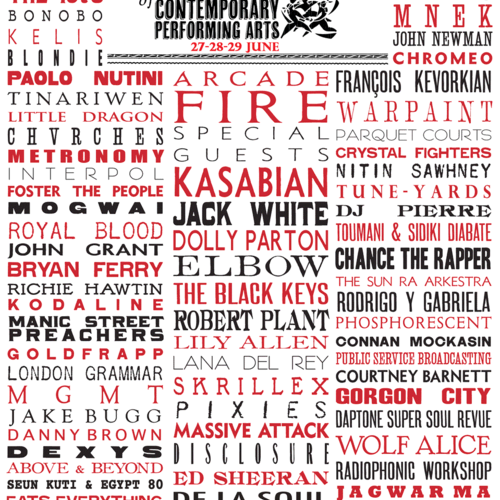 In just over 2 months’ time, 150,000 revellers will be setting foot on the holy grounds of Somerset’s Worthy Farm for the annual spectacle that is Glastonbury Festival. With this years’ line-up only being partially known so far (approximately 90 of the 1,000 or so acts), there are still a lot of questions yet to be answered, such as who the Saturday headliner will be! However, with the bands announced so far there are already plenty of amazing things to see, which All Things Loud have compiled below, in the first part of our ‘to see’ list!

Even though Glastonbury is never just about who’s topping the bill, this year’s currently announced headliners Arcade Fire and Kasabian are two bands you can’t miss! Canadian legends Arcade Fire released their groove-infused 4th album Reflektor last year to tons of critical acclaim, making their Pyramid Stage slot a highly anticipated one! Rumours have been spreading that the legendary David Bowie will be joining them onstage during their set, which is something he’s done before and therefore something you can’t rule out, especially at Glastonbury! Also making their headlining debut at the festival is the Leicester four-piece Kasabian, whose new album is set to be released in the same month as their Glastonbury show! Expect plenty of massive riffs, huge choruses and an all-round mind-blowing experience! Kasabian are band who cannot be missed live! The 3rd headliner this year is yet to be announced, with the likes of Metallica, Foo Fighters and Prince all being strongly rumoured!

Despite the amount of acts performing being in the region of 1,000, there are still plenty of big names appearing higher up on the main stages of the festival. Amongst these names are newer breakthrough acts such as Scottish trio Chvrches, psychedelic group Temples and indie rockers The 1975. Their sets will be some of the most anticipated sets of the weekend, alongside sets from established acts like Jack White, Elbow, The Black Keys and Pixies. There are also set to be performances from bands who many expect to make a big breakthrough very, very soon. This includes Arctic Monkeys’-supporting duo Royal Blood, New Yorkers Parquet Courts, Australian singer-songwriter Courtney Barnett and London indie band Wolf Alice. Of these four, Royal Blood seem most tipped for success following a stint on the NME Award Tour and receiving critical backing from many websites and fellow musicians. Glastonbury prides itself on exciting new music, with other new acts appearing this year including London Grammar, Chloe Howl, Jagwar Ma, Chance the Rapper and John Newman. It’s also worth noting that there’s quite an electronic presence this year, with James Blake, Bonobo, Jamie XX, Gorgon City, DJ Pierre, MNEK and heavyweights such as Skrillex and Disclosure all being confirmed so far.

Of course, Glastonbury wouldn’t be Glastonbury without the obligatory ‘classic’ acts. Taking up the classics slot on Sunday this year will be American country legend Dolly Parton, hoping to make her Worthy Farm debut a memorable, laden with hits such as 9 to 5 and Joleen. This year, she will also be joined on the line-up by other classics such as Blondie, Dexy’s (formerly known as Dexy’s Midnight Runners, well known for their hit Come on Eileen), Robert Plant & the Sensational Space Shifters, Bryan Ferry and Bob Marley’s former backing band, The Wailers. These kinds of sets are the ones that satisfy the older crowds by bringing about plenty of nostalgia whilst reeling in the younger generations.

Looking at the line-up though, and knowing that it’s nowhere near complete, you can already see the list of world music names starting to appear. As ever, Glastonbury has a diverse range of acts from all over the world appearing, and this year is like no other. Alongside the massive names, you’ve got the likes of Seun Kuti & Egypt 80 and Toumani & Sidiki Diabate also appearing.

As well as the new bands, the headliners, the classics and the legends, there’s always a strong collective of bands who are just all round great and definitely worth checking out this year, for example Irish group Kodaline, English legends Manic Street Preachers, noir-pop singer Lana Del Rey, guitar-mavericks Rodrigo y Gabriela, all-female four-piece Warpaint, Joe Mount-fronted Metronomy, Americans Foster the People and NME Awards Tour headliners Interpol. Jake Bugg is back again this year as well, with Rudimental, Massive Attack and De La Soul completing All Things Loud’s list of bands you have to see at Glastonbury 2014.

View the full line-up so far below. Glastonbury takes place from 25-29 June.