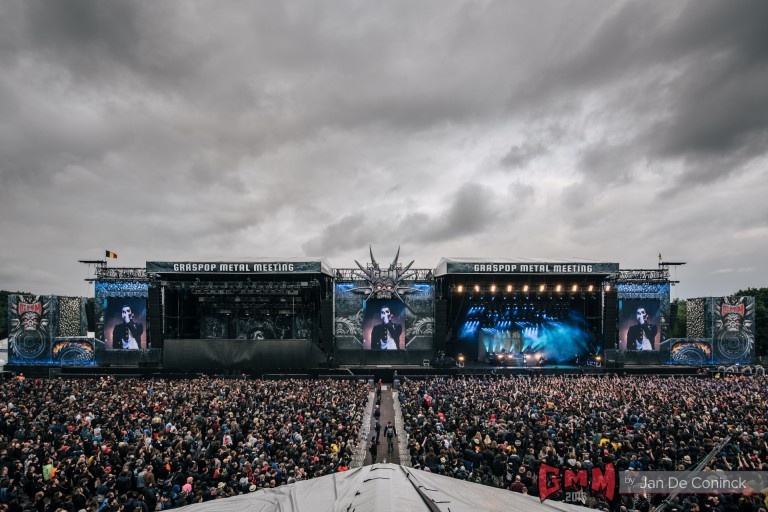 There are many different European metal festivals currently battling out for the title of most prestigious, an intangible title which removes all prior insignificance and gives organizers a feeling of superiority which they seamlessly weave with marketing techniques that enable sell-out editions year upon year. Dessel’s very own Graspop Metal Meeting is one such weekender, sitting atop the metal calendar year upon year as it presents the music world with some of the best and heaviest line-ups this day and age has the pleasure (or displeasure, depending on where you sit) of witnessing. This year is no different, with the likes of Deep Purple, Rammstein, The Scorpions and Evanescence topping a bill which spans far and wide throughout the metal spectrum. We’ve picked five must-see acts for this year’s edition of Graspop Metal Meeting.

THE DEVIL WEARS PRADA (Friday, Jupiler Stage, 20:55)
The opening day at Graspop Metal Meeting looks set to be one which hits festivalgoers with an instant barrage of riffs, riffs and more riffs. In and amongst all of the well-curated madness you’ll find metalcore outfit The Devil Wears Prada on the alternative/emo-tinged Jupiler Stage. The Mike Hranica-fronted outfit have been touring their intense new record Transit Blues at a steady pace for nearly a year now, and their festival-filled summer will peak with a set at one of Europe’s biggest metal meetings. Expect nothing less than fury courtesy of Hranica and his bandmates, because it wouldn’t be a Devil Wears Prada show without a healthy dose of chaos and unruly behaviour.

RAMMSTEIN (Friday, Main Stage 1, 00:00)
German metal titans Rammstein haven’t released a proper studio album since 2009’s highly controversial Liebe ist für alle da, which caused so much commotion amongst the German Federal Department for Media Harmful to Young People that the band couldn’t make it available in its gory entirety until June 2010. This is the kind of controversy which Till Lindemann and co. rely and thrive on, as it enables them to keep creating art which remains firmly in the public eye, whether it be due to undying praise or ongoing scrutiny. Their upcoming seventh studio album isn’t due until the end of 2017, but they’ve already been touring quite some bit in order to warm up the world for what looks set to be their defining musical statement, complete with absolutely manic live show and its own controversies. Watch out Dessel, because Rammstein won’t be taking any prisoners come 16 June.

ARCHITECTS (Saturday, Main Stage 2, 14:55)
The last twelve months have undoubtedly been heavy for Brighton’s heaviest sons, Architects. Having lost guitarist Tom Searle to cancer last August, shortly after the release of magnum opus All Our Gods Have Abandoned Us, it’s since been up to Sam Carter and co. to bring their music to audiences around the world in honour of their fallen brother. There are rumours that this album will serve as their final one, and if that does turn out to be the case then now is definitely the best time to catch the band doing what they do best. Regardless of the future, though, Architects are just a bloody brilliant live band whose stage show can’t be missed.

WHILE SHE SLEEPS (Saturday, Jupiler Stage, 18:25)
If there’s one band around right now who definitely have plenty to get off of their chests, it’s Sheffield quintet While She Sleeps. The Loz Taylor-fronted collective just put out the massive You Are We, an album which has undoubtedly catapulted them into the upper echelons of metalcore whilst also having a deserved dig at the record labels who have ensured that all money goes to those at the top, and not to the creators. It’s a point which guitarist Mat Welsh discusses in great detail during our recent interview with the band, and you can read that here. Once you know what While She Sleeps are all about, there really is no going back. If that doesn’t justify your decision to descend upon the Jupiler Stage on the festival’s second day, then we don’t know what will.

AIRBOURNE (Sunday, Main Stage 1, 15:00)
Aussie hard rock outfit Airbourne have been hailed by many as the spiritual heir to AC/DC’s soon-to-be-reclaimed throne, and there isn’t much you can say to prove otherwise. Joel O’Keeffe is one of modern day hard rock’s most enthusiastic and exuberant vocalists, bounding about stages relentlessly with his bandmates (guitarist Harri Harrison, bassist Justin Street and brotherly drummer Ryan O’Keeffe) to a point where it almost becomes hard to keep up with their hair-flipping, guitar-swinging antics. If you’re not standing in the near vicinity of Main Stage 1 on the festival’s final day, then you’ll be needing a pretty good reason when friends ask why you missed the future of hard rock tearing open a new arsehole especially for Dessel.

Check back soon for a second Graspop preview. Click here to get your tickets for the festival, which takes place from 16-18 June in Dessel, Belgium.