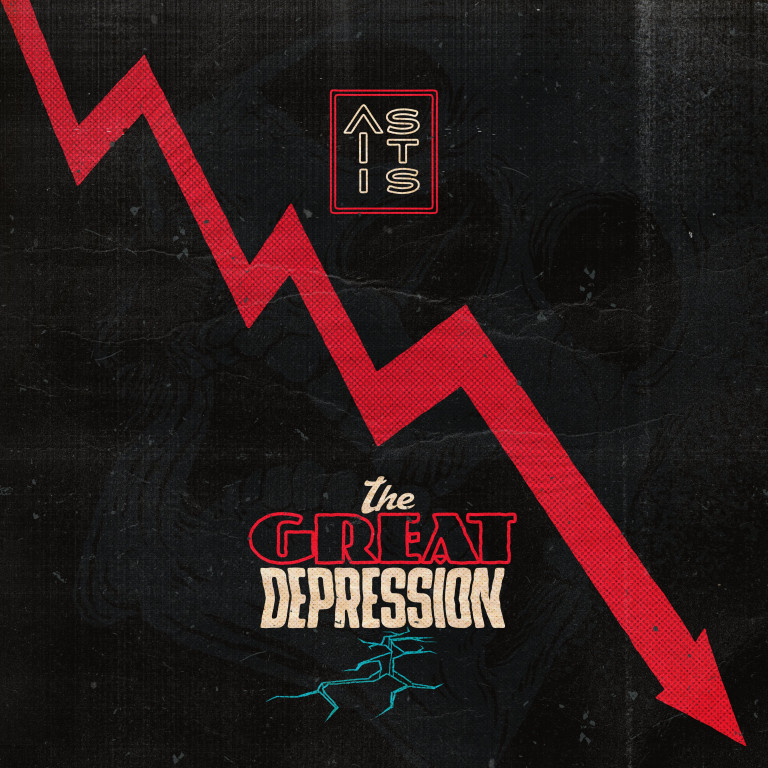 As It Is’ The Great Depression: A Step in the Right Direction, But No Raging Success

It takes a lot of bravery and confidence for a band to throw everything they know out of the window and take on a new lease of life. Even more so when that lease of life entails tackling the incredibly tough, sensitive and stigmatised topic of (male) mental health. It’s a topic which is close to As It Is frontman Patty Walters’ heart, and one which he’s put at the centre of his band’s new album, The Great Depression. It’s an album which – after many years in the making – sees the quartet brush off their glossy, happy-g0-lucky pop punk in favour of something which is darker, vicious and unafraid to stare you down with brutal honesty. It’s also an album which highlights the severity of mental health and its modern day perceptions within our hyper-digitalised society. Most importantly, though: it’s an album which gives the voiceless a way of being heard.

Conceptually, Walters and his band have hit the nail on the head with The Great Depression. They’re brute in their metaphorical and literal deliveries, something which Walters has often shied away from on past releases to the extent he does so now. However, does it musically match up to the heavy subject matter, and does it make for an impressive overall end result? In short, both yes and no. The Great Depression is divided into four acts, all of which outline a different stage of dealing with depression (Denial, Anger, Bargaining and Acceptance). The first of these, Denial, is spearheaded by frenetic lead single The Wounded World, a track which Walters uses as a device for laying the blame. He doesn’t lay the blame on any old poor soul, though; in fact, he blames us all. “Brothers, sisters, young and old, we’re all to blame for the wounded world” he boldly proclaims, essentially boiling it down to modern society’s progression being the reason for the way the world is today. His subtle vocals (which sometimes become screams) imply that vicious circles are what lead people in to feeling the way they do. This is all accompanied by a slickly produced mix of by-numbers alt rock, bordering on the pop-punk whilst doing its best to sound bigger and angrier. Think mid-2000s radio friendly post-hardcore, but then with overproduced vocals. Overproduction isn’t necessarily a bad thing, but when Walters tries to interject screams into his missives it sounds painful more than it does impactful. It’s a trend which is repeated throughout the album to varying degrees of success. Take album opener The Great Depression, for example. Its intro makes use of programmed percussive beats and plucked notes, before kicking into an incredibly melodramatic chorus which – although the comparison will irritate some – does little to avoid imitating My Chemical Romance at their grandest. It’s borderline theatrical, right in line with the album’s gloomy visual direction and general theme. Had this song been on The Black Parade, then nobody would bat an eyelid.

“She holds my hand, but it doesn’t feel the same” howls Walters at the start of The Fire, The Dark, the first slow-burning track on the album. It’s an attempt at a lighters-in-the-air anthem, but something feels incomplete. Is it Walters’ misplaced growls in the verse, or is it the lack of instrumental substance throughout? Combined, both elements make for a track which feels like it’s just short of the mark musically, despite its obvious best intentions. The same can be said for fellow ballad The Question, The Answer (part of act two, Anger). It centres on a synth organ and faux-handclap beats, both of which underpin Walters alongside a lilting acoustic guitar. It just feels incomplete, failing to hit the big grand finale which it sounds like it’s building up to the entire time. There’s obviously a reason this doesn’t happen, but from an outside perspective it feels off. It isn’t until The Reaper, a collaboration with Underøath’s Aaron Gillespie, that The Great Depression is met with its first highlight. Ben Langford-Biss’ guitars are gritty and fierce, whereas Patrick Foley and Ali Testo’s rhythm section packs a real punch. All three are incredibly talented musicians, which makes it a shame that their best potential is sometimes not as realised as it could be. The Two Tongues (Screaming Salvation) flitters between energetic and peaceful moments following the clever use of a vintage 20th century sample (laced in feedback) at the start, yet the one thing which seems unfortunate about its overall execution is the initial disparity between memorable moments and verses which hardly stick with you afterwards. There’s some substance to the track once it picks up pace halfway, but it isn’t until the heavy-as-fuck finale that the track has anything which is musically memorable. Even then, it feels like it’s ended too soon.

The Truth I’ll Never Tell is a stronger moment on the album, maintaining a solid pace which doesn’t hold up for anyone or take prisoners along the way. It finds itself at the close of the third act (Bargaining), making way for what should be an interesting finale – Acceptance. The Haunting is the first of Acceptance’s three tracks, with Walters once again blasting societal norms (“this system doesn’t sell the truth, so death to you”) over a mix of lighter instrumental constructions. It’s musically not as dark as the rest of the album, and it provides a glimpse of hope in the face of adversity and midst of despair. There’s a subtle nod towards the #MeToo movement, too, with Walters singing of idols who “ease your mind, then cross the line”. He doesn’t hold back here, and that’s important. Penultimate track The Hurt, The Hope is another slow-burner, succeeding where The Question, The Answer failed. It builds up towards a big ending, and it’s met by one as Walters declares that “it’s gonna get better” at the top of his lungs. He sounds optimistic, his voice filled with hope and the underpinning music filled with matching power. The opening thirty seconds of final track The End sound like a pop-punk Bon Iver circa 2016 thanks to some watery vocal harmonies, before heading down a by-numbers pop punk path which provides hope but doesn’t serve as the start of a blinding finale. Penultimate track The Hurt, The Hope seems better suited to closing out the album, having blasted out heaps of optimism and hope which are almost countered by The End’s less impactful first half. The only redeeming factor which contributes to The End serving as the final track on The Great Depression is Walters’ emotive rally cry, which is sure to be an emotionally intense moment during their upcoming album tour. “This is the end” mutters the frontman as the song comes to an end, calling the curtain on what has transpired to be an interesting conceptual journey.

On The Great Depression, As It Is have made an album which stays true to their intentions and will undoubtedly go down well with diehard fans and earn them new ones. Its subject matter will resonate with those who feel isolated, ostracised or simply down on their luck, and it’s an important device in giving these people a voice. It would thus be unfair to critique Walters on his lyrical work, as it’s very clear that these words carry a lot of personal significance and meaning to him. Musically, though, it often just does not click. There a glimpses of brilliance (The Handwritten Letter, The Reaper and The Hurt, The Hope), but more often than not – and particularly on the slower tracks – it feels like something is missing. This is a shame, because there was definitely potential for As It Is to come out with an album which could match the critical and musical success of many a famed concept album (The Black Parade, to name but one semi-relevant example). Having said that, though, The Great Depression is a step in the right direction for As It Is, even if there are things which could have been approached differently. It’s definitely not a flash in the pan or failed attempt at something grandiose, but it’s also not a raging success. The Great Depression is due on Friday, 10 August via Fearless Records.