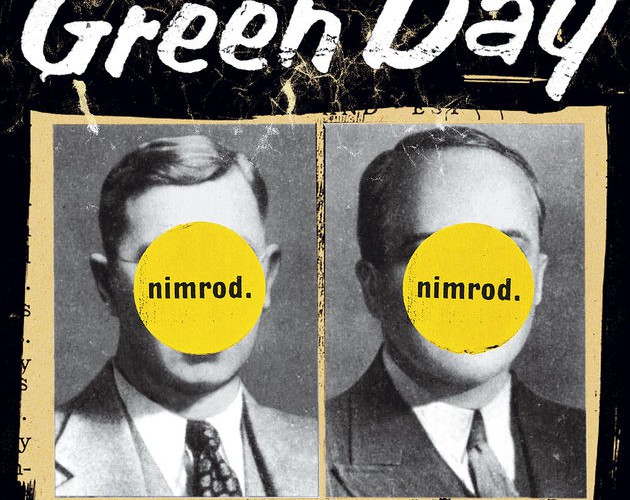 The iconic artwork for Nimrod, as designed by Chris Bilheimer

A piece by Mark McConville

In 1997, Californian band Green Day released their most underrated but diverse record in the form of Nimrod, an album bubbling with hooks and dark edged lyricism. The band had to prove they were still relevant after the disappointing Insomniac, a record which did have its hits, but never hit those meteoric heights. Dookie did so in 1994. That opus brought Green Day into the limelight, a light so vibrant and crucial. Dookie was a statement of intent, a colossal compendium breaking boundaries, a piece of punk layered with snotty nosed mellow drama. It truly rooted Green Day into the big time, overthrowing their past records. But, as they grew, tensions did too, and the band was banished from Gilman Street, a punk club where many acts nurtured their souls and tweaked their sounds.

As Green Day prospered, many people became distant, fans who loved the band walked away. This is when they became a goliath act, securing places at biggest festivals. But, as they put their pen to paper, their punk laurels were fading. Not to say that the band was forgetting their roots, they just had to grow, they had to burst and breakaway. Green Day were a major label band when they signed to Reprise in 1994. Some people think the band shot to fame with their seminal record American Idiot all those years later. So the act was making millions well before Jesus Of Suburbia was constructed, they were flying the punk flag through the flurry of scepticism.

And Nimrod pushed Green Day into the light even more so with a ballad that shook the world. That melodic heart-puller is Good Riddance (Time Of Your Life). It’s a song many play at their wedding day, it’s a song which resonates and showcases lead singer/guitarist Billie Joe Armstrong’s impressive writing talent. Good Riddance sent Green Day onto the airwaves, although it angered the punks and estranged. They were blasting the band for their decision to put a ballad on one of their albums. They thought the act was selling out, nipping at the arms of greed, shooting for the pot of gold. But, Green Day didn’t surrender and moved on up regardless. Nimrod may contain one of Green Day’s most poignant scores, but the record as a whole is punk infused. Nice Guys Finish Last is a blistering, guitar driven masterclass. Redundant mops up the fragments of punk’s inner core, and cools it down as Armstrong sings with ease and great tone. Reject is a fast-paced pile-driver, it’s in your face. So many of these songs return to the punk days. And that shows us Green Day aren’t leaving their signature sound to rot, they never have cascaded into bubble-gum pop territory, they have tweaked it, adding more complexity. This complexity is heard on American Idiot. A record which saved the pioneers from truly derailing. It’s an album many hate, but many people love the diversity it showcases.

American Idiot may be Green Day’s most popular and audacious LP. But there’s flashes of this magic on Nimrod. The true intensity it creates, the darkness it exudes is believable. It may not be their magnum opus, but what it is, is something which strikes punk into veins of those seeking a thrill.

Listen to Nimrod below.