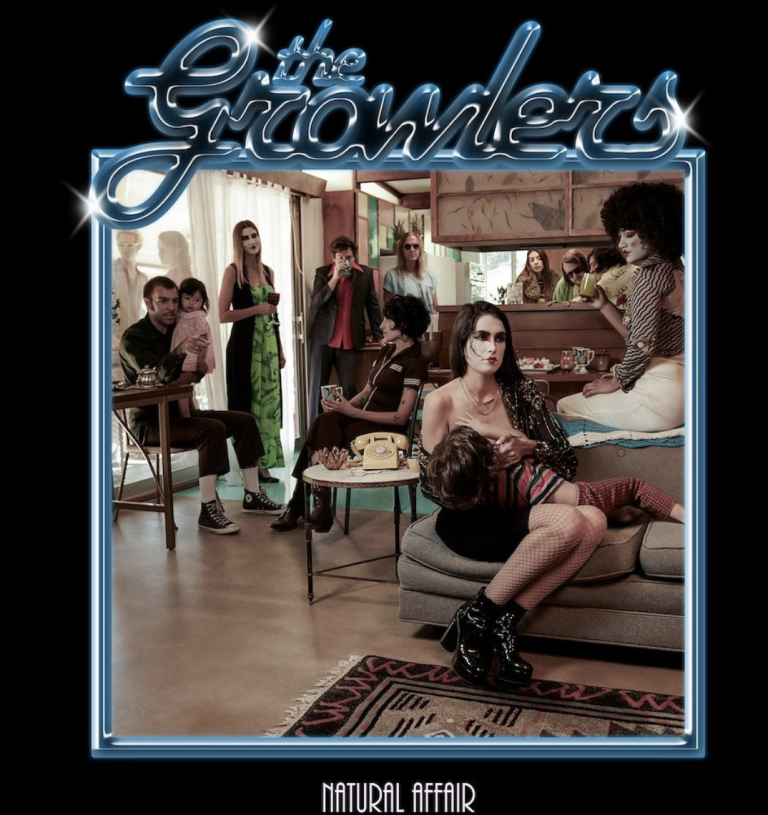 When you’re as prolific as The Growlers, it often pays dividends to go back to the drawing board and reconfigure everything which made your music so appealing in the first place. On Natural Affair – their seventh full length in ten years – they stray slightly further away from the classic ‘beach goth’ sound with which they made their name back in the day. 2014’s Chinese Fountain marked the first signs of this sonic shift with its slick grooves and lilting synths, but it wasn’t till 2016’s City Club that Brooks Nielsen and co. really bode farewell to the surf riffs, dark rhythms and LSD-fuelled jams. The world of The Growlers has since been a whirlwind of constant touring, the occasional release (last year’s Casual Acquiantances collection stands out) and – as of this coming Friday – a brand new full length.

Of course, it’d be ridiculous to say that Natural Affair bears zero resemblance to The Growlers fans grew to love over the years. In fact, it’s probably the closest they’ve come to sounding like themselves in years. Opener and lead single Natural Affair ticks all the right boxes, fusing layered guitar licks with a timeless neo-funk groove and Nielsen’s forever recognisable vocal drawl. “Girls should rule the world, it’s true” he sings ahead of the chorus, one which is lathered in silky sweet tones. It sets the bar high for the rest of the record, with Long Hot Night (Halfway to Certain) a neon-infused exercise in mid-tempo radio rock. There’s warbled synth melodies, tight percussive rhythms and chant-worthy lyrics galore throughout, a trend which remains consistent throughout the entire record. Previously released Pulp of Youth is a good example, slowing down the pace in a similar manner to penultimate track Try Hard Fool. Both tracks place emphasis on Nielsen’s trademark snarl, his voice reminiscent of a time we all long for. Natural Affair meets its first major highlight in the groovy Social Man, a track which tears a page out of Wiliam Onyeabor’s handbook. Nielsen sings of social isolation over a bustling bass line and cacophony of percussion, referencing shooting stars and caviars. “A social man must remember how to disconnect” he muses, perhaps in reference to himself. Nielsen, as some may know, lives pretty off the grid and isn’t on any social media. Second single Foghorn Town follows, bringing with it another memorable chorus which evokes the kind of emotion only The Growlers know how. If you liked City Club highlights I’ll Be Around and Night Ride, then Social Man and Foghorn Town are right up your street. Different, yet still on a similar wavelength.

Ahead of release, the band put out four singles. Three of these appear in quick succession early on, and although they’re all worthy tracks in themselves it’s the second half of Natural Affair where the magic really happens. The sombre Shadow Woman has its percussive experimentation to thank for its unique sound, even when paired with a pretty solid and radio-friendly chorus. Nielsen pays homage to his own shadow woman (“all I want is you, all I know is me“), whilst also touching upon loneliness (“don’t ever leave me alone“). As one of the more laid back tracks on Natural Affair, it certainly serves its purpose well. The Growlers are very good at making a distinction between ballads and tracks which are somewhat laid back. Truly is the first real ballad on the album, and it sounds like Spandau Ballet if they lived in Topanga Canyon. Opening on a hazy synth line, the slow burner slaps you right in the face with an emotionally laden chorus. “I only wish I had heard it from you first” preaches Nielsen as he references commitment and honesty. They’re very simple lyrics, contrasted by a layered instrumental backing which slowly introduces more synths and the occasional bongo. Once a second layer of echoed vocals enter the frame, Truly truly (ha) becomes a sight to behold. Tune Out is the weakest track on Natural Affair. It’s not filler per se, but its chorus doesn’t hit as hard as any of its counterparts. Having said that, it’s still a nice bit of jangly surf pop (and the second half definitely redeems a weaker opening two minutes).

Let’s get one thing straight before we continue: Coinstar is one of the best songs The Growlers have put out to date. It’s a three minute slice of country soul spearheaded by saloon-esque piano line, nostalgic guitar lines and one of Nielsen’s best vocal performances yet. His delivery sounds half-hearted, perhaps even defeated, but still filled with genuine passion. “I’m the coinstar, blinking in the shine of the moon” he declares, calling himself a “dreamer” and a “sucker” later on. It’s not the kind of track which will hit you like a steam train; instead, it’ll grow on you until you realise its serenity. Stupid Things picks up the pace, leaning more towards a mix of upbeat country folk. It’s curiously funky in places, and definitely the kind of song you could line dance to. It’s not the strongest track lyrically, although Nielsen’s honest delivery does somewhat mask its simplicity. Natural Affair comes to a close on Die and Live Forever, a defining and energetic finale. It bears reminiscence to 2016’s Dope on a Rope, travelling at a similar pace whilst being a whole lot more emotionally charged. “You might not like it man, but I’m your brother and I’m going nowhere” states Nielsen from the off, his unifying tone rounding off the record in an utmost positive fashion. It’s all about (as the title suggests) living forever with your brother by your side regardless of what life throws at you. There couldn’t possibly be any better way to end the record, because what’s the point of life if you can’t love and suffer together?

Over the course of 41 minutes, The Growlers have created an album which comes incredibly close to being their magnum opus. Its twelve carefully constructed love songs place Nielsen at his most heartfelt and – in places – fragile, the music incorporating fresh new elements whilst being unafraid to look back. There isn’t a single disappointing song on Natural Affair, something you can sense in the immaculate crafting of each track. Everything’s taken care of, from all of Nielsen’s vocal inflections to the multiple instrumental layers on each track, however intricate or subtle they may be. Don’t expect another Hot Tropics or Hung at Heart, because those days are gone. But as time passes, Natural Affair will go down as The Growlers’ crowning glory. Natural Affair is due Friday (25 October) via Beach Goth Records and Tapes.