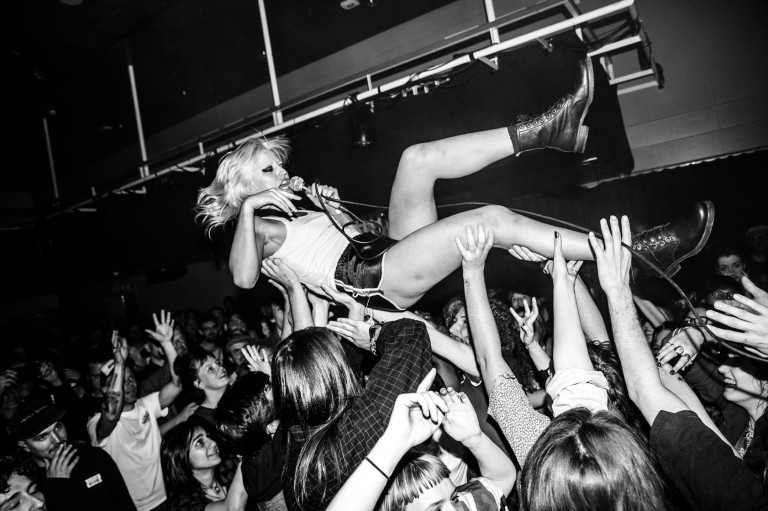 Hardcore, Lockdowns and Comfort to Me With Amyl & the Sniffers

Back in 2019, Amyl & the Sniffers almost single handedly took over the rousing punk scene with their ferocious and high octane songs. Frontwoman Amy Taylor’s stage presence alone was enough to captivate audiences, with her voice a rowdy powerhouse among the madness. Next week, the Aussie quartet will release their hotly anticipated sophomore album Comfort to Me. Jack Parker called up drummer Bryce Wilson and bassist Gus Romer to talk lockdowns, hardcore influences and how the new album came to exist.

Hey guys. How are you doing?
Bryce: Not bad, not bad. I can’t complain.

What’s the situation in Australia like right now?
B: It’s still kind of fucked. New South Wales, the state above us, is fucked and we’re still in lockdown here in Victoria which is pretty shit.

Comfort to Me is your new album and it’s out next week. What’s the biggest difference between this record and your 2019 self-titled?
Gus: It’s the next step for us I guess. We’ve improved a lot as musicians with our instruments and also lyrically in Amy’s case. Apart from that it’s just us in a different time and in a different place.

A bit like a snapshot or time capsule of who you were in that moment basically.
G: Yeah, totally. There’s not been a great deal of thought put into it, as in it isn’t an extremely conscious record.

Did you feel any of the ‘second album syndrome’ pressures some bands face?
G: Nah, I don’t think so. Half of the record was written in and out of lockdowns and we recorded it while the world was burning down around us. We didn’t give it too much thought, we were just really happy with it and that’s what matters to us.

There are moments on the album where you almost veer towards hardcore, for example Freaks to the Front. Was this a conscious change in direction?
G: That was all pretty natural.

B: Yeah, all of us consume or have consumed a fair bit of hardcore punk and anything else of the sort for a long time now. Those international and local hardcore bands have been a big part of our musicality, so it was pretty sick to chuck one or two hardcore punk songs on the album. They’re so much fun to play.

The new album artwork is quite trippy. Tell me more about it.
G: It’s a caricature of Amy’s face exploding. There’s not really anything to it, the artist just sent us shit and we were like, “ok, cool”.

So about the rest of this album’s visual direction? What inspired that?
G: It’s just the crew that we work with. The two videos we’ve done so far were with PHC Films who’s great. We ourselves haven’t had a great deal of input within this cycle of the album.

B: We’re kind of rubbish at visual creativity and anything of the sort so we just surround ourselves with people who know what they’re doing and let them do it for us.

PHC is great. I love his work with King Gizzard & the Lizard Wizard.
B: Yeah. We just finished filming the next video too; it’s really nice to have some slick quality stuff.

For a band who really cut their teeth playing live, the absence of live shows has obviously been shit. Did this inability to “road test” new songs impact the way you approached this record?
G: Not at all. We don’t write for the live shows, if we like the music and what we’re doing then we’ll convey that to our audience. We can’t please everyone, there’s always going to be stuff that people will gravitate more towards than others. We don’t consciously think about if a song would be good or not live.

Have you encountered any of the initial struggles or challenges that come with self-releasing an album?
G: Nah, it’s been pretty smooth. We’re doing it together with Caroline and we have a distribution deal with them. We make the calls and they help us out.

Why the choice to self-release?
G: We’d been talking about it for quite a while. It basically just gives us way more control and ease, just being able to handle everything ourselves. In the future we have the option to release other music as well if we wanna work with other artists which is cool.

There are loads of artists who broke through during the pandemic and who haven’t even had the proper chance to play live. Has the Australian scene thrived during all these periods of forced isolation?
B: No. If you ask me, I couldn’t tell you who the up and coming bands in Melbourne are. Most of the time I consume music at gigs, and now that isn’t happening we don’t have a clue. It kind of feels like there isn’t a scene at all at the moment. That’s the general consensus among the four of us, and it’s quite hard to feel in touch with it too.

G: And of course we’re back in lockdown so there isn’t much going on.

You guys lockdown even if it’s just a handful of cases, right?
G: Yeah. In Victoria they do it on 10 cases, and in New Zealand it’s, like, one or two?

I heard the vaccination process is also quite slow in Australia at the moment.
G: It’s fucking dogshit, all of the misinformation out there about the vaccine being hard to get here. I’m fully vaccinated, but Bryce and Dec (Martens, guitar) are halfway there. It’s not as smooth as it should be but hopefully more people just fucking get the vaccine.

Hopefully at some point next year you can take this album on the road again, but have yo had time to think about what’s next? How does this album set you up for the future?
G: We haven’t toured in eighteen months, so I guess right now we just want to play the new songs. The prospect of being able to share the music live is something we all really want to do now. It’s nice to build the chops back up as well, because these songs are a lot harder to play. We’ve got to work pretty fucking hard to get them going! Comfort to Me comes out next Friday (10 September).