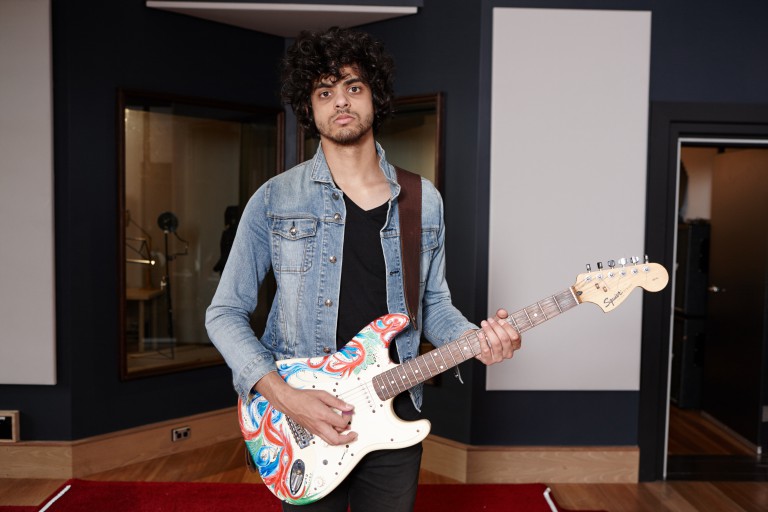 Harts: “It was an amazing experience to have a mentor like Prince”

Here’s a name you’re not going to forget anytime soon: Harts. The musical project for which Aussie Darren Hart is responsible has already seen plenty of success back home, with the musician now having a stab at Europe. This month, Hart will take his vast, funk-laden output to shows in Amsterdam, Berlin and Paris, as well as a set at Pinkpop Festival. We called him up to talk new music, the Australian music scene and what it was like to be mentored by Prince.

Hey Darren! How are you doing?
Good thanks!

Enjoying Amsterdam?
I love it, it’s really nice. I got a chance to walk around and see the park yesterday, but today I’m just at the office doing interviews.

Let’s start by talking about Prince. He played a huge part in your discovery, but how did that come about and how did your relationship with him continue?
He discovered me through some YouTube videos in which I’d play all the instruments at the same time, and he was really intrigued. The guitar playing stood out to him, and one day he wanted to meet me. Prince phoned me and said how much he liked I was doing, before inviting me to play some music with him at his estate in the US. I went there for a week and learnt a lot of music from him. I also played a lot with him and witnessed some of his recording sessions. We jammed a lot and talked often in a one-on-one setting about the industry, my goals and the lessons that he learnt.

Prince tried to impact that knowledge in me and help me out in any way that he could. He was really excited about the future of music and really wanted me to focus on guitar playing. He was trying to persuade me to be more than what I was at the time, which was an all-round musician, songwriter and producer. Since then he always kept in touch with me and kept tabs on what I was doing, all the way up until he died. It was an amazing experience to have a mentor like that and I’m still in shock.

You’ve just released the 5-track Breakthrough EP. Can you tell me more about the recording process and how it came to be what it is today?
I released a record in 2014 called Daydreamer, and that was more influenced by the funk/pop side of what I do. Breakthrough was about me being inspired by what Prince wanted me to focus more on: guitar, as well as the sounds of artists that inspired him. I combined that with funk similar to Earth, Wind & Fire and Sly & the Family Stone. Prince really inspired the direction of Breakthrough.

In what way does it stand out compared to Daydreamer?
It’s a lot more rock-based. Breakthrough is heavier in terms of its rock side as opposed to its funk side, and that’s really what differentiates it.

And what logical progression do you see taking place from here on out?
I’ve just finished working on a second studio album, and the progression is really diverse. It covers a lot of different styles, but at the same time I’m learning a lot from the Breakthrough EP. People love my guitar playing and the live shows, and now I’m trying to find the unique sound which I can call my own – the funk stuff, the soul stuff, and even the hip-hop stuff. I’m really getting into that hip-hop scene at the moment, and I really want to push the boundaries of who I am as an artist.

Which hip-hop artists have been influencing you?
More of the late 90s and early 2000’s hip-hop where they sample a lot of music from the 70s. Contemporary hip-hop acts like OutKast have a lot of those elements, just like Gorillaz in their early days; those things influence me more. I do really love Kendrick Lamar too, as well as anyone else who makes that kind of music.

It’s quite hard to consider that you do this all by yourself. How did you start out musically?
I started out playing drums at first, which was when I was 16 and still at school. After I got more into music I wanted to start playing more melodically, so I chose guitar as it was the easiest instrument I could get my hands on. I bought a cheap little acoustic guitar which was all I could afford. At first there was no real ambition to be a musician or songwriter, as it was something I did just for fun. After I did that for a while I started playing bass, keys and eventually started singing. It was always just for fun, and I never had the ambition until people started listening to what I was making and playing. They started encouraging me to put it all online because they loved it. From that point onwards I put stuff online and people started sharing it on YouTube and Facebook.

Would you ever consider Harts becoming a full-on band with more than one member?
I’m not quite sure. For the time being I have so many musical ideas on my mind that I wanna get out there, and those are ideas that I have by myself as a solo artist. I still really dig bands and I’m traditionally from a band background. I played drums in bands at school, so for me to be a solo artist is actually quite a different challenge which I’m currently enjoying. In the future I do want to meet like-minded musicians and collaborate, but maybe not under the name Harts.

So what’s the music scene like back in Australia?
Melbourne is very much a rock city. There’s a lot of rock bands out there, but EDM is also becoming absolutely huge across the whole of Australia. It’s been on the rise for a long time and it’s really taken over in terms of what’s popular in Australia. I think that bands are slowly dying, and some of them are also going for a two-piece set-up simply due to logistics and monetary reasons. It’s very hard for a band in Australia to make a living out of being in a band on full-time. Like I said, Melbourne has always been a rock city and I don’t think it’ll die out here. But that’s just my opinion.

Harts’ new EP, Breakthrough, is out now. Stream it below.